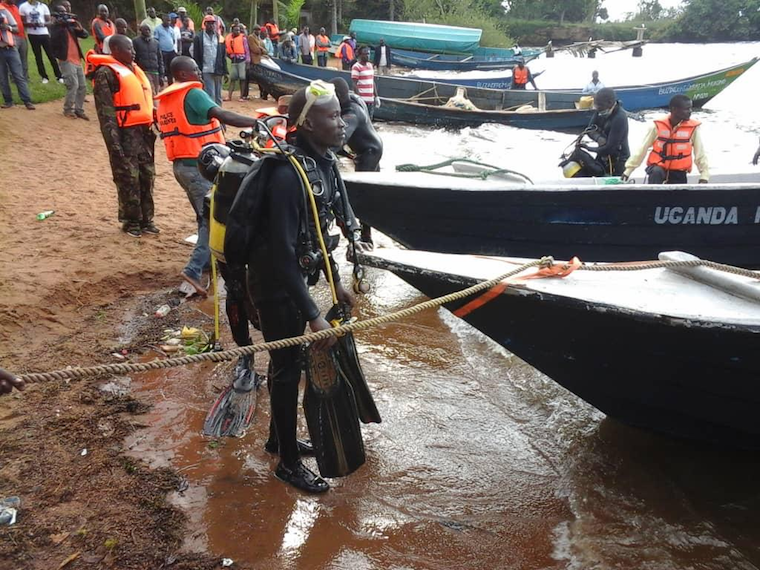 Survivors of Saturday night's boat accident on L.Victoria have indicated that many of their colleagues could hardly heed to signals of a looming tragedy because they were high intoxicated. The MV K Palm boat sank on its way to KK Palm beach in Mpatta sub-county, Mukono district, killing more than 30 people.

It is suspected that the boat was carrying more than 100 people by the time the tragedy occurred. But less than 60 are now accounted for, according to a police report. Only 27 people have been rescued alive and 32 bodies have so far been retrieved from the lake.

Survivor, Shamirah Nsereko, 32, a businesswoman in Kampala told URN that the boat started losing balance immediately after setting off, but the waves on the lake at the time, she said instead sent the intoxicated revelers into excitement. Many thought it was a normal occurrence, or a stunt by the captain to make the boat cruise enjoyable.

"We departed from KK beach. Originally the departure time was 12:00pm but for some reason we experienced delays and had to wait until 5:00pm. That's when we departed. Even then, the big boat could not come to the shores and we had to be taken to where it was using canoes," Nsereko said.

Nsereko said that several people on the boat were drunk and could not really figure out what was going on.

"When you're talking to people who are still drunk of course they can’t figure out that they are not balanced. So we kept on moving and we started realising that some water was coming inside the boat. We tried to balance the boat from beginning. As we approached somewhere in the middle, the waves grew stronger and we saw one of the speakers fall out into the water. That is when we realized that things were really bad and then we tried to create some balance. All of us went onside but one side had already capsized so we had no way out." she said.

She adds that the boat started capsizing, causing a stampede. Everyone on the boat was fighting for their lives, looking for the nearest exist which however, was not possible for many.

"There were some smart boys who were close to the border line of the boat, they stood on the top of boat and one of them realized he had his phone in his pocket. He pulled out his phone and started showing the flashlight to the shore. We were close to some beach called Mutima Country Haven so some people there realized there was something wrong. They started sending in a canoe and then we designed a pattern of holding unto each other until the got us from there." she added.

Nsereko added that the local rescue canoes from Mutima beach arrived after 10 minutes but could only save a few people, yet the one's left on board, did not have life jackets. Nsereko said that God's grace kept her alive.

The other survivors who have been rescued so far include, Francis Senkeezi, Farooq Muzimba, Andrew Luziba, Joseph Kirimenzi, Mark Sseremba, Freeman Kiyimba, prince David Wasajja, Brian Jjuuko, singer Iryn Namubiru, Iryna Namutebi, Justin Tashobya and one only identified as Twesigye, among others.

Musician Namubiru said the event was traumatizing. "By God's Grace I am still Alive, Safe, and getting medical attention but still so traumatized. My deepest thoughts to our comrades who didn't make it and condolences to the bereaved families. What can I say," Namubiru said in a Facebook post.

The other survivor Justin Tashobya was delivered to her home early today by police officers led by Mark Odongo from CID headquarters. Tashobya is the wife to Star Times director Aldrine Nsubuga.

"My wife was on the ill-fated boat with her sister last night. She's just been delivered home after a traumatic night where she looked death in the face as she swarm her way to safety along with her sister," Aldrine said moments ago.

Another survivor narrates that they were alerted of a possible danger by the amount of water in the boat which was midway through the journey.  However, she says that most of the people on the boat did not take serious warnings about water entering the boat since they were high on alcohol and shisha.

Adding: "The local fishermen who were passing by started shouting, telling us that our boat is about to sink. They told those who want to be take ashore, come and board our canoes. But people were not paying attention, I told Sandra, my friend and then some people said since we all don’t know where the water is coming from, it could be true that the water is going to sink. The fisherman had stationed their canoes near the exits of the ferry calling on people to board to safety." she added.

She said that those who heeded to warnings by the fishermen jumped into the waiting boat and only learnt about the accident after reaching the landing site.

Another survivor, Edward Kateregga, a resident of Namasuba, Kikajjo who was hired to serve drinks on the boat says that the boat had a faulty engine which kept on cutting out from the onset. He says that they complained about the boat's mechanical condition but the management reassured them that the boat was unsteady due to the heavy waves on the lake. The boat had just been repaired just hours before it was sent back into operation.

"Some of the crew said it was the waves that is why they were telling us to balance the boat right from the onset. In the middle of the lake, people started scampering  to one side of the boat after one of the speakers fell into the water, soon followed by the generator and then the engine went off as well." said Kateregga.

Kateregga says even for those few who had life jackets, they got trapped under the wreckage of the ship after it sank.

"Even if you had a life jacket, it was hard to swim to safety because we had been trapped underneath the wreckage. But even then, very few had life jackets. I had my lifejacket on and somehow found my way out of the wreckage and I was followed by a few others. We started screaming for help and the fishermen sent in canoes which were also overloaded by survivors. I jumped of the canoe because I realized it was also going to capsize and swam to the shores. That is how I survived." said Kateregga.

President Yoweri Museveni sent his condolences to the families who lost dear ones in the accident. Museveni said the operators of the boat "will obviously be charged with criminal negligence and manslaughter, if they have not already been punished for their mistake by dying in the accident."

The owner of the ferry, Templa Bissase or Bissaso and his wife are said to have both perished in the accident. Museveni said according to preliminary information from the security services, the sank boat was unregistered, unlicensed and most likely uninsured.

Museveni said he has been informed that boat only had capacity for just people yet it had about 150 passengers on board. He added that from now on government has ordered for the electronic registration of all boats so they can be monitored to know where they are going and why.

-1 #1 kabayekka 2018-11-25 22:12
This is a leader who seems to be misinformed. Running a marine business on this large African lake is not like running an African bush war in Luweero.
Report to administrator
+1 #2 kabayekka 2018-11-25 22:21
What of the MV Bukoba and many more licensed boats that have killed and punished those that have sailed on them as they sank in this Ancient Lake Nalubaale!

May the souls of the drowned be at peace.

But one of the biggest problem we have in this country/Africa is safety precaution. We are fundamentally fatalistic.

As a result, we easily get used to dangerous things.
Even those in the authorities to superintend PUBLIC SAFETY are dismissively negligent.

Most of the public road and water transport vehicles/boats are IMPROVISED contraption. E.g., in the 21st Century the govt still allows the use of canoes on our turbulent lakes.

In other words, the government should procure a professional Boat Building factory/company.
Report to administrator
0 #5 Apollo Ekelot 2018-11-26 11:11
Quoting Lakwena:

In other words, fire and water is finishing off Ugandans.

May the souls of the drowned be at peace.

But one of the biggest problem we have in this country/Africa is safety precaution. We are fundamentally fatalistic.

As a result, we easily get used to dangerous things.
Even those in the authorities to superintend PUBLIC SAFETY are dismissively negligent.

Most of the public road and water transport vehicles/boats are IMPROVISED contraption. E.g., in the 21st Century the govt still allows the use of canoes on our turbulent lakes.

In other words, the government should procure a professional Boat Building factory/company.

You forgot to mention the bullets!
Report to administrator
+2 #6 M 2018-11-27 12:23
My Condolence to those who Lost their dear ones in the boat accidents.
A mistake has occured, people have lost lives, we need a more stringent measures to avoid this in the near future.

The president is only sad and if his advise is not adequate , it should not be a point of redicule because he is not an expert in Marine issues.

I am glad he is concerned about this tragic accident and is more than willing to help avoid such tragedies in future. Lets stop making evering political
Report to administrator