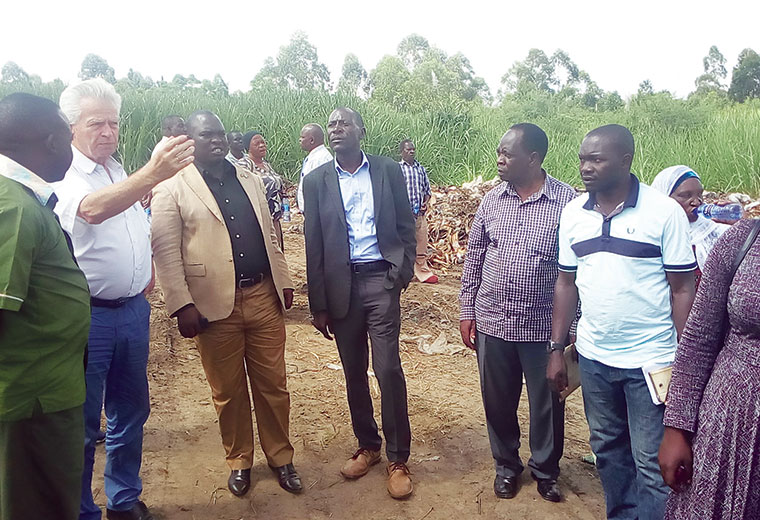 Iganga is an old town, dating back to the 1890s when the protectorate district administrators set up its headquarters at a place called Bukoyo. This is three kilometres from the present-day municipal council with the first Asian setting up a shop along present-day Balita Lane.

Located in eastern Uganda along the Trans African Highway, 120km from Kampala, Iganga has a population of 54,000 people. Like other urban centres, it is a bustling town; with many challenges as its activities vary from agriculture, commercial, education and medical services.

“Worth noting is that all the activities end up in waste generation which the council must handle so as to create a clean and healthy environment,” observes Iganga deputy mayor Enock Ngazula.

Solid waste generated daily is between nine and 12 tonnes, he says. And the waste is projected to hit between 45 and 60 tonnes per day once the council borders are expanded.

Currently, the solid waste is classified as 80% bio-degradable refuse, which is dumped in a temporary dumping site. But there has been growing discontent among residents on how authorities are handling the garbage.

The town’s leadership blames a lack of funding for the filth in the town. They point out how the only functioning refuse truck is not able to collect all the generated garbage. With Transform, working through its subsidiary firm, Biofertiliser Africa, the plan is to convert part of the garbage into briquettes for cooking and firing factories.

“We have invited Transform to help us address the problem of garbage in our town. The garbage will be converted into biofertlisers at their factory and the fertilisers supplied to the farmers to boost production,” the deputy mayor said.

“While we are removing garbage from the streets, we are also protecting the environment as this collected garbage is also to be converted into briquettes for use in homes, factories, schools and others,” he said.

Two experts from Denmark led by Prof Jorgen Logstrup and Henrik Christiansen, have been to Iganga to demonstrate how the new waste-to-value technology works. Prof Jorgen said the project will be at no cost to the municipal council as studies have indicated local authorities are grappling with garbage heaps due to lack of funds.

In appreciation, Iganga has provided land where the waste treatment plant will be located.

“The good thing about this project, it does not need a landfill as is the case with other garbage disposal facilities. The garbage is expected to be consumed as soon as it is delivered at the factory,” Transform country director, Abdul Dedya said.

According to Dedya, Transform is to inject $1.2 million as initial capital into Iganga waste management project expected to last 20 years.

“Our installed plant capacity is to produce 40 tonnes per week of bio-fertilisers and 15 tonnes of briquettes daily depending on the availability of the bio-waste,” Dedya said.

“Our market will be Iganga town, the immediate surrounding areas, those beyond and the regional market as demand for bio-fertilisers to boost agriculture and clean energy is there,” he added.

According to Eng. James Mawa, a bio-engineering expert, organic waste can be transformed into bio-fertiliser through composting which is a biological process. Organic substances in the waste are degraded using air.

“The compost has a controlling effect on plant fungal diseases on a number of plants which controls spread of diseases,” he observes.

The application of compost may reduce the need for spraying pesticides, Eng. Mawa says.

He said the other option is heat composting where organic waste is mixed with sludge and composted in an isolated bioreactor. At the correct mixing ratio of sludge and waste, the temperature will rise within 48 hours to 70 degrees centigrade when air is introduced mechanically.

In this way, the input materials are hygienic, dehydrated and stabilised. Under careful process monitoring, organic substances are degraded under release of water, carbon dioxide and nitrous compounds. All exhausts are purified in a biofilter.

After about five to seven days the end product is ready for application as fertiliser.

These traders could form a cooperative to turn that waste into re-usable energy. Why outsource our own problems to other people, the government?

They work and live there; they should take the initiative to clean and recycle the rubbish instead of waiting for a foreigner to tell them.
Report to administrator