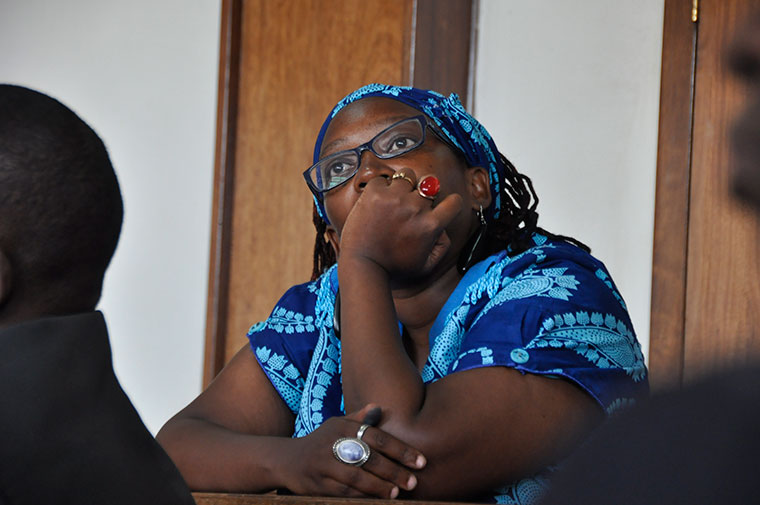 Makerere University research fellow Dr Stella Nyanzi has asked to be sent back to Luzira after turning down an opportunity to apply for bail. Nyanzi who pleaded not guilty to charges of cyber harassment and offensive communication, said she wasn't interested in applying for bail but instead wants to be taken back to Luzira prison, because she's on a mission to teach inmates how to use social media.

She was henceforth remanded until November 22 by magistrate Gladys Kamasanyu. Nyanzi was recently arrested at Wandegeya police station after posting a provocative birthday poem to President Yoweri Museveni on September 16, 2018, a day after Museveni's 74th birthday. The poem which was posted on Nyanzi's social media page was crafted in vulgarity seemingly targeted at the president's late mother Esteeri Kokundeka.

The prosecution alleges that on September 16, 2018…Nyanzi used a computer to post statements wishing that Museveni should have died at the time of his birth. Prosecution adds that Nyanzi, wilfully and repeatedly used electronic communication to post similar messages which disturbed the peace, quiet or right of privacy of President Museveni.

Nyanzi pleaded not guilty to the charges. However, she said that as a poetess, she used the metaphor to portray her criticism against the ruling National Resistance Movement government. She adds that she found it ridiculous that the president would be offended by a poem that made reference to his mother.

"I don't want to waste the court's time, I deny the charges. I want Museveni to come to court, face me into my eyes and tell me how my posts on Facebook have offended him," Nyanzi stated wondering how the wishes of a woman and a poetess posted on Facebook can be offensive to someone.

Nyanzi said she wants President Museveni to come to court and confess that he reads her poems and gets offended by them.

"I have written a lot about Mr Museveni and I don’t see what I faulted to say that his mother Esteri who is even a dead woman as we speak should killed him at birth looking at what he has done done to the Ugandans your worship. I speak for many people and I plead not guilty on this count.” Nyanzi added.

At the time, she was charged for calling the president 'a pair of buttocks' which prosecution stated that was an obscene or indecent suggestion. She was at the time remanded to Luzira prison for two weeks and later released on bail.

During this time, the High court Criminal Division sanctioned a request by the prosecution to conduct a mental health examination to ascertain her mental status. However, she rushed to the Constitutional court contesting the order on the ground that it was based on impugned sections of the 1938 Mental Treatment Act. Nyanzi has since obtained an injunction from High court blocking the mental examination.

Nyanzi rose to fame in 2016 after staging a nude protest at Makerere Institute of Social Research (MISR) following a controversy between her and Prof Mahmood Mamdani, the institute's director.

The State alleges that on September 16 and 19, 2018, Dr Nyanzi posted on her Facebook page suggestions deemed obscene against the President’s deceased mother Esteri Kokundeka.

Am interested in knowing who the complainant is and whether he will come to court to give evidence.

All those claims that Dr. Nyanzi repeatedly posted messages to disturb or attempted to disturb the peace, quiet or right to privacy of the President are non starters.,
Report to administrator
0 #22 Jama 2018-11-11 14:34
My friend Gwok,I myself have forgotten a lot about this story and I no longer remember his name.

Maybe someone else with further details can help us narrate the story.

All I know he was latter adapted by a kind family.

As of today i have no information about him anymore.
Report to administrator
+1 #23 Kirya 2018-11-12 02:30
A man who has killed many Ugandans stolen looted
rule by the power of the gun has the guts
to imprison a well educated professor.

My friend Gwok,I myself have forgotten a lot about this story and I no longer remember his name.

Maybe someone else with further details can help us narrate the story.

All I know he was latter adapted by a kind family.

As of today i have no information about him anymore.

. We are in agreement here;
(a) we agree that her defense differs from my suggested denial strategy. I also acknowledge her right to make that decision, which does not necessarily mean that it is the best strategy for her defense in this situation.

(b) On/for the Buganda issue, we also seem to agree. To that I add: That hatred MUST HAVE BEEN both ways between Obote and the Ganda masses, his wife excepted, & it seems to have REMAINED SO between the Ganda & Langi masses of TODAY, you included, I {a L-Kalenjin} excepted. [I have no supporting data for this personal opinion.]
Report to administrator
0 #26 Lakwena 2018-11-12 12:15
Quoting Wainanchi:

Pigs who have nice words for crazy Nyanzi, I say,If you like her Fu..K the bitch!!!

Wainanchi calm down. Calling Dr. Nyanzi or anybody else bitch does not make her one.

In other words, Wainanchi must be afraid because, when you see that Ugandans like Stella Nyanzi have already lost their fear of Mr. M7 (eyeballing) and going to prison; then it is time for sycophants like Wainanchi to cut and run very fast.
Report to administrator
0 #27 Wooden.K. 2018-11-12 13:37
Good afternoon Gwok !

eyalama noi noi for agreeing with me.

But , I want to correct you like this : we , the Baganda DO NOT hate the Langi masses . We love them like we love anybody no matter what their tribe is . One of my best friends who passed away was Langi.

Bugada is the only Nation with no record of tribal discrimination.

In Buganda , we only hate those who hate and want to destroy us. We are like Israel.

What we hate is OBOTE and OBOTEISM.

That is why I felt dizzy when Akot said that Obote & Amin respected the constitution and the power of the people.

It is an insult to the pigs to compare them to the past and present dictators . Pigs/ swines do not torture , murder or carry out massacres .
Report to administrator
0 #28 Wooden.K. 2018-11-12 13:46
On Nnyanzi , her strategy is phsychologically superb.

If the intention of jailing her was to humiliate and silence her , it is not working.

She is already ahead of her tormentors. She gladly asked to be taken back to Luzira because she is got some work to do there. Thats new !!!!

By taking her to court , Nasty Nnalongo has been given a platform that is even more effective than Social Media.
Report to administrator
123