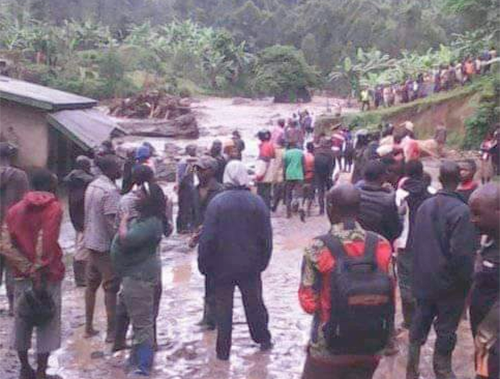 Over 40 bodies have been recovered so far after mudslides swept four sub counties in Bududa district according to local authorities. The sub counties include Bukalasi, Buwali, Nalwanga, and Bubiida.
Bududa LCV chairperson Wilson Watira fears that the number of the dead will increase as rescue and recovery efforts are intensified.

According to Martin Owor, the commissioner for disaster management in the Office of the Prime Minister, river Suume burst its banks in Bududa at about 2.30pm following a heavy rainfall and a landslide up the mountain.
It rolled big boulders through a village in Bukalasi sub county killing several people. 25 bodies including 4 children were recovered by last evening. About 400 people from the villages of Suume, Nyekhe, Malila, Lwanda, Nanyinza are believed to be missing

Over 200 pupils of Shiteteyi primary school are also missing after the mudslides swept part of their school located at Maludu trading centre. According to James Kiumi, a resident of Suume village, the heavy rains that started at 11a.m. lasted for four hours. The landslide hit the place at 2:30p.m.

Jonathan Musene, the LCI chairperson of Suume village says the mudslides have displaced more than 1,500 people. He also says all the roads have been cut off and bridges swept away by mudslides.

According to Owor, the OPM disaster team led by Brig Steven Oluka has been dispatched to join the district disaster rescue and recovery team. Relief supplies including blankets, tents, tarpaulins, jerrycan's, source-pans and food for the survivors have been dispatched.

Survivors talk of hearing the rumbling sound and tremors of flying rocks that swept everything that was in their path.

It's time believers in God go back to the Bible & understand what is happening was foretold: all we can do is try to survive by living in safer grounds!

This is why trees must be planted more & more, forests protected, wetlands maintained as they minimise the impact of floods!

This is why the entire world MUST wake up because every body is concerned with climate change!

Whether it's heatwave, flooding, typhoon...the destructions are the same & every coner of the earth is concerned!

The weather is good in Europe, yet every body is worried of what it will be next!

The author knows very well that there's no way you will ever found out the exact figure. It could even be higher. Talk about ejuuni Republic.
Report to administrator
0 #16 Fuller 2018-10-15 16:35
No wonder Uganda has been ruled under chains for 32 years.

The discussion here is focused on climate change! No one is looking into politics because it's expedient to drop here academic and writing credentials and call it a day. Sad but true!

Yes, climate change has chosen -- of all areas -- Bududa an area with rich soil and abundant minerals.

And when the natives are "persuaded" with little change in the pocket (how does 5m shillings sound, ah?) they -- most probably -- will agree to relocate.

Then rumors will start how suddenly government found this and that pricy commodity but the original owners of the land are not entitled to any compensation because they accepted 5m/ and 'abandoned the land'.

Until Uganda looks deeper into the sinister ways of the corrupt ruling class, one by one will be displaced.

Deep-thinkers and Forward-lookers keep eye on the ball: People Power.
Report to administrator
12