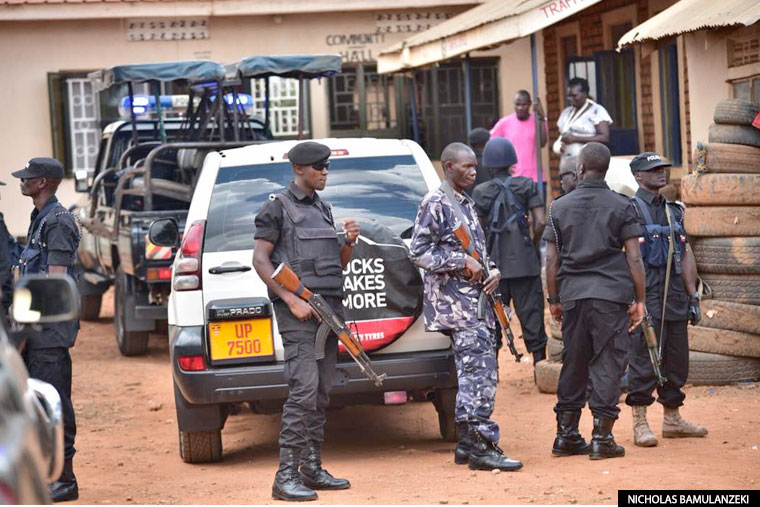 He was forced into a waiting police vehicle, registration number, UP 7500 and driven straight to Kasangati police station near his home in Magere.

Kyagulanyi also known as Bobi Wine, returned to the country today, Thursday after spending at least 19 days in the US receiving treatment following alleged torture at the hands of presidential guards, Special Forces Command (SFC).

Journalists were barred from accessing the airport and although police had yesterday announced that only his immediate family members would be allowed to receive him, Bobi Wine's brother Eddie Yawe and singing partner Nubian Lee who had gone to pick the legislator were arrested. According to city lawyer Nicholas Opiyo about two dozen artists were also arrested.

Since he announced his return date last week, security has been on high alert to foil any homecoming rallies or assemblies by his adoring supporters. Since yesterday, police and the army mounted several roadblocks on Entebbe road - searching each and every vehicle going towards the airport. Traffic on the Entebbe expressway was also completely blocked.

Today, on Entebbe and Gayaza road, people who had lined the road were indiscriminately beaten by security operatives. Even boda bodas bearing pro-Bobi Wine stickers were impounded and taken to Kasangati police station.

Dear Observer. Do not block me and freedom of expression to say what I think of Uganda, freedom and democracy.

But Wainanchi, calm down. Nobody is blocking you from expressing your dishonesty and foolhardiness.

Your terror regime is the one e.g., that yesterday turn Entebbe into a military garrison and stopped all media houses from going to Entebbe airport to report on the arrival of Hon Ssentamu Kyagulanyi.

One side of Kato Wainaichi , is here jumping up down cheering that the "swine" should not only be blocked but beaten a little bit more .

Another side of Nakato Mia Mia is here weeping like this ; I am chocking , please do not block; I have a lot of democracy to write about .

Your title that "Bob wine has been arrested" is not only inaccurate but also misleading. According to other reports the man was "received" by the Police and escorted him to Magere.

Perhaps it is the choice of English words (received for arrest) coupled with the fact that he was in a police vehicle, which makes your report to be inconsistent with factual reporting of the man's arrival.

In any case very few non-police people, in Uganda, who sit in police cars for a cup of tea. So you are excused for the misreporting.

Thank you The Observer for this open forum.
Report to administrator
+5 #35 Wainanchi 2018-09-22 02:40
.All barking dogs and their mentors are short of words and their lambasting against NRM government was countered.

Besides, just today we hear that THE COMMONEALTH SECRETARY THANK OUR MINISTER OF DEFENSE ON IMMENSE CONTRUBUTION AND ZECRIFICE OUR GALLLANT UPDF SOLDIERS GIVE IN DWFENCE OF FREEDOM AND LIBERTIES OF OUR AFRICAN BROTHERS AND SISTERS WHEREVER THEY ATE SENT AND NOW THAT THEY ARE DEFENDING THEIR BELOVED UGANDA AGAINST FOREIGN SPIES AMD MASTERS WITH THEIR ACCESSORIES OUR SOLDIERS ARE NOT GOOD!!

What is happening here ?

Can Uganda Government and its security allow to be destroyed and killed by paid terrorists and spies and also to allow foreigners to pay their dirty money to burn Kampala and kill out patriots in order to push forward their crony Bobi Wine & Co. who sold their souls to devils and mislead our youth?
Report to administrator
+5 #36 Wainanchi 2018-09-22 02:46
All barking dogs are silent now!

Thank you Observer to allow me to publish my views.

The mere fact that the same ugly people write from day to day and constantly attack president Museveni and NRM government shows their true colours.

They are true enemies of Uganda and they are offering only hate and killings.

Western propaganda first launched movie Queen of Katwe to prepare ground to rebel poor youth in poor areas of Kampala and other cities by anti Uganda and foreign sponsored Bobi Wine as " ghetto president".
Report to administrator
+5 #37 Wainanchi 2018-09-22 02:53
The idea behind is this.Start killings to show that Uganda is not stable and then mobilize and lure unemployed youth to propel crook and liar Bobi Wine.

Bobi Wine saw his window of opportunity to move against NRM government by using foreign money and lies.

I watched his interview at Al Jazeera few days ago.You could see from his expressions and words that he is born liar and thought in America how to lie and deceive.

His I'll political moves and actions outside political system in Uganda must be stopped censored and legally blocked.

Immagine if you ask people in any country to raise against the government start looting and killing? Should the government sit and watch or take punitive actions.? You bet!!!!
Report to administrator
-1 #38 Wooden K. 2018-09-22 12:15
Fellow Ugandans , lets all wag our tails and join our dear friend Wainachi to thank Observer for unchocking .

Even if we all agreed that foreigners and colonialist should not say anything , we still thankthat the
COMMONWEALTH SECRETARY for thanking us completely and also.

Maybe the COMMONWEALTH SECRETARY forgot to thank us for blocking Bobi Wine all the way to his home.

Fools will only wonder what all the PANIC is about

.All barking dogs and their mentors are short of words and their lambasting against NRM government was countered. ...

What is happening here ?

Can Uganda Government and its security allow to be destroyed and killed by paid terrorists and spies and also to allow foreigners to pay their dirty money to burn Kampala and kill out patriots in order to push forward their crony Bobi Wine & Co. who sold their souls to devils and mislead our youth?

Nakasero Wanainchi, you only have yourself to fool around blood sucker. E.g. who Killed Yasin Kawuma?

In other words, you people are directly from hell.
Report to administrator
1234