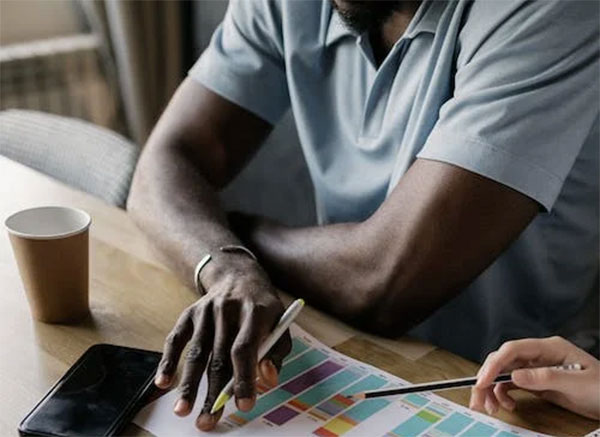 I believed he truly meant his apology, and I wanted to be able to forgive him; after all, what other choice did I really have? If I broke up with him, where would that leave Junior and me? I had no job and no money, other than what he gave me; he paid for the flat and every one of Junior’s needs and there was no way I would ever be able to afford that on my own, so I knew that I would ultimately have to find some way to get past what had happened.

Besides, after David had let slip that his wife was the real reason behind his attack, I was determined to not let her have the last laugh – she might have gotten David to beat me up, but I would not let her be the reason we broke up.

However, the sincerity of his apology did not alleviate the pain or damage his attack had caused, and while I might force myself to forgive him, even if just to continue to have Junior and my costs covered, I knew things could never truly be the same again.

It was time I started to think about developing a back-up plan to cater for my needs, for never again did I ever want to feel like I had to forgive or tolerate abuse just to have the bills paid.

I knew getting Julie to forgive me was going to be an uphill task, but I was admittedly surprised by her lack of enthusiasm for my car offer.

Any other woman would have been thrilled, but if anything, Julie actually appeared to be offended by it. It was, however, a pleasant surprise, for it re-affirmed one of the things I had always loved about her – which was that she was not in the least bit materialistic.

When one has accumulated as much as I have, they get accustomed to people around them always wanting a piece of their wealth, and it was refreshing that I had never sensed that from Julie. In the end, however, just like I knew she eventually would, she capitulated and accepted both my apology and the car offer.

Truth be told, I felt I had gotten off lightly; what I had done to her had been truly despicable, especially since she had been innocent of the image Diane had planted in my mind. In hindsight, I should have been a bit more wary of her story, and now knew that in her usual scheming way, she had set me up for what I had done to Julie, and held her largely responsible for my actions last night.

My first impulse was to go and give her a dose of what she had made me do to Julie, but I knew that would only make things worse; besides, hitting a woman, no matter whether she deserved it or not, was not something I intended to make a habit of doing.

Instead, I decided to be even more cunning than she had, and beat her at her own game; I would let her go on believing that I still believed her story and no longer wanted to have anything to do with Julie, and that way she would have no reason to suspect me of going to the apartment and would give up her surveillance of it, thereby giving me the space I needed to make up with Julie. And I had lots of making up to do.

There was something off about David, and I could not quite put my finger on what it was. He was being great with the children, playing with the girls, and even helping Daniel with his homework, but I sensed a distance and coldness when it came to me.

He insisted I was imagining it, and that there was nothing wrong, but I was not convinced, and after the children had gone to bed that night, I tried putting out a feeler for what – or rather who – I suspected it was.

“Have you seen that woman?” I asked conversationally, as we sat down for a night cap in the living room.
“Julie? What for? I saw her yesterday after you told me what was going on, and said all I had to say then; I don’t have anything else to say to her, and I don’t think she does either,” he answered dismissively.

I breathed a silent sigh of relief; it looked like Tracy was right after all. I had achieved my mission and it was time to let that go. Whatever was going on with David, at least it did not involve that wh*re anymore, and that was a huge weight off my shoulders, as after her, anything else was a walk in the park as far as I was concerned.

We made love that night, though I was the one that initiated it, and a more accurate description would actually be ‘had sex’, for there was none of the usual tenderness that accompanied lovemaking.

Instead, David was rough and impatient, giving me the feeling that he was using me as no more than a vessel to vent whatever it was that was frustrating him, and once he was done, I was sore and tender and regretted coming on to him in the first place.

I, nonetheless, still was not overly concerned; we all had ‘off days’, and this was hopefully just one of David’s. Since that wh*re was now out of our lives, I was positive that things would only get better from now on.