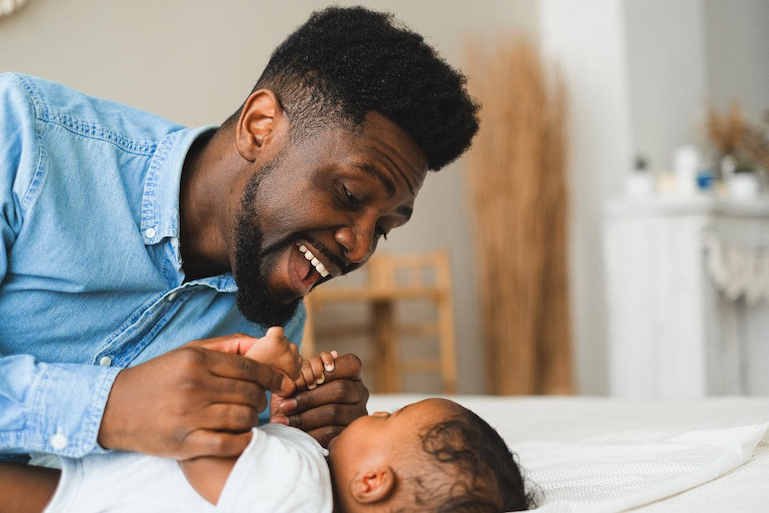 When I walked into the apartment, it took a few seconds for my mind to register what my eyes were seeing; Julie and Dr Kenneth sitting so close to each other on the couch that their bodies were literally touching.

The sight was so unexpected that I was momentarily stunned into inaction and just stared at them. But then Julie sprung to her feet like she had been stung, her eyes as wide as a deer’s caught in headlights, and her guilty reaction shook me out of my stupor.

Without another word, I marched off to the bedroom. I could not deal with Julie at the moment; all I wanted was to see my son and make sure he was alright and not being neglected while his mother cozied up with her doctor.

He was sleeping soundly in his cot, and I exhaled in relief before gently running my forefinger over his cheek; for a second all thoughts of Julie were out of my mind as I was flooded with love for my son.

I had not noticed Julie follow me until I heard her hesitant, nervous voice behind me: “It’s not what you think.”
Slowly, I turned from Junior.

“I didn’t say what I think,” I answered coldly.
“You didn’t have to; it’s obvious from the way you’re acting, but you’re wrong, there’s nothing going on between Kenneth and I.”

“So he’s now Kenneth, is he?”
“There’s nothing going on, David,” she repeated, her tone desperate.
I wanted to believe her, but I was not even sure of what I believed; I needed to clear my head.

“You need to get out of my way, Julie,” I repeated, my tone low and warning.

She must have seen something in my eyes, because she didn’t protest any further and instead quietly stepped aside. Without another word, I marched past her and out of the apartment, not so much as glancing at the doctor on my way out, and slamming the door as I left.

Although I had been far from thrilled at Kenneth showing up unannounced, the sight of him standing there with a box of pizza in his hands, looking so hopeful and eager to please, made it impossible for me to turn him away; so, I had invited him  in, and as the evening progressed, I was actually glad he was there.

At least I was not sitting by myself pining after David, and as it were, he turned out to be great company, even helping me get Junior ready for bed as we talked about a whole range of subjects, from our childhoods, to relationships, to careers.

I learned he came from a middle-class family, had been engaged to his childhood sweetheart, until she decided she preferred his best friend and that since then, he had been married to his job.

It was a little after nine when the front door suddenly opened, and David walked in, and I was caught so off-guard that for a few seconds I just stared at him, before it sunk in and I sprung to my feet. He broke the silence by demanding for Junior. Still in shock, I told him, and then as he strode off towards the bedroom, I panicked; what was he going to do?

Stories of fathers grabbing or harming their children to get at their mothers flashed through my mind, and I hurried after him, but then stopped short when I got to the bedroom door and saw him standing by Junior’s crib, gently stroking our son’s cheek, his expression tender with love.

Seeing him like that with our son melted my heart, and I forgot about how hurt and abandoned he had made me feel over the past few days. But then I remembered his expression when he had walked in and seen Kenneth; it had been a mixture of shock, hurt and rage, and suddenly all that mattered was convincing him that what he had seen, was not what he thought he had seen.

But when he turned to me, the love in his eyes from a second ago was gone, replaced by an icy glare that sent an apprehensive shiver down my spine.

I knew he had hit his wife before, but never had I feared he would ever raise a hand against me – until then. No matter how desperately I pleaded, he remained unmoved, and minutes later, he stormed out of the apartment.

As I helplessly watched him leave, the feelings of hurt and abandonment flooded back, compounded by a sense of guilt and punishment for a crime I had not even committed.

Once it had clicked just who David’s whore’s mystery man was, and I was able to put a name to the face, there was no reason for me to linger in the area any longer; so, starting up the car again, I rejoined the traffic and headed home.

As I drove, my entire being was literally buzzing with the excitement of what I had discovered, my mind racing as I tried to figure out what I was going to do next, and how I was going to share the information I now had with David.

However, once I got home, I had to force myself to push these thoughts aside, as I shifted to mum mode, supervising the children’s dinner and baths, eager to get through these schedules, so I could send them off to bed and go back to concentrating on formulating a plan of action regarding David, his whore, and her boyfriend.

I was not expecting David back till much later; so, I was surprised when he returned shortly after I had finally managed to get all three children into their beds.

“You’re back early; didn’t you have a good night with your friends?” I asked innocently when he walked in.
“Not particularly; I’m going up to shower,” he answered gruffly, clearly in a foul mood and not interested in talking about it.

“Sorry; should I warm your dinner while you shower?” I offered, unfazed by his cold response.
“No thanks, we had some mchomo at the pub; so, I’m not hungry. I’m actually pretty beat; so, I think I’ll just shower and call it a night,” he answered, already heading for the stairs.

On any other evening, I might have been offended by his cold distant attitude, but not tonight; if anything, it gave me the space I needed to continue formulating my plan.

Tonight I would give him his space to be grumpy about a bad night out with the boys, for in a few days’ time, he would be receiving information that would really give him something to be upset over.