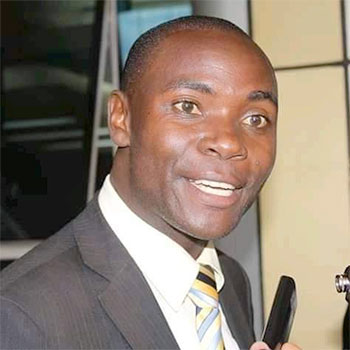 HASSAN MALE MABIRIIZ KIWANUKA is a maverick lawyer who wants to be remembered for fighting for rule of law in the country. The proud traditionalist and businessman, who fearlessly challenges everything and anyone in court, had a chat with Quick Talk.

Where do you pick the courage to file those many suits?

I think it is relentlessness... Whenever I feel like doing something, I must do it completely. When I say that we must fight for rule of law, we have to do it without mediocrity.

Actually, being a mediocre is worse than not trying. I filed my first court case in 2013 against defaulters in my moneylending business. Later, we sued our landlord and that’s how I entered into suing. Initially, I didn’t want to do so, but circumstances led me into suing.

For instance, when you are fighting a 35-year-old regime, breaking laws is the norm. So, do you want me to keep quiet and say I have filed enough suits or I should keep pushing until I get results?

You also sued the Kabaka of Buganda!

By suing the Kabaka, it was passionate on my side more than these political cases. That was a personal and family case. It goes back to my roots. When you antagonize my culture, I think I am man enough to object. We know the Kabaka is so great; yes, because of us.

Actually, I feel proud that I sued the Kabaka and somehow, when I sued, people became alert.

Was law your first calling or a trade to make money?

I don’t practice law and that tells you that I never intended to make money from it. When I was in S5, I wanted to do law but my father thought I could not make it. As a child, I just studied to go through the education system until university when I made a choice.

Fortunately, I got 25 points and got government sponsorship at Makerere University to study law. I wanted to be a serious lawyer but things changed around second year when I started a money-lending business.

A moneylender and student....

Throughout law school, I was a businessman. By fourth year, my company MK Creditors Limited, which started from my room 161A in Nsibirwa hall had expanded. I was lending up to Shs 100,000. Students would bring their phones as security, keep them in my room, and call me when they wanted to pay.

Quick Talk heard that you had a roommate but that business pushed him out. [It is said, Mabiriizi would use some charms to scare would-be thieves from stealing his money or property..]

No no no.... They lied to you. [Bursts into laughter]. That was fake propaganda around campus. Maybe, students thought so because I am a very traditional man. I had four roommates in first year but I shifted to a single room in second year until I completed my law degree.

How is the business?

It is moving on well, but this limelight affects it a lot. This business pays better than legal practice.

Why don’t you join LDC and become an advocate?

I don’t regret taking decisions. Why should I go to LDC when I don’t want to practice law! My battle for rule of law involves fighting judges and everybody. So, as an advocate, I will be regulated by their rules including suspension from the profession.

I don’t want to be a merchant of law because clients will fear to come to me. Today I am suing the Kabaka, then Museveni, judges, etc.

People consider you a controversial person...

That’s not a problem. The essence of studying law is to understand where controversies come from and resolve them.

Since 2013, how many suits have you filed and won?

I deliberately don’t count my cases because it is irrelevant and misleading. When you start counting cases, you will get misled from pertinent issues and start looking at numbers.

How far with the age limit trek to Arusha?

We have been moving but the fundraising is not forthcoming. We needed Shs 300m, but raised about Shs 30m since 2019.

When the constitution was violently amended, I was the first to file against that decision. There was no civil society organization that joined us in Mbale and it’s laughable.

NUP diehards look at you as antagonistic to their leader...

What’s wrong with being [so]? Democracy and rule of law survive on antagonism. Even in shrines, churches and mosques, people ask questions. You can’t be in society where you are not questioned. If I point out that their leader fraudulently joined Makerere, I don’t mind if they think I am antagonistic.

How did you feel when the DPP took over that same case in which you challenged Robert Kyagulanyi Ssentamu’s academic credentials?

The main point here is that we have to wake them [DPP] up because for more than 21 years, they have failed to investigate that case. They took over the case by force but they keep going [in] circles.

At any one time, Kyagulanyi must be accountable. We struggled to join Makerere with sleepless nights and someone wants to join the same free of charge. We can’t let things go like that.

Are you in any relationship?

I am not yet married; a single man without children. I am 34 years old and not in a rush to get someone.

But who is your ideal woman?

[Laughs] Getting a woman is something subjective. I need to first look at the wimena and see if she has my qualities. But of course, she must be educated.

Are you friends with lawyer Isaac Ssemakadde?

I won't say friend, but he's a comrade in the struggle for rule of law.

Justice Musa Ssekaana said you are an annoying litigant and vowed to send you to prison one day...

The last time I met him, he said I was submitting rubbish and I can’t imagine a judge speaking like that. I have had skirmishes with judges but they don’t reach to that level of quarrelling.

So, I don’t feel safe being before Ssekaana, because he may, onetime, misuse his power and arrest me.

In Uganda, none matches my principles. For our MPs, most of them practice double standards and stand for those positions to get money. Elsewhere, I think Nelson Mandela tried to match my standards.

Growing up, I liked Herman Basudde and I am still struggling to find his replacement. By the way, I prefer drama to music. My best drama actor is Charles James Ssenkubuge.

Uhmmmm, I like sleeping a lot and then, if I have a woman, I spend free time with her. I am also a traditional man and I like visiting people.

You said you were single?

Does that mean that I don't get women? I just don't have an official one for marriage. Do you expect me at this age to be a virgin? It is impossible [laughs]

No. I think it’s cumbersome. But I cook greens, wash, and iron my clothes.

What car are you driving?

Do I need to drive? I have a car but I don’t drive it unless I am moving long distances [yes, Quick Talk has seen the pump prices too...]. I don’t think its model is relevant, because I am not a socialite.

Your family and education background, please.

I was born on January 2, 1987 at Lugazi. My parents are both deceased; my mother Mastulah Ndwaddewazibwa died in 1992 and dad Muhammad Mutumba died in 2021. When my mum died, I relocated to my grandmother’s home in Nkokonjeru where I joined Lugazi Community PS for nursery and Nkokonjeru Muslim PS where I completed primary in 1999.

I got aggregate 21 to join St Peter’s SS, Nkokonjeru for S1. My father later picked me to stay at his home in Nateete, thus completing S4 at Crane High School, Nateete in 2004.

I got aggregate eight in six subjects and joined Kawempe Muslim SS where I finished A-level in 2006. With 25 points, I was admitted on government sponsorship to study Law at Makerere in 2007, graduating in 2012.

Do you plan to go for further studies?

No. I am highly educated and that degree is enough. I just need to engage in business and plan for the future.

What book are you currently reading?

I don’t like reading books written by whites. I prefer our indigenous literature. My latest is Kiyita Waggulu by Cranmer Kalinda.