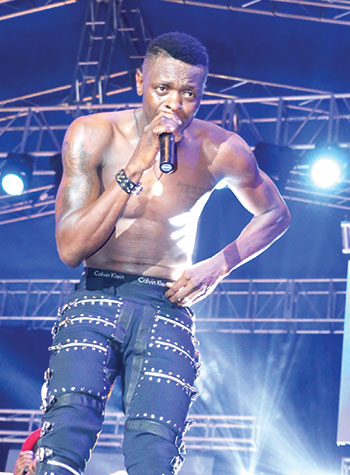 For some time, different stakeholders in the entertainment and arts industry have been meeting General Salim Saleh in an effort to find a way out of gripping poverty induced by Covid-19, which has left their activities under lockdown for one and half years.

The industry recently came under criticism when a ‘begging’ list from Uganda Musicians Superstars Association (UMSA) led by Chameleone leaked on social media, asking Saleh for Shs 9.4bn to be shared among themselves, in a country where stimulus packages remain shady business, and health workers work in spite of unpaid dues.

According to industry critic Eddie Ssendi, the main issue for the artistes right now is poverty and that is why they are running to Saleh for a bailout.

“None of the artistes who go there talks about the fundamentals of the arts industry like putting in place the copyright law. They all go there definitely to get money and he has the ability to sort them out,” Ssendi told The Observer in an interview.

He agrees that the artistes have failed to use the chance of accessing such a high- profile person in government to ask for long-term solutions to their problems but have chosen to think about what can satisfy them in the moment.

There has also been the formation of new associations such as UMSA, on top of the already existing Uganda Musicians Association (UMA) led by Cindy Sanyu. The comedians are also just as fragmented. Ssendi says all these are meant to quicken the process of the artistes soliciting for money from the general.

“All artistes associations created in the last three years have been created as a gateway to get some money from the government, but they are doing very little to address the problems affecting the industry and it is only a matter of time for them to prove whether they can stand the test of time,” he said.

Ssendi further noted the main problems these artistes ought to address include the demanding of the creation of a fully-fledged Arts Department in a government ministry, establishment of an active National Arts Council which is currently only in books, and empowering and educating all government agencies about the importance of the copyright law.

At a time like this when live shows, concerts and bars are still not allowed to operate, if Uganda had a functional copyright law, artistes would not be desperate for cash now, since their earlier works would still be supporting them.

“Our artistes can earn handsomely from their work through royalties. For example, very many places play music without paying the artistes. I wish they could concentrate on these three issues because those are long-term.  They don’t even need to unite into associations to get these issues worked upon,” Ssendi said.

Media personality Isaac Katende alias Kasuku also agrees that whereas General Saleh has the desire and will to help, he has failed to find the right approach to do so because he has concentrated so much on helping individuals while leaving out a bigger section of the industry.

“If he wants to organize the industry, he has to bring on board every stakeholder in the industry, and not just randomly meet up with certain artistes because what all these artistes are after is money and they know he has it. If he really wanted fundamental change, he would have told them at the beginning that he was not going to dish out money,” he said.

Operation Wealth Creation has since come out to distance itself from the ‘begging’ lists in circulation, although for the artistes in question, Gulu has been their Mecca in the last few months.

Katende says one of the main issues the artistes should address is the copyright law because with it in place, they can be able to earn from their craft even after years when they are no longer actively performing, instead of waiting to be bailed out with cash handouts from government.

The Uganda Performing Right Society (UPRS) has been in existence for more than 35 years, mandated to collect royalties on behalf of the creative arts, but it has met fierce opposition from the artistes themselves.

Kasuku, however, notes that even though the use of this money being given to artistes is not clear, they need it to solve their personal problems especially during these times when they have spent over a year without performing.

“The public gets alarmed when they see the amount of money these artistes are walking away with, because at the end of the day, they are not the only ones who have been greatly affected by the pandemic. There are other people who are doing worse.”

He also believes the new associations are being formed to fast-track cash deals with the general, and out of fear of being left out in the process.

For example, a group of little-known comedians formed their own association and went to Saleh without the knowledge of the bigger names in comedy. They received a few hundred millions for their Sacco, to the chagrin of the ‘comedy stars’, who challenged the smaller group’s actions on an NBS entertainment show.

During a television interview recently, Bebe Cool, one of the artistes who went to Gulu to meet Saleh, justified their meeting, saying that the musicians only go to Gulu to discuss strategies on how to take the industry forward.

“OWC was put in place to rejuvenate the economic situation of Ugandans and it is only within the rights of artistes to also go do the same and try to work out the challenges we are facing in these times of Covid-19. Many people are coming out and making this whole thing political and that we are just going there for cash hand-outs, but whatever will come out of Gulu one day, the nation will witness the biggest change ever in the entertainment industry. That I can [stake] my hand and it is soon coming,” Bebe Cool said.

Interestingly, Bebe Cool was once the artistes’ broker in State House, where the cash handouts would come from President Museveni himself. But after that slot being assertively filled by promoter Balaam Barugahara now, Bebe has joined fellow artistes to beg elsewhere.

About musicians forming different associations every now and then instead of uniting under one body, Bebe Cool said this was necessary because the problems faced by established artistes are different from those faced by upcoming artistes.

They have separated into two different groups so that they can be managed depending on their problems. However, Cindy, who heads UMA, is an established artiste and indeed appeared on Chameleone’s list of superstars demanding a bailout.

He added that this is not aimed at dividing artistes but, rather, aimed at encouraging upcoming artistes to work harder so that they can also join the table of the bigwigs in the entertainment industry.

Well, the jury is still out on whether the so-called bigwigs are indeed the industry’s superstars still. Operations director at Operation Wealth Creation, fashion designer Sylvia Owori denied allegations of giving out cash to individual artistes who meet with Saleh in Gulu, saying that the only expenses they incur with them are accommodation and food.

“We don’t give out money to any artiste. We only facilitate them for their hotel rooms and food when they come here. Even the list of musicians and the money they reportedly received from us, which have been making rounds on social media are totally fake,” she said.

Owori told The Observer that they have been doing trainings with the artistes mainly about understanding the way government works and those who have completed the trainings have only been awarded with certificates of attendance.

“Operation Wealth Creation in response to the crisis being faced by the country, as it has being doing with other sectors of the economy, has intervened by carrying out and providing mindset change educational trainings and workshops designed to empower artistes, build capacity and equip them with requisite skills they need to overcome problems which can hinder them from earning a living in future,” she said.

Owori further noted that OWC recognizes the potential of the sector for sustainable development and poverty alleviation and that is why it has taken the initiative to organize and mainstream the industry in order to fully tap its potential for national development.

“During such engagements with the creative industry which include music artistes, alternative ways for them to earn a living and also capitalize on their talents and large fan bases are shared, discussed and demonstrated,” she said.

Major Kiconco Tabaro, the public relations officer at OWC, said in a statement that any reports that they have given out funds to individual musicians or any person in the entertainment industry are false and diversionary.

“We have not released any money as OWC and if we are to carry out operations requiring resource mobilization and disbursement, we do so within a very clearly defined process and protocol as spelt out in the Public Finance Management Act,” Tabaro said.

Tabaro added that most artistes in Uganda belong to the informal sector, which lives from hand to mouth on daily incomes they earn from their activities and, therefore, as an institution, they saw it appropriate to help the entertainers deal with the crisis Uganda is facing.

Whenever I see these energetic young men and women.....read musicians lining up for dole from a retired General, I wanna puke.