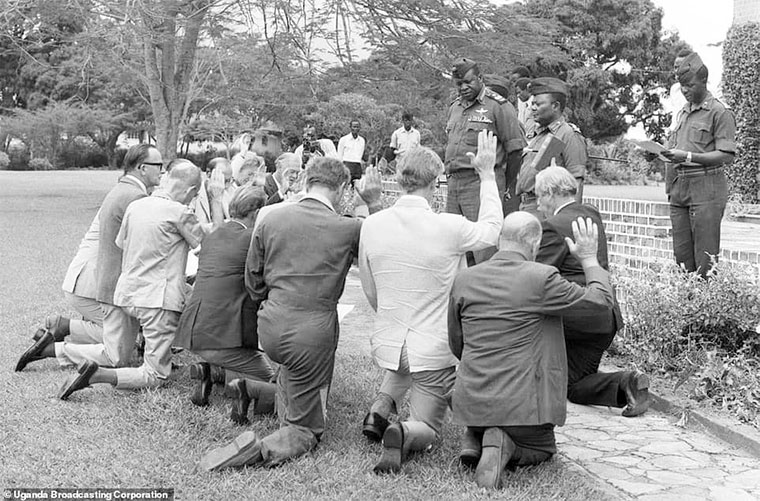 Muwonge Charles William Magembe, a researcher and columnist, has published a book titled, “President Idi Amin: A Narrative of His Rule (1971-1979).”

The 164-page book gives a captivating tale of how Amin joined the military, earned the military promotions up to the rank of major general, and his seizure of state power on January 25, 1971. The book also narrates the happenings during his eight-year rule. It ends by revealing circumstances that surrounded Amin’s death and burial in exile in Saudi Arabia.

Here, we reproduce a section in Muwonge’s book that narrates how the Defence Council declared Gen Amin as ‘Life President of the Republic of Uganda.’

After soldiers loyal to Maj Gen Amin toppled Dr Milton Obote’s government on January 25, 1971, a junior officer at the rank of Warrant Officer Class One (WOI), Sam Aswa, announced on Radio Uganda, the 18 reasons which motivated the military to overthrow a civilian government.

Later on July 20, 1972, President Amin promoted Aswa to the rank of captain. Also promoted on the same day was Maj Emilio Mondo to lieutenant colonel. Barely two months after the president proclaimed those promotions, Ugandan exiles based in the neighbouring Tanzania attacked Uganda through Mutukula and Mbarara, on September 18.

The unit, which invaded through Mutukula, was loyal to former president, Dr Obote. On the other hand, the invaders that used Mbarara axis were loyal to Yoweri Museveni, leader of FRONASA.

President Amin’s forces decisively repulsed the invaders. In fact, Alex Ojera, one of the top leaders of the invaders, was arrested and later murdered. He was the chief administrator of the rebels’ training camp in Mukuyu, Tanzania. He had served as the minister of Information and Broadcasting in the previous government of Dr Obote.

In the aftermath of the invasion, President Amin’s government beefed up security along the Uganda-Tanzania border. Its officials also carried out sensitisation seminars for the locals living in border areas in western and southern Uganda.

In January 1973, for example, Lt Col Ali Fadhul, the commanding officer of Simba battalion, conducted a seminar at Kamukuzi, Mbarara. Zakaria Mungonya and Paulo Ngorogoza led the delegations of the local chiefs from Ankole and Kigezi that attended it.

They submitted to Lt Col Fadhul a memorandum urging the Defence Council to declare President Amin, Life President of Uganda. The architects of the memorandum, Mungonya and Ngorogoza, were eminent persons in Ankole and Kigezi and in Uganda in general.

Mungonya, for example, had served as the Enganzi (prime minister) of Ankole native government from 1948 to 1953. In 1955, he became the first African Ugandan to serve as a minister in the Protectorate Government. He headed the ministry of Lands and Mineral Development.

The Ankole and Kigezi chiefs listed the following reasons to justify why President Amin had to rule for life.

(i) Since the military takeover (in 1971), President Amin abolished political parties which had divided the people of Uganda.

(ii) The kondo (theft) menace and the general service were abolished.

(i) The Asians who were ‘milking’ the economy of Uganda were sent to their home countries.

(ii) The Israelis who were subversive elements were also kicked out.

(iii) President Amin abolished mini-fashions, which were a disgrace to our culture.

(v) He brought back the body of Sir Edward Mutesa II.

(vi) He handed over the economy into the hands of the Ugandans.

(vii) He reduced the excessive alcohol consumption by reducing the time for bars and nightclubs.

(viii) He bonded students who, after completing their degrees, run away to look for employment in companies without first working for the government.

(ix) He has made Uganda friendly to many countries because of his good leadership.

(x) He has fought corruption, which existed among civil servants.

(xi) He has united the people of Uganda who are now living as one family.

The elders of Lamogi in Acholi also raised the demand for life presidency in March 1973. They handed their memorandum to the then acting district commissioner, Katumba Lujja, at Pabo sub-county headquarters.

Acting county chief for Kilak, Okello Kagojok, the military base commander, Capt Emadit, acting administrative secretary, Abdul Ramadan and the officer in charge of police, Odyek, were also present at the function.

“We have keenly been watching with great interest and appreciation the great work that this illustrious son of Africa, Field Marshal, Al Hajji Idi Amin Dada, VC, DSO, MC, President of the Republic of Uganda, Commander-in-Chief of Uganda Armed Forces and current Chairman of the Organisation of African Unity, has been doing, not only for Uganda and Africa, but also for the peace-loving peoples of the world.”

Since he came to power in January 1971, this vanguard and bulldozer of Africa has achieved success in the following goals:

(i) He has won the economic war and handed the economy into the hands of true sons and daughters of Uganda.

(ii) He has united Uganda into one family.

(iii) He has put Uganda on the map of the world.

(iv) He has struck a decisive blow to Zionism, imperialism, colonialism, neo-colonialism, tribalism, and racism.

(v) He has successfully hosted the 12th Organisation of African Unity summit in Kampala to the defiance of all the prophets of imperialism, Zionism, colonialism and their underdogs.

(vi) He has not only rejected dialogue with racist South Africa, but he is the only African leader that has promised a military confrontation with the Ian Smith and John Vorster regimes. In this field, we do not doubt his ability to succeed.

Because of the reasons we have shown above, we suggest that His Excellency should and must be declared ‘Life President of this Republic.’ This honour is long overdue and we, therefore, ask the entire ten million people of Uganda to support our suggestion.

On June 25, 1976, the Defence Council pronounced President Amin, Life President of the Republic of Uganda. Its statement claimed the decision was endorsed at the Defence Council meeting at Republic House, on June 22, 1976. The Minister of Defence, Maj Gen Mustafa Adrisi, who was doubling as the Chief of Staff for the Armed Forces, chaired the said meeting.

The statement further stated that upon reaching that understanding, members of the Defence Council instructed the then Acting Commander of the Air Force, Lt Col Godwin Sule, to read out their resolution to President Amin whom he met at his command post in Kololo, Kampala.

Below is the Defence Council statement:

“The Defence Council at their meeting held at the Republic House, on June 22, 1976, unreservedly suggested and unanimously recommended His Excellency the President, Al Hajji Field Marshal Dr Idi Amin Dada, VC, DSO, MC, should become a life president for the following reasons:-

(a) For having dedicated his life for the nation.

(b) He has done more for Uganda since Independence than any ruler.

(a) With immediate effect, His Excellency’s security arrangements must be reviewed and the security escort be strengthened.

(b) His Excellency the President delegates his ministers and military commanders to perform some of the minor functions and receive some VIPs instead of doing all the work himself.

(c) The Defence Council’s decision to make His Excellency Life President should be made public through news media as soon as possible.

(d) It was expressed that sooner or later, all government ministers might have to be military men, as civilian ministers appear to be playing a double game with military government.”

The book is on sale at Uganda Bookshop, Kampala; Bookpoint, Village Mall in Bugolobi and Christ the King Church bookshop in Kampala. It costs Shs 100,000.

Today The Rwanda Nationals He loved Most to even include them in our Police and Intelligence are Busy Killing us with Impunity!

Their Demigod called Kisiraani and Enemy of Humanity Enjoyed all Luxury during his tenure but Vowed to Crash Ugandans until they get Tired of Dying!!..So far Millions have lost their Lives, Land and Property!

Uganda has become a Failed State Where Police indulge in Organized Crime to Kill, Extort, and Exile Folks after Stealing all their Merchandise! Ugandans have to decide Whether to look on being Killed or Stand Up and Defend Themselves
Report to administrator
+1 #2 kambarage 2021-04-12 00:22
Quoting Kalibbala:

I do not need reading the 164 Page manuscript called Book ! I was Alive and Saw it All! Al Hajji was the Best President Uganda has ever had!!

Really? If you are craving for Amin, you are no different from an ignorant goat that licks the blade of a butcher's machete.

M7 is soft on dissent that even the dissenters themselves find difficulty explaining themselves. People insult him on TV 'just for public show' and get away with it.

He only arrests confused confusers dangerous to themselves and the country and releases them after key information is obtained. He gives people another chance. If NUP had met Amin who they crave, haa...you can guess what it would be like.

Leave alone M7 who you insult on radio, demonstrate against and go back home with no problem. Those few who have gotten wounded in demos do so under unavoidable circumstances. But Amin..? Hmm some comparisons are just for laughs.
Report to administrator