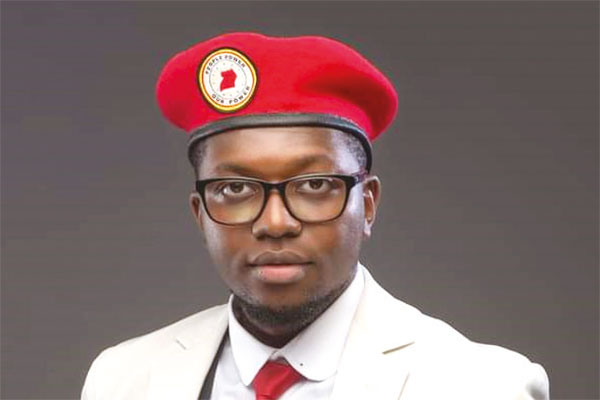 DERRICK NYEKO, 28, is the new MP for Makindye East. One of the youngest legislators in the in-coming 11th parliament, Nyeko swept into the august house on a National Unity Platform (NUP) ticket, dispelling assumptions that Buganda voted only ethnic Baganda in the just-concluded election. Quick Talk caught up with him recently.

Who is Derrick Nyeko?

I’m a child of Market zone, Wabigalo in Makindye East constituency. I was born in 1992 at Nsambya hospital. By the way, Wabigalo is one of the largest slums in Kampala. I went to Wabigalo and Ebenezer primary schools. For O-level, I went to St Peter’s Nsambya and for A-level, I went to St Mary’s College Lugazi. I then joined Kampala Film School for a diploma in filming. I’m a film director.

Who are your parents?

My father is Paineto Ofumbi and my mother is Florence Ofumbi, both still living in Wabigalo. We are six children; four boys and two girls. We are Japadholas.

So, do you speak Jap?

I did not get the opportunity to grow up in the village. In the city where I’ve lived all my life, we speak English at home and in the community we speak Luganda.

So technically, you are a Muganda…

I’m a Muganda and I love the Kabaka so much. I’ve been in Buganda Youth leadership positions, I love the culture; so yes, I’m a Muganda because Buganda is for all of us who live here. I appreciate the opportunities that have been given to us including positions of leadership.

Tell me about your political journey…

I have been a student leader throughout my education. In 2011, I contested for the position of secretary of student affairs in the Uganda Youth Council for market zone.

Did you say NRM?

Before the rise of Robert Kyagulanyi Ssentamu in 2017, we had already started looking for options. We had come into contact with the failed system. The president had bragged about pouring water into the KCCA forgetting that there were also NRM members whose aim was to serve the people.

He thought he was frustrating the opposition, but instead created more frustrated people including on his side. I didn’t see the opposition as an alternative, that’s why in council, I shifted my seat from the right-hand side of the speaker where the NRM sits to the middle because I couldn’t join the opposition.

There were many opposition councillors who I knew were working for different security organs; so, I felt uncomfortable to join them.

And then Kyagulanyi came…

When he came, we saw an opportunity of a young person we would connect with and was bringing a fresh touch to the politics of Uganda. He brought in the new slogan of People Power, which we also bought as NRM People Power. When the age limit bill came in, we opposed it vigorously.

We thought it was wrong for someone to stay in power for more than 35 years. That’s how we finally joined Kyagulanyi as NRM People Power. We started as Kampala but many other young people from across the country joined.

The reaction of the state and the party was harsh; they imprisoned many of us, they called us hooligans and they denied us ever belonging to NRM. That’s how I finally joined Kyagulanyi.

There were many people competing to be NUP flagbearers; some of them more experienced than you like Michael Mabikke!

When I joined People Power, I didn’t come alone, I joined with so many other young people from the NRM. I was given an obligation to be the coordinator for Kampala, Mukono and Wakiso, which I delivered perfectly well.

Kyagulanyi used to say that they were going to see people according to their deeds, not words. So, it’s from that perspective that they chose me, because I can deliver.

I was surprised you defeated the incumbent, Ibrahim Kasozi though…

People think you can’t defeat someone who claims to have Shs 4 billion on his account or another who thinks they have been here for so long. As a young person, I had to give reasons to people why they have to vote for me, in spite of my not having money.

We didn’t have money to even print posters; the few we printed were pulled down. People thought that because we didn’t have visibility, we would not make it.

What kind of MP do you want to be?

I would want to do things differently but the system for now, can’t allow us to say the things that are affecting our people.

You are really young, meanwhile.

Do you have a car?

I have a car but as I speak now, it is at Ggaba police station because as you know this has not been an election, it has been war. I was arrested two days to elections while I was giving our councilors posters in Ggaba. The DPC Kabalagala never wanted me to be anywhere.

He arrested me very many times even for doing nothing.

I’m not extravagant… I look at giving back to the community, having an ambulance. I have been bred and looked after by mothers in the markets; so, don’t expect me to drive a huge car.

In June you are going to start earning an eight-figure salary; won’t that overwhelm you?

It is beyond money… we have been with colleagues who have been shot dead during this struggle, no amount of money can pay for their lives. Secondly, so many people look at their MPs as the solution to their daily challenges.

We are not going to parliament to collect money but, rather, to improve the lives of our people. We are going to give a voice to those comrades that have died in this struggle.

Have you had a formal job away from being a councillor?

I’m a film director; I have worked with Kim XP for a very long time. I have also run my own company called the Empire Films.

And are you married?

No, I have a girlfriend; we have been in a relationship for more than five years.

What are you waiting for, man?

We have been in the struggle that would not enable us get time for that. But she’s also in school; I don’t want to distract her. She is doing her PhD; so, I decided to first let her accomplish it. [He declines to say her name, because “the politics we are engaged in, it’s better to keep your family away from it”.]

What was her reaction when she heard you had won?

She was happy, but she usually tells me the risk is too much. One moment that really touched her is when my mother came to see me at Kabalagala police where I had been detained, and she was also detained for about five hours.

Her only crime was to come and check on her son. My girlfriend also reached a point when she didn’t want to come to police anymore, because they would humiliate her.

Do you hang out?

Yes, I do, with a couple of friends. We normally go out and swim.

Will you still go to the same places as an honorable member of parliament?

We are commoners… where I go to eat food, some people will find it humiliating but these are the people who have given us the votes because we have been part of them. There is no way I’m going to change, because I’m now an MP. We are People Power, we must practice what we preach.

No; I’m a born-again Christian. I also want to keep sober all the time. I don’t want anything to distract my tomorrow.

I do posho, beans, rice; I eat everything...