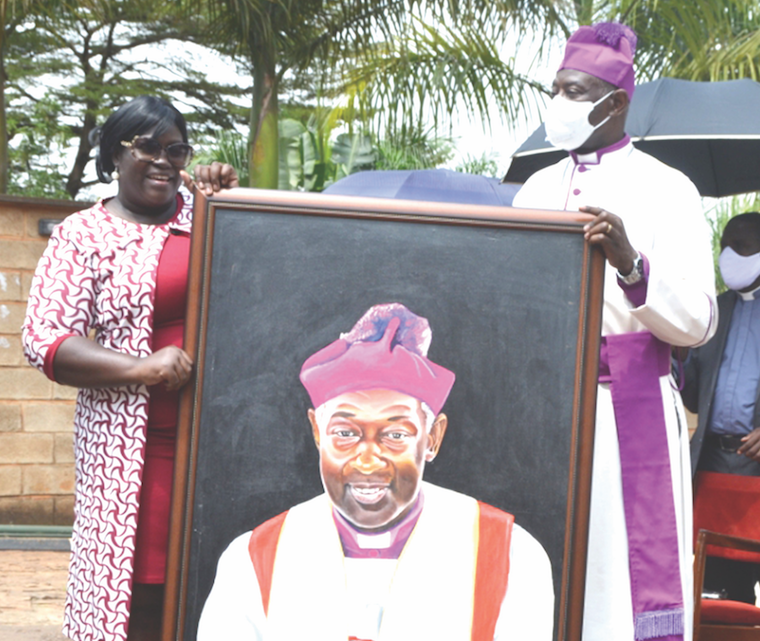 When you meet Ritah Namayanja Kivumbi at her art gallery, Magezi Arts Exhibition Centre at Namirembe Guesthouse, she does not strike you as totally blind. Her eyes look like those of a person with perfect eyesight.

Beautiful art pieces are on display outside and there is more inside the medium-sized room with not just paintings, but also jewellery made out of African materials, woven crafts including bags, baskets, photo albums, as well as sculptures, ceramics and textile designs.

After the introductions, she asks her daughter who accompanied her from her Bweyogerere home for her dark shades to cover her eyes.

“I know my eyes may look normal to an ordinary person. I need to cover them with these shades and protect them from too much light during day,” Kivumbi says.

Her beautiful artwork that includes portraits of Kabaka Ronald Muwenda Mutebi II, King Oyo of Tooro, Archbishop Cyprian Kizito Lwanga, Archbishop Stephen Kaziimba Mugalu, among others, leave one wondering how a woman with zero vision pulls it all off.

Kivumbi says that even though God gifted her with the talent of art, life has been full of trials and tribulations ever since she went blind 12 years ago.

“When I suddenly lost my sight in 2008 and lost all hope of regaining it, I began contemplating on how life was going to be like since I depended on art for a living. I even thought about committing suicide but found solace in my creative work and began on the journey to recovery,” she says.

Kivumbi, 40, who prefers to be called Ritah Wise re-opened her art gallery thanks to Shs 3m she got from the principal of the school her children used to attend; and in 2015, she resumed work but this time round she as visually impaired.

“One of the major problems I faced was movement. Hiring a car from Bweyogerere up to here costs Shs 50,000, which is really expensive especially when there is need for me to be at the gallery for most days of the week,” she says. The situation is made worse when her older daughter is at school, because she has to incur extra costs of paying a guide.

“There are times when I am left with no choice but to use a boda boda. Also transporting the art pieces to exhibition centres requires more convenient means, which comes at a cost,” Kivumbi adds.

In order to make a nice art piece, Kivumbi needs an interpreter knowledgeable about art, who helps her mix the colours, describe the objects she is drawing and give professional comments on how the piece has turned out. All these are people she pays for their services; cash that is not always available.

Initially, she would move around with her then 12-year-old daughter looking for buyers.

“We used to go to restaurants, students’ hostels and at times be chased away, have doors slammed in our faces…sometimes we would be lucky and get some money to cater for the children at school.”

Her husband who had stood by her was also not doing well, having spent most of the money in different hospitals trying to find a solution to her sight.

And like most businesses have been hit hard by Covid-19, Kivumbi’s business is no exception; most of her customers were tourists and because of travel restrictions, business has ground to a standstill.

“I had strategically located my gallery at this guesthouse because as many foreigners book in, they would be impressed by my artwork and buy some of it. Now that they are no longer coming in, the cash flow is low, yet the expenses still stand especially the expensive rent.”

Besides tourists, she also depended on the hospitality industry where she would hold exhibitions in hotels and restaurants and supply others with art pieces. That channel too, fell through.

Yet, Kivumbi is amazingly standing proud, sharing her knowledge and skills with fellow visually-impaired Ugandans, as well as interested youth and women.

“I train about 250 blind children a year in art, textile designs and jewellery-making from the art gallery, and through outreach programs in Iganga, Kagugube, Nakaseke …”

She also trains art students in tertiary institutions including Makerere University. In March 2016, just one year after opening up her art exhibition centre, Kivumbi was awarded a medal on International Women’s day by President Museveni for promoting livelihood of people with disabilities through visual art. She has also met the dignitaries whose portraits grace her gallery.

Not one to allow disability to stop her from inspiring others, Kivumbi also does motivational speaking and counseling for people with disabilities.

“Many people who have disabilities come to me when they are hopeless, but I counsel and tell them that they can be their own CEOs even in the state they are.”

She believes if more support is availed to her, she can touch the lives of the more than two million blind persons in Uganda.

“If I had transport from one destination to another, I believe I would reach out to visually impaired persons in remote areas and train them in practical skills they can use to earn a living.”

Also: “Art exhibitions are expensive to organize and I sometimes need sponsors to come on board.”

Kivumbi’s art pieces range from Shs 50,000 to Shs 1m; she charges Shs 250,000 for a portrait but the price reduces or increases depending on the size. The jewellery goes for as low as Shs 3,000.

Kivumbi went blind when her first daughter, Amazing Grace Kirabo, was only three years old and she was engaged to Godfrey Kivumbi. In a testament to true love, they married seven months after she lost her sight and welcomed another daughter, Divine Wonders Sanyu, 9, and son Trinity Glory Kivumbi, 7.

Kirabo, who is now 15 is a child author herself, who at the age of 12 wrote her first book, Nurtured By a Blind Mother. The book earned her recognition as Child Author of the Year 2018 by the Uganda Book Forum and was also offered a scholarship by the Kabaka.

Nine-year-old Sanyu is a poet and author as well, while seven-year-old Kivumbi is a pianist. She has trained all her children in art and they also participate in making some of the art pieces sold at the gallery.

HOW SHE LOST HER SIGHT

In November 2008, Kivumbi says she got a terrible headache; her eyes popped and the jaws locked. The headaches persisted and she began feeling dizzy, but she would feel better after taking some medication.

A month later, the dizziness became more frequent and one day while at work, she collapsed and this was the last time she saw anything.

“I was taken to all the big hospitals but after doing all types of scans, the doctors could still not diagnose what was wrong with me. All they could say was that my optic nerve was paralyzed but they could not see what had caused it.”

She had never experienced any eye problem and so this came as a total shock to her. When specialists failed to fix her sight, they advised her to go to rehab to learn how to live with her condition. Kivumbi’s love for art is what got her back up after seven years of self-pity. She counseled herself and came to terms with her new normal.

“I had too much passion for art … that acted as therapy to come back and do what I am passionate about.”

She says the university students who would still go to her for trainings also inspired her to get back to studio and make art. One may wonder how a blind person can draw and paint, but Kivumbi says it is the brain that sees but of course one has to train it. Where she needs to use colour, she marked her tins using braille, especially for primary and neutral colours.

“I visualize images in my mind and before sketching them. I run my hand across a manila paper to create an imaginary work of art. I then make a sketch with my right hand using ink. With the help of a sighted person, I cut the sketch out of the manila paper, creating a negative which I place on the canvas,” she says.

A sighted person also helps her identify and sort the colours. Right now Kivumbi has given up on seeing again; her only hope is in a miracle from God.

She then joined Makerere University, where she graduated in 2002 with a bachelor’s degree in Development Studies and later a master’s degree in Ethics and Public Management.

Before she went blind, Kivumbi was the administrator of Makerere University Art Gallery and she set up the Magezi Arts and Exhibition Centre in September 2008 when she still had her sight.