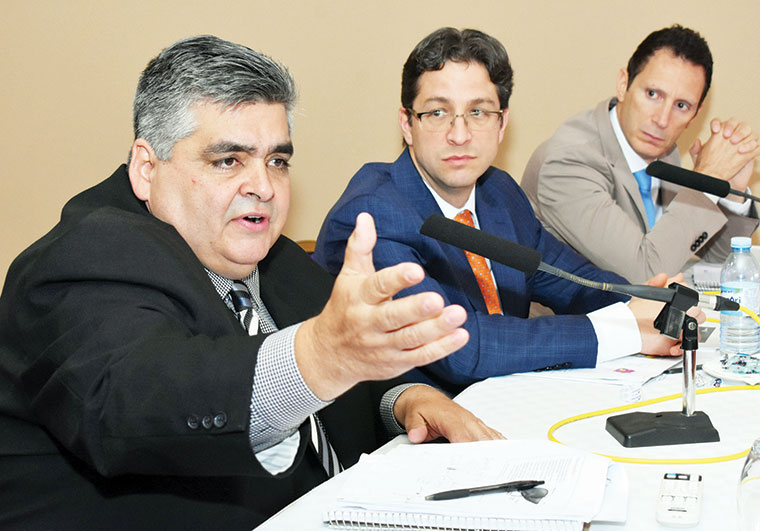 Officials from Abbott at the event

Abbott, a global healthcare organisation operating in over 160 countries, on Monday announced that its recent clinical trials in Uganda demonstrated a high sensitivity of its Determine HBsAg 2 rapid test for the detection of hepatitis B surface antigen in serum, plasma or whole blood.

Speaking at Speke Resort Munyonyi in Kampala ahead of the first-ever African Summit on hepatitis, Jackie Lustig, the director of public affairs at Abbott said their research is a game changer as it will increase the detection rate and treatment of hepatitis B.

She said Uganda is one of the worst-hit countries by the epidemic that affects the liver. Almost six percent of people in sub-Saharan Africa have the deadly virus. Damian Halloran, the vice president of Abbot in charge of infectious diseases, emerging markets and rapid diagnosis, said the research will lead to more treatment of people.

“The Determine HBsAg 2’s unparalleled sensitivity in whole blood, plus its portability and ease-of-use, provides technology that can dramatically scale up testing services so more infected people can know their status and get treatment earlier,” Halloran said.

“The test is an ideal tool for African countries stepping up their hepatitis B elimination initiatives.”

According to the 2016 Uganda Population-based HIV Impact Assessment (UPHIA) Survey, nine out of 10 Ugandans do not know their hepatitis B status. Since 2015, the ministry of Health has implemented a nationwide education program to inform people about hepatitis B and has provided limited testing, treatment and vaccination services.

Much of the testing and treatment is provided by private health facilities at prices unaffordable to most Ugandans. Testing and vaccination can cost up to Shs 200,000, depending on the health facility one goes to.

Dr Luis Gonzalez,  the global director of medical and  scientific affairs, infectious disease and emerging markets at Abbott acknowledged that indeed testing, vaccinating and treatment of hepatitis is still very expensive because governments and global partners have not invested a lot in the virus despite its threat.

“That’s why we are having this summit to call on governments to pay more attention about the disease,” Gonzalez said. He added that countries like Uganda were able to bring down to a single digit HIV prevalence rates because of the massive investment.

The World Health Organization wants at least 30% percent of people with hepatitis to be diagnosed by 2020 and 90 percent by 2030. In order to reach these targets, Dr Robert Downing, a senior laboratory technical advisor at the Uganda Virus Institute, says access to hepatitis testing is very key.

“To achieve the WHO targets in Uganda, it is crucial to increase hepatitis B diagnostic testing, especially in the highly endemic regions of the northern part of the country. Given the performance of the Determine HBsAg 2 rapid test in whole blood and the rapidly obtained result, this test is well placed to support reaching Uganda’s targets for hepatitis B elimination,” Downing said.

Hepatitis B is a serious liver infection caused by the hepatitis B virus. For some people, hepatitis B infection becomes chronic and can lead to liver failure, liver cancer or cirrhosis of the liver [a condition that permanently scars the liver].