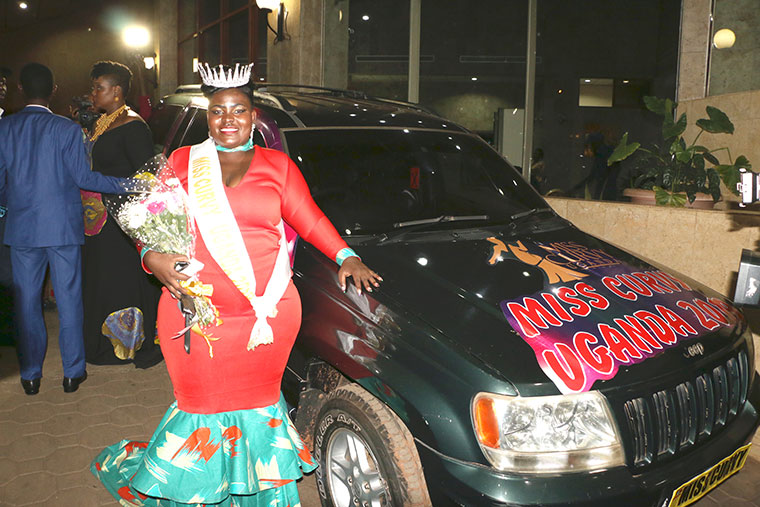 “God had a lot of material for Uganda,” a triumphant minister of state for Tourism, Godfrey Kiwanda Ssuubi summed up the Miss Curvy beauty pageant held last Friday at Imperial Royale hotel.

When all the wide hips and big bums had shaken their way down the runway, 25-year-old Belinda Nansasi was crowned Miss Curvy. Even the ushers were curvy, a promise of the night ahead for the pageant that is a rebuke of shows that force Western standards of beauty (skinny and tall) down Ugandans’ throats, yet the average Ugandan women is quite curvy.

However, by 9pm the hall was still half-empty, forcing organisers to rearrange the seating order regardless of ticket price, since the guest of honour had arrived. The contestants made a debut appearance dressed in black, tight pants and white tops.

They were to be judged on beauty, intellect, confidence, smartness and above all, curves, as the show went on. And Nansasi carried the day.

Minister Kiwanda said when Ann Mungoma, the CEO Miss Curvy Uganda, approached him with her vision of appreciating plus-size ladies, he liked the idea and participated in the launch; what he did not see coming was the avalanche of criticism that followed.

“Tourism begins with the people and this is why we are coming up with initiatives to promote this and we shall be with them in the various projects,” Kiwanda said.

Government Chief Whip Ruth Nankabirwa, who was the chief guest, urged Ugandans to first understand what they are talking about, before making comments.

Mungoma said: “It is good to see a child grow; this was a laughing subject when we launched it. Everyone thought they would drive it in their direction and I said, time tells the truth and this is the time.”

Well, even on D-day, the critics were at hand to scoff and laugh; there were claims on social media that the winners were pre-selected depending on how much their benefactors supported the pageant, and not based on the judges’ criteria, an allegation The Observer could not independently verify.

Even Nansasi’s prize of a branded Jeep Grand Cherokee was rubbished by critics as too old, but the 25-year-old also won a full scholarship from Victoria University, an air ticket to Turkey sponsored by Victory School of Beauty and will represent Uganda at the Miss Curvy Africa competitions in Nigeria later this year.