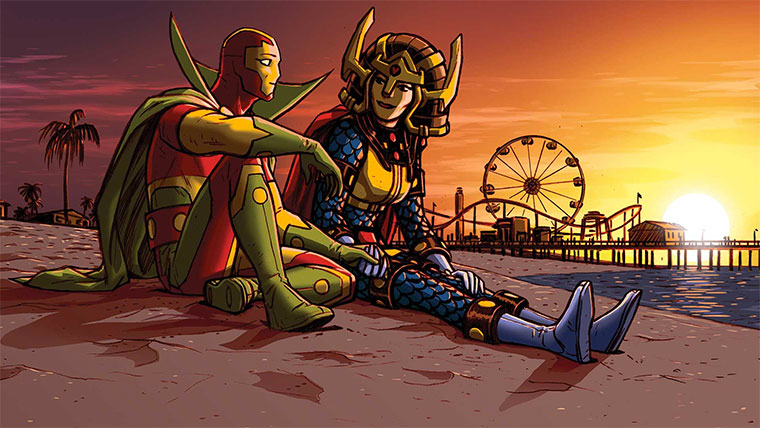 Mister Miracle is an ancient comic book character. Jack Kirby created him in the early 1970s, and honestly, I cannot say I am a fan.

The character comes out of the ‘New Gods’ wing of DC Comics. In DC’s fictional universe, God is a character called Highfather, and his arch-nemesis is Darkseid, essentially the devil. Long ago, Highfather, who lives on the world of New Genesis, went to war with Darkseid who had made the hellscape of Apokalypse his home.

This clash between good and evil went on for eons. Billions died, and when Highfather could suffer the losses no more, he proposed a truce with Darkseid, one that was only ratified when the deities exchanged sons.

Orion, son of Darkseid, was whisked away to New Genesis. Scott Free, son of Highfather, descended to the depths of Apokalypse. So, while Orion marinated in the luxuries of heaven, Scott suffered the agonies of hell. But where other weaker minds might have broken, Scott Free thrived, eventually escaping, making his way to earth and assuming the persona of Mister Miracle.

But like I said, I don’t like Mister Miracle. I think the idea of a superhero whose special power is the fact that he is really good at escaping traps is dumb. I don’t even like the whole new gods concept.

In fact, let us take a step back; I don’t like comics. Sure, I have read a few titles but for the most part, the medium is not my cup of tea. So, when I tell you that Tom King’s 12-issue Mister Miracle mini-series is one of the best things I have ever read, you need to understand the weight that holds.

Mister Miracle starts out at a point of tragedy. He tried to kill himself. Why? Well, no one knows. Mister Miracle knows. But he is not saying; or rather, he keeps telling us but you need time and a keen eye to read the meaning between the lines.

The public is at a loss. Mister Miracle was one of the world’s most optimistic figures. What would drive such a celebrity to take his own life? No one truly knows. His wife, Big Barda, is doing what she can to make sense of his actions, and to support him in his time of need. But trouble is brewing over the horizon.

Highfather is dead. Darkseid is marching on New Genesis. A new war has begun, and Orion, Mister Miracle’s adopted brother needs him to step up, to lead the forces of New Genesis in battle against a tyrannical force.

I cannot even begin to tell you what makes this comic so awesome. You need to read it for yourself to appreciate the true genius of Tom King. Its protagonist, Scott Free, is a broken man. But King does not tell you that. He shows it to you, not through the dialogue or even the pictures but the art style.

Every panel oozes insanity and confusion, and madness. I have never seen art that so effectively captures the soul of a character. To say anymore would ruin the magic of this comic. You need to read it for yourself.

And if you don’t like comic books, like myself, if you think they are beneath you, like some people, trust me when I say that Mister Miracle is the mini-series that will change your mind. These 12 issues are literature at its finest.