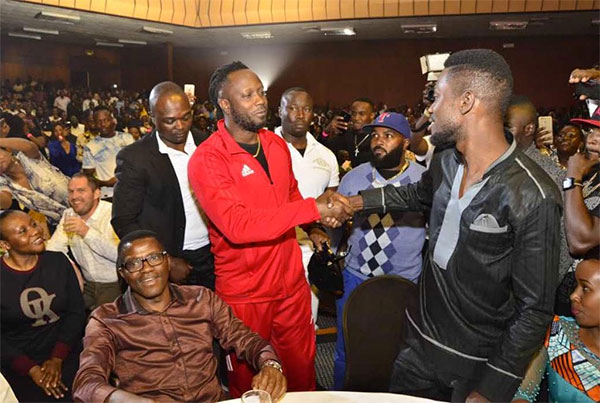 After Moses Ssali aka Bebe Cool cancelled on Quick Talk twice, he finally sat down for a chat at Kiwatule Recreational Centre. Running 30 minutes late, Bebe is very composed; a contrast to the artiste known as much for his public spats with fellow musicians as he is for his good music.

Throughout the interview, he is whatsapping and tweeting, in addition to receiving calls, but makes sure to apologise afterwards.

This is about the majority of people who never talk much, but they exist with their opinions… I use the slogan for the political situation now.

Yeah, the political arena is so hot. There have been arguments between so many people and there has been a lot of aggressiveness by those against the government.

[Laughs] They make a lot of noise thinking they are many, forgetting that when it comes to voting and elections, they are few.

I see. And what have you been up to since the Boxing day concert?

I have been doing music. I just finished making one of the songs called Easy and I will be unveiling it come February 1 at Theatre la Bonita.

Does that mean the live performances suspension you had imposed on yourself is off?

By the way, when you hugged Bobi Wine, did you really make up?

Eh. But you made so many people happy at that Eddy Kenzo concert!

That was a diplomatic gesture expected of mature people, but [Bobi Wine and I] don’t eat from the same plate! That’s according to my thinking. [Sorry, Kenzo fans…]

When did your fights with Bobi start?

These are music clashes; they began when we were young and small people. I had just come back from Nairobi and it is the time I quit Firebase Crew. [Firebase Crew is the Bobi-led outfit.]

[Laughs] I hope so and I pray we don’t reach that level.

How do you think these fights can end?

He keeps saying we were young, but as people grow and mature, they apologize on the things they did when they were young and life goes on, something he has failed to do. He dissed my father and my wife in his songs, something other musicians have never done. [Quick Talk presses him on which songs, but he says he doesn’t remember which songs]

[Sounding angry:] In music that is expected, but you can’t cross the line of family. Some things need common sense.

OK… sorry for that. So, last year revellers threw bottles at you on the Tarrus Riley stage. What was going through your mind?

It was annoying but understandable, depending on which side of the coin you are looking at; on their side it was misguided, on my side it was expected.

What was your family’s reaction?

The family is used to such things. I think this is not the biggest thing that has happened to me. [Just then a young boy walks up and asks, “Are you Bebe Cool?” Bebe says yes. The boy asks for a selfie and without hesitation and with a smile, Bebe poses for a photo.]

That was cool. Now, what don’t people know about Bebe Cool?

People assume that I’m arrogant, bad, inconsiderate… that is something bad unfortunately.

Why do you think there is a lot of fuss about your loud support for President Museveni?

I think those people would have wanted me to be on their side, but I’m not. But for me I appreciate what [Museveni] has done. Some say he has done nothing at all, but that’s not the case.

I appreciate the little I have. As Bebe Cool, I believe in [Museveni’s] ways, his governance and tolerance. Many people are not travelled; they don’t know and have no comparison, and this is the only government they know.

Of recent, you have been on talk show after talk show; any political plans?

No! I’m not planning to join any political movement… I have been supporting Museveni for the last 17 years including composing songs for his party.

I composed Bamuwe Ekisanja and Movement Twagalajiza [and of course 2015’s Tubonga Naawe]… but today Kyagulanyi and his fans have made a fuss out of it.

Enough of politics. What kind of boss are you? [Bebe heads Gagamel Entertainment.]

I’m an easy person but a no-joke when it comes to delivering. I’m soft when things are done – I don’t believe in failure; failure is just a challenge that can be worked upon.

A good philosophy. Are you grooming any young talent?

We are planning to open up a record company to sign up young people and help them do audio and video.

You have a singing son, Allan Kendrick. What is your role in his career?

I guide him and when he sets himself to stand, I will continue supporting him until he is independent.

Are you grooming him for the Gagamel CEO job?

Of course, but he must be prepared to set himself up and take over his life, and not my life.

So, which musician do you admire?

[Thinks on it] It is such a bad time. I used to admire Buju Banton, but I have grown up. People should look up to me to inspire them. [He pauses the interview to sing and record a happy birthday song on his phone.]

Wow! Who was that for?

I was wishing a happy birthday to one of my fans.

Nice! Back to the subject of who you admire…

Fik Fameica and Sheebah; Sheebah works very hard, has proved to me that failure is not an option and that’s our motto at Gagamel Entertainment. Fik is also doing well and if he makes four years up there, he will have gone to another level.

You really love Zuena; why is it a public issue?

I find it awkward. I have the right to talk about my wife all the time; there is a culture of people who believe women are supposed to be silent and in the dark but I have demystified that; so, that is very painful for those that don’t support it.

When was the last time you took her out?

[Smiling] We go out once a week, especially on Sundays, but she can also choose two days of the week of her preference. [Quick Talk saw Bebe, Zuena and their children having lunch at Café Javas Kamwokya on New Year’s Eve.]

Do you cook for her?

[Laughs heartily:] It’s been long since I cooked for her.

What do you remember about your first date?

We went to Guvnor, although I was very nervous on that day. I thought she would [reject me] because I was rough and she was a soft, tender and quiet girl. [Bebe and Zuena met when the latter came to Kampala from Jinja as a very pretty 18-year-old in 2001, to be part of the Miss Uganda pageant.]

And fast forward to Bebe the ‘politician’, musician and businessman; when do you have time for the children?

I squeeze in time. There is no specific time but I get two to three hours for them. The boys are growing fast and need time to relate, chat, be guided and even play with their father. [He has three sons and a daughter with Zuena.]

What are you teaching them?

I tell the boys to be very tough and aggressive to life, but also gentle. I tell them failure it not an option, the world will not favour them because they are Bebe Cool’s sons. They have to work hard and get something for themselves.

[Brightness up:] Beatta can do music; she is so good at music and acting so there will be help from the father…because that is where the father is.

Thanks for your time, Bebe.