Patrick Kaddu is the toast of Ugandan football at the moment. The striker wrote his name into the echelons of Ugandan football after scoring the only goal in The Cranes’ 1-0 win over Cape Verde last weekend to send Uganda to the 2019 Africa Cup of Nations. John Vianney Nsimbe tracks his career from a destitute to a national treasure.

Back in 1993, Patrick Kaddu was born into deprivation and want, much of which defined and shaped his childhood. And had it not been for a stroke of luck, the football fraternity would never have seen him anywhere near Namboole stadium.

Born in a family of six to Efusa Nsubuga and Hadija Nakitende, Kaddu is the fourth born and grew up in Bbiina in the heart of Luzira, a Kampala suburb. Like all his siblings, Kaddu had a troubled education, often skipping from Mukama Kyakuwa nursery school and St James primary school for fees defaulting.

But after so much persistence, in 2005, Kaddu completed his Primary Leaving Examinations, although he could not get his results because he had not cleared his fees. However, that was least of the problems life could throw him. Right about that time, his father sold off their home, and disappeared, leaving the rest of the family homeless.

Kaddu’s mother, who was and still is a grocery seller in the Luzira market, could not afford fending for her children. As a result, Kaddu dropped out of school for two years, during which time his mother left Luzira to look for more income. But Kaddu chose to remain in Luzira on his own, sleeping on shop verandas in the market, and sometimes the rudimentary video hall (kibanda), where he worked as the cashier.

During the day, Kaddu ventured into chapatti making. But how a 12 to 14-year-old chooses to remain alone, and not follow his mother at the time she decided to leave Luzira, is kind of odd, although not to Kaddu. He had a plan.

Kaddu had fallen in love with football, probably more than the attachment he had with his family. By staying in Luzira, he had a chance to keep with his village football team, Destiny Soccer Academy.

Nakitende said: “From a very young age, Kaddu has been crazy about football. He would play on end, and I used to punish him for missing lunch.” But in hindsight, Kaddu’s football craze in the early 2000s, resulted in him being nicknamed Salgado, a name adopted from a former Real Madrid player.

Because of how dominant the Spanish club was then, Kaddu’s football successes at the time, were related with the team. In fact, in Luzira, Nakitende is referred to as Maama Salgado. In The Cranes camp, assistant coach Matia Lule refers to Kaddu as Salgado too.

Although Salgado is a childhood nickname that stuck, Kaddu’s favourite forward is Frenchman Karim Benzema. And it is easy to tell why: Kaddu’s style of play is similar to that of the Real Madrid man in certain ways - good first touch, quick, physical and unselfish.

Such are the attributes that Swaleh Mugisha, Kaddu’s youth coach at Destiny Soccer Academy in Luzira, saw in him, when he decided to get him a scholarship at Kibibi Parents School in Butambala. That was two years after he had dropped out of school.

“I do not think I have met a human being as good a person as Kaddu is. From when he was little, he has been disciplined, but also very hard-working. That has enabled him reach this far,” Mugisha said.

Mugisha credits Kaddu for also doing well in his academics. Kaddu posted a second grade in his O-levels in 2011, after which, Answar Islamic School on Gayaza road offered him a scholarship to study his A-level there, primarily because of his football promise.

By 2013, he completed, scoring 15 points, although he was unable to continue to university education, because of the lack of finances. By then, Kaddu had joined Maroons. Former Maroons coach Asaph Mwebaze said, “He first joined Maroons in 2011, because I saw a natural fox in the box kind of striker.

“But Kaddu did not play as soon as he arrived, because we still had George Abege, Ibrahim Kongo and Pate Wanok more established than him,” Kaddu left Maroons in 2014, following their relegation, to join Kira Young in the top flight for the 2014/2015 season. He scored six goals in the season, before Kira were relegated.

He then returned to Maroons for the 2015/2016 season in the Uganda Premier League (UPL) and was the club’s top-scorer with eight goals, although they were relegated. In the Fufa Big League (FBL) during the 2016/2017 season, Kaddu inspired Maroons back into the UPL. He was the FBL’s top-scorer with 18 goals in 22 games.

Kaddu’s stock had risen, as he proved to be more prolific than any striker Mwebaze had ever handled in recent times. It was time to seek greener pastures. URA FC showed interest in Kaddu, yet dragged their feet.

KCCA FC then jumped in to secure his signature since they had lost Geoffrey Sserunkuma. But even there, Kaddu was behind Muhammed Shaban, Derrick Nsibambi and Tito Okello. Figuratively, Kaddu was feeding on crams, as manager Mike Mutebi gave him little playing time.

And because of that, Kaddu lost a bit of his scoring touch. This led to fans getting onto his back. “I have heard a lot of negativity about me. But I did not mind it, because each time I am criticized, it motivates me to work hard,” Kaddu said.

Clearly, Kaddu is strong-willed and very confident in himself and does not care about the hecklers, provided his coaches believe in him. Perhaps, it is the tough life he has gone through, that makes him resolute. Three years ago, Kaddu chose to become Catholic, leaving the Protestant faith he and his family were in.

In June, Kaddu led KCCA’s line against Vipers SC in the Uganda Cup final in Bukedea, and played a big hand in his team’s winning goal. His fighting spirit in that game was unmatched. Despite suffering a head injury, which covered his head with blood in that game, Kaddu played on with a bandaged head.

I remember after that game, Kaddu was asked why he did not seek to be substituted. He said, “We were already a man less, following Sadam Juma’s red card. We needed to win the Uganda Cup badly. So, I had to stay on and fight.” Kaddu was the Uganda Cup 2018 top-scorer with seven goals. 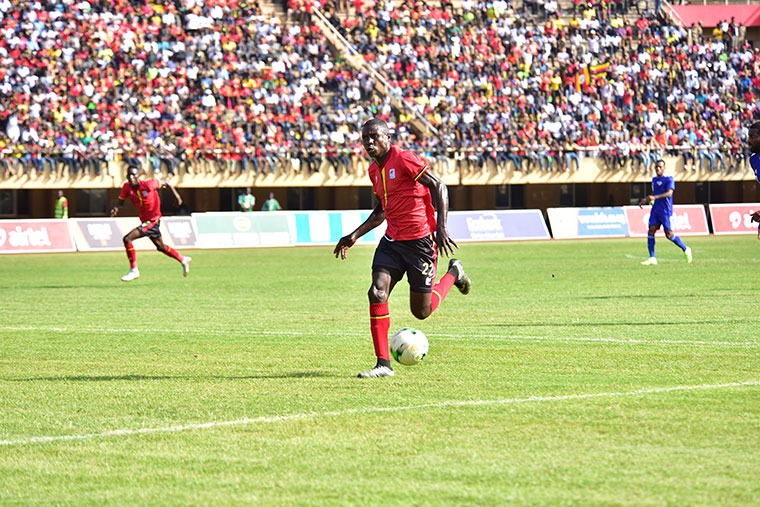 Interestingly Mutebi had lined him up for a loan back at Maroons this season. Now the rest is history. Notwithstanding, Kaddu’s praises after Saturday, he told The Observer that what he has done is nothing so far.

He said he has to continue working hard in training to improve. “But above all, I am determined to get to the levels that players like Denis Onyango have reached in professional football.”

How that would please Kaddu’s mother! She said that already her son has transformed their lives. “Now I live in a place with a wall fence around, because of Kaddu. And even my businesses have improved,” Nakitende said.

Nakitende was at Namboole, seated in the open stands, right behind the goal in which her son scored. Like Kaddu, she could not hold back her tears in the stadium, as was the case during the interview.

“I know my son cried because he remembered how far he had come, and of course the hopelessness of our lives a few years ago,” Nakitende said.

In October 2011, Kaddu was at Namboole to see Uganda fail to beat Kenya.

“I remember my teammate Mike Mutyaba missing a gilt-edged scoring chance (I tease him about it), that could have seen Cranes qualify for Afcon. From that day, I drew inspiration, telling myself, that one day I would score the goal, that takes Uganda to Afcon.” 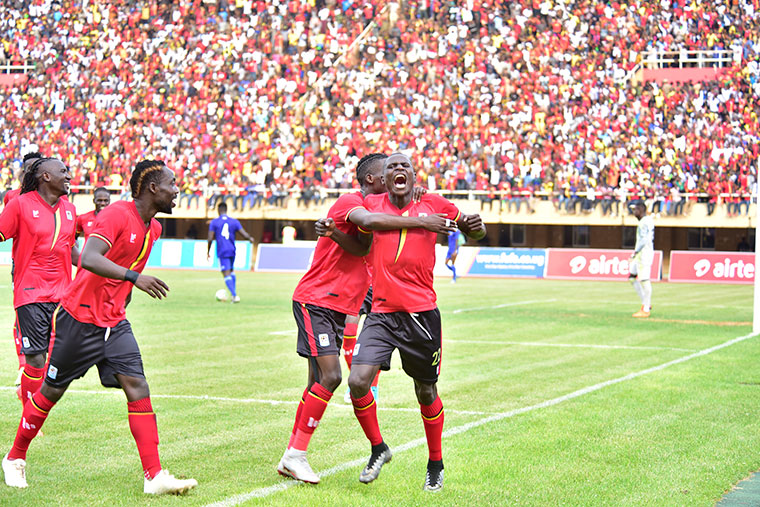 Indeed it has been done, although Kaddu must know too well, that a number of Cranes forwards have burst onto the scene, but disappeared sooner than they came in. A case in point is Frank Kalanda and Yunus Ssentamu, who excited many, but fell by the wayside.

However, Cranes assistant coach Matia Lule said, “I feel Kaddu is so focused on the game, to waste himself.” Perhaps, that is the reason why against all odds, Kaddu remains Cranes coach Sebastien Desabre’s pick. Kaddu is considered tactically smart by Desabre.

At 25, as a young father, Kaddu’s life story is nothing short of inspiring. Yet, nothing will be as remarkable as him scoring at the Afcon in Cameroon.

His celebration, which is a monkey dance stroke, is a novelty. It is a self-creation, a collector’s item, that broadcasters will die for, as they make their Afcon promos from a forward once hopeless, but now a dreamer.