Nabuganyi is a remote village in Busana sub-county Kayunga district of Buganda sub-region bordering Kamuli district of Busoga only separated by River Nile.

The two districts are connected by a ferry run by the Uganda National Roads Authority which makes several trips a day ferrying people and their merchandise ranging from cattle, firewood to charcoal.

Contrary to what is found at many landing sites across the country, here it is very quiet with just a handful of petty traders dealing in roast maize, groundnuts, hard corn and refreshments such as water and soda, never mind that they are served warm for there is no electricity.

Young boys in their teens, half naked can be seen racing towards and away from the river. Others are seen seated around mounds of river sand while others are trying to load sand on a huge Kayunga district local government truck.

These river boys clearly know we are up to something but they choose to ignore us. We approach a group of three boys.

“We are doing a story about sand mining in this area and we want to see how it is done,” we told them.

The boys tell us that they had finished the day’s work but could go back to the river to show us how it is done if we paid them. Well, paying the news sources wasn’t one of the things that we planned for but it was the only way we would get the story. So we agreed to pay Shs 25,000 to see how sand is mined.

At 1.15pm accompanied by two boys and two men we set out. Of the four of us, at least two had never used a wooden canoe, let alone travelled on water. It was a risky journey; eight people on a very old canoe without life jackets.

When we set out to go to do the story, it hadn’t crossed our minds that to be able to see, touch and feel the story, we had to go into the middle of a fast-moving river. We moved along the edges where the water was a bit slower moving in the opposite direction. For almost an hour we moved a distance that a speed boat would cover in 10 minutes.

The reason for going into the middle of the river is because that’s where the current begins to drop and the river drops whatever it has been carrying.

It is at this point where the river starts to lose steam that the boys dive into the water with cut-off jerricans and start dredging for sand. Normally, this is work of two people. One remains on the boat while the other dives. To fill the boat requires at least 20 dives; an activity that takes between 30 minutes and one hour.

One must be a very good swimmer who can spend five to seven minutes in the water.

“When it rains it becomes very hard to mine this sand because the water is too much and moving too fast so it carries the sand very far away from here,” Ronald Ocayi , 15, told us.

Ocayi and George Kenkwatize, 12, have been doing this job for over a year now.  They claim that they still attend the village school but have to mine sand in order to raise school fees.

James Gavumenti, 18, should also be in school but he says he has done this work for the last four years. For all the years he has done it, he has never heard of anyone who has drowned in the river despite the tender age they start engaging in the activity.

“This is work for youths between the age of 10 and 22. After that people begin to look for work elsewhere,” Gavumenti says. 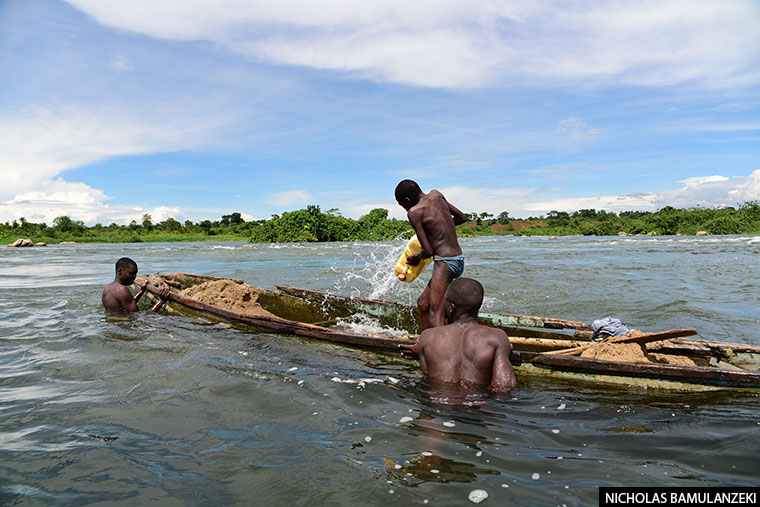 There are nine such places form which sand is mined along the River Nile in Busaana.

When you compare sand mining in River Nile with what Chinese-run dredging enterprises are doing on Lake Victoria you see a huge difference.

Rivers by their nature are not normally a habitat for aquatic organisms like fish and therefore, on the surface mining sand from them, and the method used seems not to be environmentally unfriendly. That’s why no attention has been paid to the activity.

The same cannot be said of the use of large ships and machines used to dredge sand and everything from Lake Victoria in the areas of Entebbe, Katabi, Kigungu among other places in Wakiso district.

It was for their adverse effects to the lake that Wakiso chairman Matia Lwanga Bwanika vehemently opposed the activity that [is] supported by President Museveni’s young brother, Caleb Akandwanaho aka Salim Saleh.

There is no clear law that regulates sand mining. According to Article 244 (3) of the constitution, sand is not one of the minerals that are regulated and held in trust for the people.

The article states that; “For the purpose of this article, “minerals” does not include clay, murram, sand or any stone commonly used for building or similar purposes.”

However cabinet recently approved a new policy on sand mining. Speaking recently to a group of journalists in a training organised by the African Center for Media Excellence, Vincent Kato, the assistant commissioner in charge of geology and geochemistry in the ministry of Energy and Mineral development, said that although the law is yet to be reformed, it will be mandatory for everyone mining sand for commercial purposes to first acquire a license from his ministry.

This will likely throw open the doors for companies like the Chinese-owned Mango Tree to legally start mining sand. Until now, they have faced a lot of resistance from both politicians and the National Environment Management Authority (Nema).

When this newspaper visited several areas where sand mining used to take place, many of them had since been closed. Steven Ssekayombya a landlord in Nkumba Bukolwa zone on whose land Nigerians were working to extract sand from Lake Victoria, said their stopping had nothing to do with the government ban.

“The Nigerian owners of the business were not benefiting from it because they were not based here. The people they had employed to run the business on their behalf I think were just cheating them. So they closed it,” Ssekayombya said.

In fact mistaking us for people who had an economic interest in the matter, he proposed that if we were interested he was ready to give us land.

“Bring money and we work, I have no problem about it,” Ssekayombya said.

Other places we visited such as Bwaise, Bukaaya both in Katabi sub-county; Kayirira in Nkumba parish had since been abandoned.

“For the last two to three months there has been no sand dredging here. Actually a few weeks ago the Chinese came and took their machines away,” Richard Tayeebwa, a resident of Kayirira, told us.

Bwanika confirmed that indeed in many places in his area illegal sand mining from the lake had stopped. He said his efforts even when resisted by very powerful people within and without government had borne fruits.

“I’m a very small man who dared to fight very powerful people after people in more powerful positions than me had feared. Some people in offices that are responsible for the environment know that activities like lake sand mining are bad for the environment but they fear to come out because they are safeguarding their jobs. But when they realised that they had a colleague who they can fight with they also came out,” Bwanika said.

He, however, says it’s not yet time to pop the champagne, especially after the new policy on sand mining was announced. To Bwanika, the new policy wants to regularise the flagrant destruction of the environment.

“For us as local government our role is to implement government policies but I must say this is a bad policy because it seeks to remove all the safeguards to environmental degradation. You cannot destroy the environment simply because you have the law in place that allows you do it. If it is environmental degradation it is degradation no matter how it has been dressed. My interest has never been economic, or revenue collection, it is about pollution and sustainable development where those who will come after us also benefit from these natural resources…”