Having dropped a lucrative career in telecommunications engineering with MTN Uganda, PATRICK IDRINGI, aka Salvado, returns in the second edition of Man From Ombokolo this evening at Imperial Royale hotel.

The engineer-turned-comedian narrated his comic journey to Samson Baranga.

Idringi is the fourth born in a family of five boys and three girls. He describes his family life as interesting, loud, quarrelsome and full of laughter.

While his mother Joyce Dawa owned a stall in Bugolobi market before it was rebuilt, his father, Lawrence Dawa, operated a retail shop to make ends meet for the family. That is how the children managed to go to school. But the children also had to hustle because nothing comes for free.

“We used to sell them to the upper class at Bugolobi flats. We were not wealthy at all, but I will not say we were poor. We never went a day without a meal, and we were never sent home because of school fees,” he says, adding that his parents’ priority was education and welfare.

Growing up in Kiswa zone 2, his father has been the treasurer for the LC-I up to today. Currently, his mother rents out her stall after opening up a shop.

While at Kiswa primary school, he remembers a policy that necessitated all pupils to learn their mother language. That’s how he ended up completing O-level at St Charles Lwanga College, Koboko, in 2001.

He returned for A- level at Bishop Cipriano Kihangire SS, Bbiina, from where he studied physics, economics, mathematics and fine art.

He got a scholarship to study a bachelor’s degree in Education at Kyambogo University to become a physics and mathematics teacher. However, he never took up the bursary because he loathed the teaching career.

Meanwhile, Makerere University advertised a Bachelor of Science in Telecommunications Engineering course, which he settled for.

It was a tough time for him because he had to commute daily to Makerere for four years, besides his parents paying his tuition fees.

In 2007, during his third year at university, Idringi passed the exam given by MTN Uganda as a precondition for an internship placement. He was among the lucky 10.

“Because of my childhood of hustling, I didn’t go there to do internship. I went there to work,” he says, with a look of determination.

The MTN switch in Bugolobi was a few meters from his home. Thus, he would frequent it during his free time since he had access.

“Within three weeks, I had learnt. I was actually working and getting assignments,” Idringi reminisces.

He was not in the system and emailing lists, but used to get assigned because he had already proven himself by solving problems. 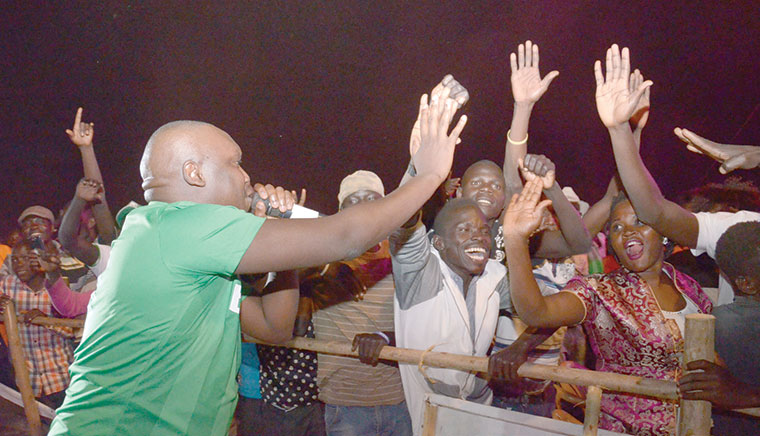 During the sendoff party for that year’s interns, Idringi was asked to return the following Monday. He was offered a 4pm to 6pm gig because his lectures ended at 2pm.

“I thought they wanted to use me. But there was free Internet and free calls. You could talk to someone for hours,” he says.

Thus, he took the offer and gave it his all. In addition, he used to move around different service centers like Lugogo and Crested Towers to repair pay phones.

Sooner than anticipated, he was called to sign a contract with MTN Uganda. He had no idea what that was about, but responded positively. Idringi could not believe learning that his monthly salary was Shs 500,000 after taxes.

“Life started changing. MTN cars used to drop me at school. The swagger started coming out,” he says, with his signature loud laughter.

During that time, he remembers telling stories and making people laugh. He just did not know someone could earn from it. Before graduation in 2008, Idringi was made a permanent staff at MTN Uganda.

Towards the end of his final year at university, he learnt about Theatre Factory and comedian Pablo (Kenneth Kimuli). Idringi started attending comedy shows regularly. He says he approached and requested Theatre Factory proprietor, Philip Luswata, to allow him join the comedy group, but was tossed around until he gave up.

Idringi gave up the chase because he was earning enough as a telecommunications engineer. But deep down, the desire to crack ribs with jokes stayed alive. Even the routine work got boring.

All this changed in 2009 when he read an advert about Stand Up Uganda auditions at Theatre La Bonita. His sisters encouraged him to participate. He had to lie that he was headed to MTN Towers to account for some work done. But he parked his pickup at office and went to the audition.

At the auditions, he was registered as number 5272. It was not just a number. This was a confirmation that there were many people. The two young women registering could not believe an engineer had turned up.

He immediately felt out of place. Most competitors were dressed as clowns in funny clothes, fake bums, boobs and weird makeup. There he was in his corporate shirt, and held an expensive Nokia mobile phone. While they sat waiting for their turn, Pablo arrived and went straight to do his thing before walking out immediately.

Idringi and the likes waited from midday to 8pm. There were three judges, including Abbey Mukiibi, whom Idringi made laugh hysterically.

Consequently, Salvado made it to the top 20 who underwent training for two weeks. As luck would have it, he was also put on the training list for his workplace.  He used to juggle both training sessions. Eventually, Pablo was announced winner, and Idringi a first runner-up.

The experience was life- changing, and set him on the career path as a comedian.  However, he still had telecommunication engineering duties. For starters, he called upon the top 10 comedians to keep the dream alive. They included Alex Muhangi, Pablo, Mendo, Daniel Omara and Kenneth Mulalu, among others.

“We cannot let this momentum die. We are already a brand,” he told them.

He took it upon himself to find a venue. His first option was Zone 7 in Bugolobi, but he says the proprietors tossed him around till he gave up. The next stop was Effendy’s bar in Centenary park. The manager kicked him out, but he left the proposal behind.

Another employee passed the proposal to the proprietor the moment he walked in. Idringi then received a phone call asking him to return immediately.

The excited owner offered him food and a drink because he had been looking for such an idea. That way, the group secured a venue but had no money.  When the crew came to check the venue out, the excited owner opened a bottle of whisky to a toast. “But all of us were not drinkers of whisky,” Idiringi says, in remembrance of the big break.

“It was the most innocent time for comedy because everybody was hungry. There was no bias, no grudges and no competition. Everyone wanted to be funny. The people who really enjoyed stand-up comedy in Uganda did it from 2009 and 2012,” he says.

The first shows at Effendy’s were free; there was also a free crate of beer. The number of revelers kept on growing, and subsequently they started charging Shs 5,000, Shs 10,000 and 20,000. The VIP ticket went up to 30,000, and numbers kept increasing.

It was time to move. They had already established a relationship with Theatre La Bonita, having performed alongside The Ebonies on numerous occasions.

As the revelers increased, so did the rent from 30 per cent to 45 per cent to Shs 3 million for the weekly shows. Issues started arising within The Crackers circles that the directors Muhangi, Omara and Salvado were taking the lion’s share of the money.

Divisionism started and ended with a bitter split in 2012. Dolibondo and Prince Ehma moved to Laftaz comedy lounge, while the rest remained at La Bonita.

Before the split, Idringi had to let go of his job at MTN in September 2011. He says he was due for a promotion, but did not materialize because the bosses might have felt comedy was taking most of his time.

“Whenever I came late, they assumed it was because of comedy – even if I had worked at night the previous day,” he says.

The decision was made easy when he did not get the promotion.

The international gigs started coming in 2012 on the Night of a Thousand Laughs stage in Nairobi and then Nigeria in October of the same year. It is from there that he met a South African promoter who booked him for his first South African show – Stand Up Africa – in March 2013.

One of the acts was Nigeria’s Basketmouth.

“He was blown away by my performance, and made sure I got on the Glo Tour,” says Idringi. “That’s when the Nigerian doors opened.”

Salvado has since done multiple shows in West Africa. He has also performed in the UK, USA and Turkey. At the moment, the man from Ombokolo has an upcoming tour in the Nordic countries after his One Man’s Show tonight.

Idringi says comedy is a universal language, but also recognizes that people want to hear unique stories from other places/countries. That’s why he fronts Ombokolo. Fellow comedian, Pablo, describes him as an extremely generous gentleman off stage.

“He does not blow his trumpet, but the people in his circle know his unlimited generosity,” Pablo says.

He also thinks Salvado should be made the ambassador for Buy Uganda Build Uganda (BUBU) because “he is always fighting for Uganda’s entertainment industry at large”.

Pablo adds that Idringi’s ability to tackle any issue gives him an edge on the comedy scene. Richard Tuwangye of the comedy outfit Fun Factory says Salvado’s stage presence, confidence and ability to improvise have set him apart.

Offstage, according to Tuwangye, Salvado is a social, vibrant and trustworthy character. The father of two has been on record that he has never had a bad show because of the preparations he makes.

“I have become a professional. I have learnt to conduct myself. I have learnt what works; something many of my fellow comedians have failed to learn,” he says, about his experience over the years.

Man from Ombokolo is returning after having missed last year. He says he did not hold the show last year because he wanted to generate fresh content.

He is also doing projects on the side, including a comedy lounge, the Salvado Pizza is set to be re-launched, and he is passionate about farming.

While he does not see himself returning to engineering or cracking jokes in old age, the said projects are part of his retirement plan.