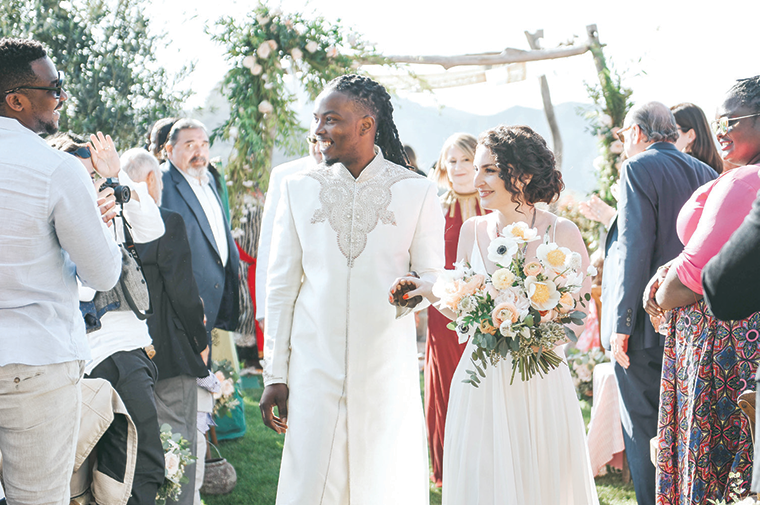 On April 29, Ernest Nsimbi aka GNL Zamba, 32, tied the knot with his longtime girlfriend Miriam Tamar at Cielo Farms vineyards in Malibu, California.

Seven months later, Abu-Baker Mulumba, who attended the wedding, caught up with the Kikankane singer, the one-time godfather of LugaFlo, whose unique hip hip rhymes inspired a generation of artistes.

Why did you choose Cielo Farms?

GNL: We went hunting for venues and this was a place that Miriam’s childhood friend had recommended. I initially wanted a “garden by the sea” type of place with an ocean view but when I saw Cielo Farms, I was totally sold. The place has an incredible view of the Santa Monica mountains and a beautiful sunset.

How many people did you invite?

GNL: We invited 120 people to the main event. We wanted only close friends and family. We decided that our wedding was going to be a reflection of who we are as a couple; we love art, liberal culture and bringing people together.

So, we chose a rabbi (Steven Carr) from the Reconstructionist Synagogue that totally understood and loved our cross-cultural vibe. Our wedding was a fusion of Jewish and Baganda culture, with extra touches from Africa and America.

The rabbi wore a colorful kente scarf and officiated the exchange of gifts that my family carried from Uganda just like you would in a kwanjula and I broke the glass with my foot just like all grooms do at a Jewish wedding.

World-class musicians (Herbert Kinobe and Jjajja John Bashengezi) played at our procession singing traditional Kiganda wedding songs and we had a troupe of African drummers that led our parties to the altar. All African guests were asked to wear traditional African patterns.

Everyone looked colorful and fabulous! We had Moroccan seating designs, Persian and Kilim rugs. Our Jewish chuppah (a canopy beneath which Jewish marriage ceremonies are performed) was covered with Jewish Tallit prayer shawls.

The chef followed the theme of cross-cultural union, by blending cuisines – Middle Eastern and Swahili influences such as samosas, lamb shank, pilau, and eggplant fritters.

What made you feel it was time for the big step?

GNL: I consider myself blessed to have found my partner. We have been friends for such a long time. She has always been in my corner inspiring me to be the best version of me. She is smart, funny, and confident and always wants what is best for me. I always knew it was a matter of time before I put a ring on it for when you find a precious jewel you keep it.

We know you as GNL, at the wedding they called you Ernest…

GNL: Hahaha! My family gave me seven ancestral names, I am spoiled for choice. My maternal grandmother Kakuza gave me Zamba, which I love so much. I rarely use Ernest because of my anti-colonial African views, but it sounds like music when my mum calls me Hernest.

Where did you go for your honeymoon?

GNL: We haven’t! We are just packing to head out this weekend. Our wedding happened at one of our busiest times of the year. We had an album to release; I was doing production for a film company and a month of shows.

So, we began shooting videos right after the wedding. We did tourist activities with visiting family from Uganda and Canada and have been caught up with summer events but finally the fun starts this weekend. The hotel rooms are booked and we are headed somewhere foreign with white sand. Just us.

We are calling it a bae-cation. It’s now been almost six years since we met. We got engaged last year in June.

How was the engagement, Miriam?

Miriam: We’d been talking about taking the next step and getting married, so I’d been waiting for him to officially ask! I kept waiting and was wondering what was taking so long.

I definitely wasn’t expecting it that day- so it was a beautiful surprise and of course I was ready to say yes. I can barely remember what he said because it was so surreal, I just remember my heart pounding with excitement, realizing what was happening.

G gave me a gorgeous multi-colored Moroccan hand-engraved bracelet as an engagement gift - he knows I love Moroccan and African jewelry and specifically did not want a ring (that’s not my style); so, it was a very meaningful and personal gift.

How did you know G was the one for you?

Miriam: G is so kind, warm in spirit and loyal. All of his close friends and family know this about him and these qualities were always the most important for me in a partner.

We quickly developed a deep friendship and share a sense of humour. But our shared creative interests and passion for culture, along with his sharp intelligence are what make him a match for me. I tend to be a realist, whereas G is an optimist; so, we balance each other out.

You spent a year in a long-distance relationship...

Miriam: Our year apart was very hard. We didn’t know if it would work, but neither of us ever let fear prevent us from taking risks. G came to visit me once during that year, and otherwise we talked on the phone almost every day and did a lot of video calls.

How did your Jewish family receive the news of your relationship?

Miriam: G’s family was wonderfully receptive to me from the very beginning. We visited his Jjajja’s house with his parents and aunties, and his parents’ house, and hosted his family for Christmas at our house all in the first few months of dating.

My Jewish family had a harder time accepting our relationship in the beginning. While they liked G as a person, they expected me to marry someone Jewish to preserve our culture. But I’ve always been someone who follows my own path, and eventually they were able to support us and know that ultimately the most important thing is for us to be in a happy and nurturing relationship.

Guests enjoyed your music collaborations at the wedding…

Miriam: We performed Leo Ni Leo, which means Today is Today. Its lyrics fit the event because it says be present in the moment because today is a day of joy. We also did Mujje, because our crowd requested it.

Does that mean the Nsimbis will only stay in the USA?

Miriam: Nsimbi is an international band based in Los Angeles, but our home and hearts are in Uganda.  So, if we are not on tour, we will either be at our home in Uganda or California.

GNL, you guys had no best man or bridesmaids; why?

GNL: I think there is no written rule that a wedding is supposed to have a best man and bridesmaids. Following a procession of our close family members, we chose to walk down the aisle alone to symbolise that we are coming to the marriage as individuals, joined at the altar in the presence of God but with the support of our families and friends. Our parents were standing on either side of the chuppah in support of the union.

How did you meet?

GNL: We met on a Friday at a very popular bar in Kampala. I had just concluded a country tour and was celebrating with friends. Earlier that day I had sworn that I was going to be single forever (that kind of determined swear where you lick your index finger and pretend to slice your neck with it) But the heavens had different plans. I met Miriam that night.

The next day I had a meeting at an events company and ran into her again. The next day we ran into each other at a gas station and planned a real date. We realised we were neighbors and also had mutual friends in Gulu.

Our connection was instant; we started dating exclusively and have been together since then. The friendship and chemistry were natural from our first conversation, and there were no games; just a genuine bond of people from such different worlds who somehow seemed to get each other. 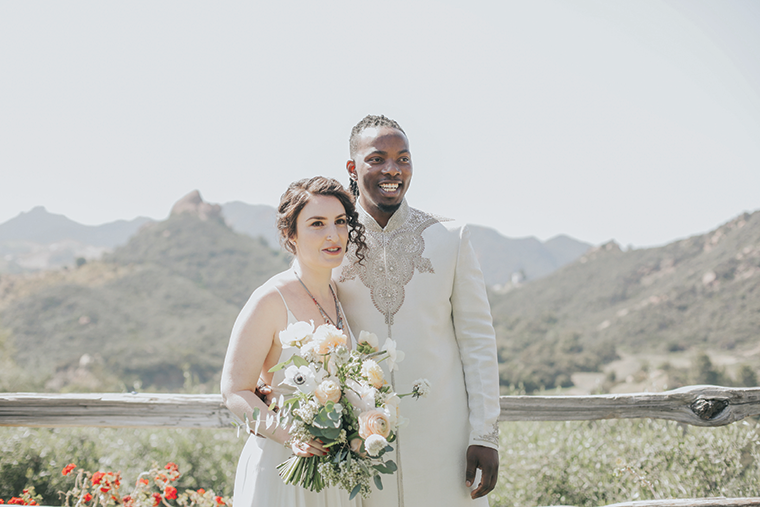 What is the most memorable moment about your wedding?

GNL: Moments before our first dance, Miriam and I were in the barn waiting to be announced to take the floor when we both realized that we had been so caught up in the romance and family that we hadn’t rehearsed for this part.

In the middle of contemplating our impending embarrassment, she looked at me and said, “let us just enjoy ourselves and dance to Affairs of the Heart like we are in Kampala”.

How do you advise other cross-cultural couples?

GNL: Define your own relationship according to your needs, beliefs and vision for each other and do not allow society to determine your destiny. Enjoy each other’s culture and realise that what you have is the best of both worlds.