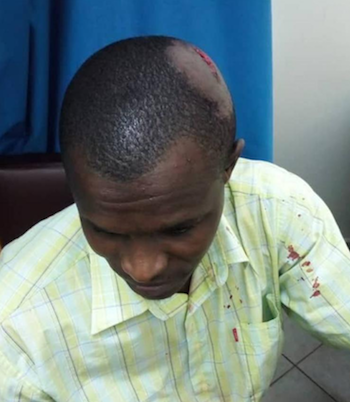 Dr Ronald Luwangula a senior lecturer at Makerere University’s School of Social Sciences in the department of Social Work and Social Administration is nursing serious injuries after he was allegedly beaten by military police.

Luwangula who got admitted at Mengo hospital in Kampala said that he was beaten on Thursday night after conducting a lecture. He says that after conducting his lecture, he moved towards his office at the School of Social Sciences which just a few metres away.

However, he says he was surprised when three military police soldiers pounced on him and beat into comma using batons. The military police were allegedly at the time disbanding students who had just concluded the final guild rally at the Freedom Square.

“As I left class, I was heading to my office to pack my things and get home. So just in between the lecture theatre or the venue where I taught from called the Central Teaching Facility 1, I meet soldiers (military police),” Dr Luwangula narrates.

He adds “I didn’t know that at the time, they were disbanding students who were from a rally which had been held at the freedom square.”

Luwangula says that three soldiers pounced on him, beating him severely until he lost consciousness. Dr Luwangula says he regained consciousness, he moved down the stairs bleeding profusely and was assisted by his students he'd been teaching and security guards attached to Senaca Security Group.

He said that when he reached the University Hospital, he did not receive any medical attention. He says that he was taken to a nearby clinic where he received the first aid treatment before he was admitted to Mengo hospital. Dr Luwangula questions the interest with which the university management has in the military to warrant its presence at the institution.

“We request management to treat it as an occupational hazard and respond to his safety. We also request council and management to embark on demilitarisation of university spaces and concentrate on active mentorship and training of our students in non-violent methods in their various social and political actions,” Dr Kamunyu said.

Last month, student leaders demanded for the withdrawal of UPDF and military police from the university premises. Makerere guild speaker Isaac Kwagala said he had received complaints of harassment by the military from staff and students.

Here is a man peacefully going about his business trying to earn a living for his family and he is pounced upon by the red-topped goons of the army who are well known for their abundance of brutality but extremely limited common sense!

The increasing reliance on the army on what are ordinarily civil policing responsibilities is not the sign of a democratic state! It is the sign of a dictatorship and a paranoid one at that!
Report to administrator
0 #2 Zzunguluzungulu 2019-03-19 10:39
The Lecturer should pursue the case against the state to expose this unwarranted presence of this goons occupying an institution developing minds not threatening the security of anybody, or does it mean more knowledge is a threat to security?
Report to administrator