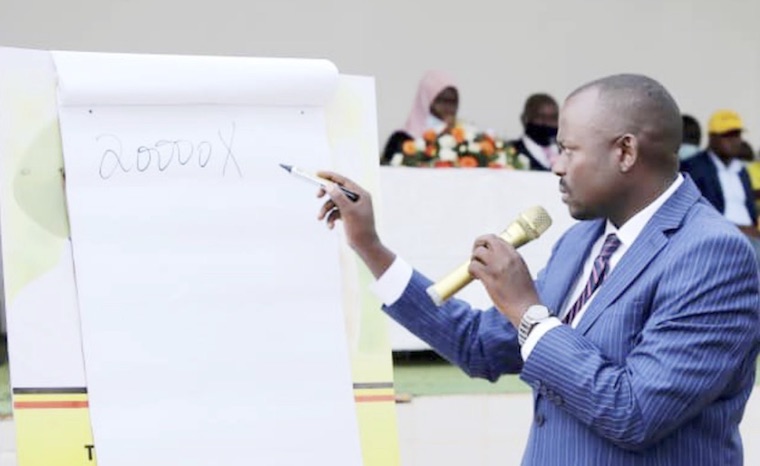 The vision of the third National Development Plan (NDPIII) 2020/21 – 2024/25 is to transform Ugandan society from a peasant to a modern and prosperous country.

At the forefront of this goal is the Emyooga initiative, which has been rolled out to more than 4.3 million Ugandans. A year into its implementation, DERRICK KIYONGA wonders if Emyooga, which is being implemented through the Microfinance Support Centre, is the magic bullet to get Ugandans out of poverty.

Haruna Kasolo Kyeyune, the state minister for Microfinance believes no one can get rich without engaging in business. However, starting a business can sometimes be challenging for some people due to lack of capital. So, to enable people access cheap capital, Kasolo says the government, and President Museveni in particular, has initiated Emyooga programme to enable Ugandans access seed capital and begin their own businesses. Kasolo says he is certain that the program will eradicate poverty since it has been embraced by most Ugandans.

“Emyooga programme is intended to encourage people to save because it’s not true that people don’t earn money. They do but they are not guided on how to save and invest. This programme emphasizes savings through provision of cheap money. So, once people have saved and have capital, they will be able to start their own income-generating activities. They will save more and fight poverty because they will be getting money through their own business activities,” he says.

Launched in August, 2019 by President Yoweri Museveni as a presidential initiative on wealth and job-creation, Emyooga targets Ugandans, especially those in the informal sector who come together in form of Savings and Credit Cooperatives (SACCOs), which are categorised in 18 clusters.

The communities get funding through establishment of various specialized funds/Myooga-specific Apex SACCOs at constituency level but with operations or branches at parish level. However, in Kampala, given the nature of businesses, the area of operation or SACCOs will be within the place of work; for example taxi parks, boda boda stages, markets and offices, among others.

The members must be involved in one of the Emyooga-targeted categories. The minimum number of members in each association is seven, and the maximum is 30. According to Kasolo, in case members exceed 30, the same mwooga would split into other groups of 30 members until all members are fully absorbed in groups of 30.

Although registration of the Myooga Sacco or association is free, each member is required to pay an annual subscription fee of Shs 10,000 and a membership fee of Shs 10,000, making the total Shs 20,000. Kasolo says the government, through the Microfinance Support Center (MSC), availed about Shs 260bn into more than 6,000 SACCOs countrywide.

The programme aims at transforming the 68% of Ugandans who are currently at subsistence level to commercial orientation through savings. According to John Peter Mujuni, the MSC executive director, Emyooga is the sure way to finance productive assets that generate incomes for the poor.

“This is exactly what Emyooga will do. We have learnt lessons from the previous anti-poverty programme, and the design of the Emyooga clearly avoids a repeat of past mistakes,” he says.

The programme targets 18 categories of Ugandans who include boda boda riders, taxi drivers, restaurant operators, welders, market vendors, women entrepreneurs, youth leaders, people with disabilities (PWDs), journalists, performing artists, carpenters, salon operators, tailors, mechanics, produce dealers, veterans, fishermen and elected leaders. Kasolo says that although the money may not be adequate to cater for all Ugandans, priorities have to be made.

“Money will never be enough. Among the qualities of good money is scarcity. So, we don’t have all the money at a go but we have come up with priorities. That is why we were guided by the president and government to start with 18 categories (Emyoogas). They are so many groups that were left out. So, every financial year, we plan to get more money and increase on the score,” he says.

“I believe the other categories will be included on the list in the next financial year because the president has encouraged and directed the ministry of Finance to put more money in Emyooga. So, I suspect that we shall get more money for the other categories. In this financial year (2019-2020), we got Shs 210bn and later we got Shs 50bn for Kampala and Wakiso districts; so, the total budget released is Shs 260bn for the entire country,” he says.

Kasolo says that since the project has just started, it’s still too early to assess its full impact.

“Nonetheless, we have already seen a lot of enthusiasm to form associations and SACCOs. We have also seen increased savings,” he says.

Kasolo says as government, through the ministry of Finance, has advised the beneficiaries not to share this money but, rather, grow it and develop themselves.

“They must be able to use it as cheap capital. The beneficiaries must receive it as a seed, grow it and payback in form of a revolving fund,” Kasolo says.

Asked why the programme was first implanted in a few selected districts, Kasolo says: “As leaders, we are expected to promote universal development. So, we aimed first at the most financially-excluded.”

“So, why begin with Masaka, for instance, and leave out Karamoja? All people are the same and they are all Ugandans. We instead first concentrated on a few categories as a pilot phase. Even selecting a few categories per constituency is a pilot phase because there are so many that were left out. However, after we have succeeded on the current ones, we shall expand the programme. We decided to get people who are doing the same things together. After the success of this pilot project, we shall myoogalise the whole country,” he says.

Kasolo adds that in selecting these groups, his team was guided by the president after his countrywide tour, where he ascertained the need to help these people.

“He guided that we first begin with these few ones that needed urgent attention, then bring on board the rest,” he says. On the question of misuse of the funds, Kasolo says the implementers have brought on board different stakeholders to help monitor the progress of the programme.

“We are working with RDCs and commercial officers. We created taskforces in every district chaired by the RDC. It includes the LC-V chairperson, MP, technical team, and community development officers. I am also engaging the Operation Wealth Creation (OWC) team because these people are in every constituency. Because we are fighting poverty, the OWC must also be involved to monitor and ensure proper progress of the project,” he says.

“We have focused on ensuring that the leaders of SACCOs are well selected. I guided that every SACCO be given Shs 30m. I guided that the money be wired directly to the beneficiaries’ SACCO account. The signatories are clear, not even a single coin will be taken by any other person. So, we shall monitor everything and ensure that there’s no misuse. But we are also here to guide them on how they can properly manage this fund. Sometimes, misuse can also begin with the persons implementing the project,” Kasolo says.

According to MSC deputy executive Director Hellen Petronilla Masika, who is also the focal person for Emyooga programme, the project has so far disbursed a total of Shs 184.9bn to 5,955 Emyooga SACCOs countrywide. “The individual beneficiaries are 4.3 million people and we look forward to benefit at least 10 million Ugandans by 2021,” she says.

0 #1 WADADA rogers 2021-02-23 11:24
It is a campaign project, soon you will hear that it has been disbanded and reverted back to operation wealth creation or NAADS. The employees will be dumped like a hot potato and life continues for the old man
Quote | Report to administrator
Refresh comments list
RSS feed for comments to this post
Add comment