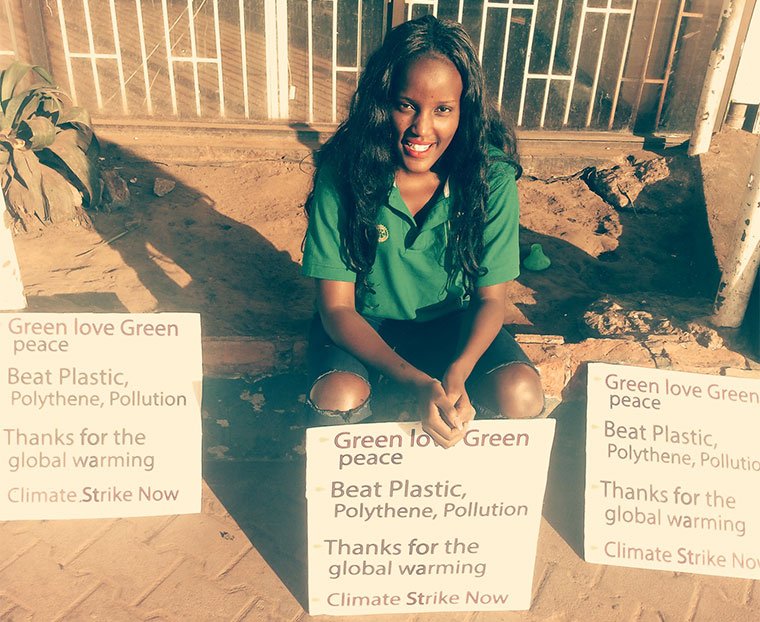 Vanessa Nakate holding one of her climate protests

Speaking live from Kampala, Nakate discussed the lack of diversity in the environmental movement and noted that environmental activism is a privilege. She also said people from Africa cannot, for example, organize strikes and protests the same way Europeans can because of the "politics and how risky it is."

Nakate also addressed the 2020 incident at the World Economic Forum in Davos, Switzerland when the AP cropped her out of a photo with Greta Thunberg and other young white European climate activists.

Amjad Atallah, managing director of Doha Debates, said, "With the Black Lives Matter movement in the United States resonating among people around the world, it's clear racial injustice is pervasive and problematic on a global scale. Now is an ideal time for #DearWorldLive to devote a series of thoughtful, engaging programs to the question of how we can overcome racism."

To me, personally, environmental racism is me trying to tell my story and other fellow climate activists in my country [of Uganda] – to talk about issues that are disproportionately impacting our lives. And yet we're continuously being erased from the climate movement.

I was cropped [out of the photo in Davos] because of the history of excluding and erasing Black people from leading ecology movements. I think the climate movement has been idealized to be led by only white activists.

We have seen people of colour leading ecology movements from way back. So this is a history of continuous erasure of Black voices, in the leadership of these movements. That is why I think I was cropped out.

Nakate on how environmental activism is different in Africa

This makes environmental activism a privilege for other people. It is hard for people to be sustainable if they do not have alternatives. Some communities are trapped in systems they cannot get out of.

If we do not include the issue of environmental racism in the environmental movement, then we cannot have the justice that we are looking for...When you come to the global south, it is the least contributor to the climate crisis especially countries in Africa but they are the most affected by climate change.

We know the historical events that brought about the climate crisis, from colonialism to imperialism and exploitation, to communities in countries like mine. Many children have to sleep hungry because their families have lost everything to climate change. Many girls have to skip school, they have to drop out of school, because their parents cannot take care of them.

On balancing the needs of the economy versus environmental activism: