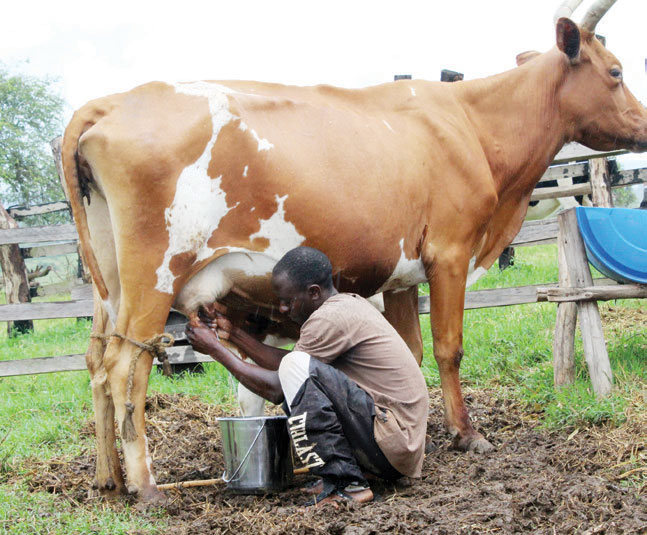 A dairy farmer milks a cow. The fall of milk prices could have an adverse effect on dairy farming

It is calf feeding time at Elizabeth Ndyabagye’s farm in Mbarara. In their paddock, the calves munch on the forage mixed with supplements, including molasses.

“We also feed them using the bucket system,” she said. “We measure their height, weight and tag them to track their growth.”

By any measure, Ndyabagye is a portrait of Uganda’s dairy sector success story. She has an established modern farm, Rushasha farm; adopted modern calf management; and upped her milk production to 170 litres a day, from slightly above 50 litres three years ago.

“I was a cattle keeper,” she said of her past. “I am now a cattle farmer doing commercial farming.”

Uganda’s dairy sector has seen tremendous transformation and growth in a space of 20 years. Researchers at the Economic Policy Research Centre, a think tank at Makerere University, found that milk production had grown from 338m litres a year in 1990 to two billion litres last year.

Many farmers who kept the long-horned Ankole cattle for prestige and culture turned to exotic and Friesian to boost production and make some money. At least 918,000 cows in Uganda are exotic while 13.4 million are indigenous, says Uganda Bureau of Statistics. With this transformation, the sector attracted big processors such as Pearl Dairy, the producers of Lato Milk; Fresh Dairy, affiliated to Kenya’s Brookside; and Mulwana group’s Jesa Dairy.

The other smaller players dot much of western Uganda. This meant income for the farmers and jobs for the locals. This transformation, however, faces its biggest test – the sustained fall in milk prices.

Ndyabagye says it is “[now] expensive to give supplement feeds to the calves and with milk prices this low, it is not sustainable.”

The fall in prices coincided with the sharp rise in milk production in Kenya, a key market for Uganda. Pearl Dairy Ltd and Fresh Dairy are key exporters of Ugandan milk to Kenya. The Kenya Dairy Board reports that the country’s milk production moved up from 41 million litres in May to an average of 60 million litres a month.

“Local production has also increased. Dairy farmers in Mbarara who used to get three litres per cow now average seven to 10 litres per cow per day. They have the capacity to go up to between 15 and 20 litres per cow a day,” said Dr. P. Kannathasan, the dairy development manager for Pearl Dairy.

Several incentives pushed up farmers’ milk production – one being ready-market from processors whose total installed capacity is 2.7 million litres a day. There have been several interventions by processors and NGOs to boost milk production. For instance, Pearl Dairy Farms Ltd paid dairy extension workers to stay at the different farmers’ farms to help them set up silage bunkers, pasture growth, and calf management.

SNV, a Dutch not-for-profit organisation, influenced the drop in interest rates in several Saccos in western Uganda and dairy farmers were able to access loans to put up infrastructure, including water tanks on their farms.

But as production increased, the desire to consume milk hasn’t matched up. Ugandans consume up to 62 litres per person a year, a low intake compared to the 90 litres per person per year recommended by the World Health Organisation.

Amidst this, farmers face up to an uncertain future. Ndyabagye has cut the amount of milk she gives to the processor and resorted to selling to individuals who make things like yoghurt on their own. These pay a higher price than processors because they are not subjected to an 18 per cent Value Added Tax charge.

Boaz Barigye, a farmer in Lyantonde, has suspended plans to take up a loan to put up a water system that would allow for the irrigation of the farm when it’s a dry season.

“It is still uncertain for me to take a loan,” he said. Barigye, whose daily milk production is up to 300 litres, has seen his income drop to Shs 3m from Shs 5m he earned last year.

The crisis might force some farmers to abandon milk production. Barigye said some of his colleagues are pondering crossing to beef cattle.

Joseph Kiirya, the investment adviser for SNV, said there was need for a study to ascertain the exact cost of milk production in Uganda. This would give a sense of how much farmers are losing in this period. President Museveni told farmers recently that he secured market in China for their milk, but this may take a while before litres of white stuff can be shipped there.

“We have to ensure that we organize ourselves better and churn out high-quality products to access those international markets,” he told farmers in Mbarara recently.

Steven Aikiriza, the dairy manager at the National Dairy Development Board, said while the price fall was temporary, farmers can try supply contracts with processors where they hedge their supplies at a particular price for a particular period.

Insurance would be another option where a farmer can buy a policy that lowers the risk of price volatility. Lastly, but also more radical, is that farmers can intentionally cut down on milk production until prices recover. When global milk prices fell in 2017 due to low uptake in China, farmers in the EU and New Zealand were asked to lower production but their governments compensated them.

Uganda government might have to dip into the purse and pay farmers for losses incurred if asked to cut production.

0 #1 Empayippayi 2019-11-15 15:06
The suggestion of government subsidy is good. However, when the price of maize drastically fell, the government never intervened to stabilize the situation by subsidizing farmers. Why should they do it for milk producers?
Report to administrator