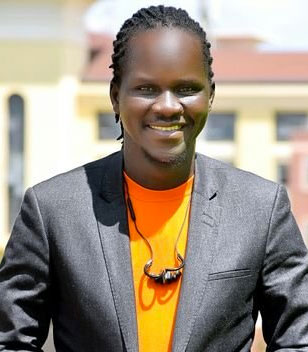 What started as a business experiment to ensure safety of boda boda riders has grown to become a big business in Kampala and beyond, influencing the lives of thousands. Simon Rasmussen talked to RICKY RAPA THOMSON, one of the brains behind Safeboda.

When Ricky Rapa Thomson was eking out a living as a boda boda rider, he lost a dear friend in a motorcycle accident. He had come to Kampala alone, with no relatives or close ones; so, the loss of his friend and colleague was hard to take in. He decided something needed to change.

Thomson started carrying an extra helmet and got in to touch with other boda boda riders, that started doing what he was doing. Today, that idea is turned into a company with close to 200 employees, more than 8,500 boda riders, and business in two countries – and it’s called Safeboda.

“I witnessed things that any other person in the industry would have also seen. And among these things, was the loss of a very good friend in a boda boda related accident. He was someone I used to work with so closely, he used to help me make money, we used to do business, and once I lost him, I realized something needed to be done,” Thomson said during an interview at the Safeboda headquarters in Bukoto.

But the journey from the humble beginning wasn’t always straightforward.

The creation of Safeboda

Thomson is the co-founder of Safeboda, together with Maxime Dieudonne and Alastair Sussock. He and Dieudonne met when Thomson was still just a boda boda rider with a good idea.

It was Dieudonne who came up with the idea of creating an app for the service and brought along his friend Alastair, who he met while working in Rwanda.

“Basically the app idea was mentioned by Maxine. He talked about a company that was doing this for taxis in the USA. I didn’t know the company. He told me about the app and I really didn’t know how that would work,” Thomson says.

The Safeboda operations started officially in 2015, but the company would spend almost two years before they came up with the right app.

“We had three versions of the app. They went out on the market but with time we realized that they were not to a standard we wanted. For example, in the first version, you would have a list of Safebodas, and you would just have to pick one you would want to come and get you. It wasn’t like ‘Who is the closest person?’” says Damalie Wasukira, the communications manager at Safeboda.

Wasukira and Thomson met when Thomson was working as a security guard at a Makerere University hostel, where Wasukira was living.

She continues; “We reached a point where GPS became such a challenge to use; so, we created the next version of the app linked to a call center. You would request, and it would go to a call center that would then manually dispatch a driver.”

Still, it wasn’t easy to understand for customers and the app was ultimately dismissed in favour of the current one, which was launched in February 2017, where GPS was integrated and the drivers were given smartphones. 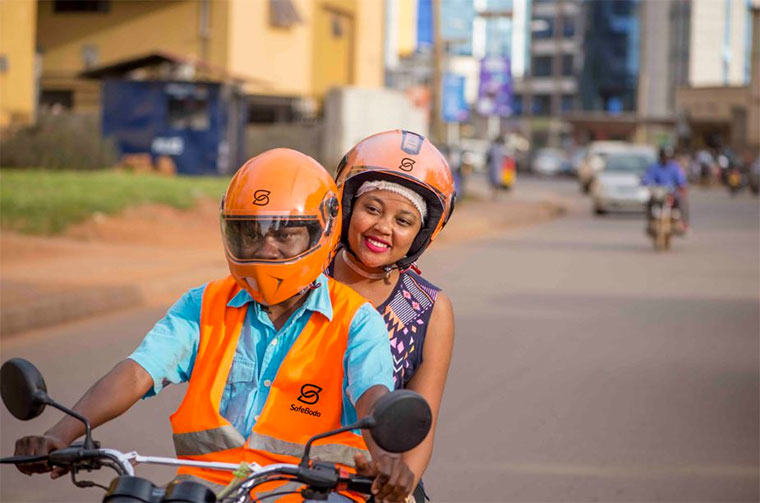 Safeboda drivers usually earn 30 per cent more than regular boda bodas, even though the prices are fixed, because it is faster for them to get new customers through the app.

“What we are trying to do is to maximize the time of our drivers. So, the price that you pay when you are using a non-safe boda is the price of the driver to take you from where you are to your destination and for him to ride back to his stage and wait for another customer. Safebodas don’t need to do that. We take you to your destination, and we come back with another person,” Thomson explains.

Meanwhile, Safeboda riders are also forced to save some of their money, because the money from the rides paid with credit is only given to them at the end of the week. At first, it was hard to explain the concept to boda boda riders, but after the first few months, it was easy to get them to join. In order to join Safeboda, one needs to fulfill a few requirements.

“You need to have been in the industry for three years, you need a stage and a valid national ID, and you need to be willing to attend an interview to see if you are fit to join the community,” Thomson said.

Wasukira continues: “Background checks are done. We go to your stage and ask; ‘who is this person?’ Ideally, we go to the stage chairman.”

Additionally, you have to pay Shs 450,000. This includes all the training, two helmets, a smartphone and two vests.

“The thing is; it’s a package that they pay to join the community. They do not pay physically for the training, they pay for the equipment, like two helmets, a smartphone, two vests and so on. At the moment it’s a total of Shs 450,000,” Thomson says.

When you are part of the Safeboda community, you have access to be on the app, and also to get assistance from Safeboda mechanics. These go straight to the riders’ location when a rider’s boda boda breaks down. The parts are bought by the riders, but the repairing is totally free.

In March, a UN report showed that 10 people die daily in Uganda due to traffic accidents while boda boda related accidents account for the highest number of victims. Generally, traffic accidents cost the country Shs 4.4 trillion every year.

Safeboda is trying to change this by enforcing road safety by ensuring their drivers adhere to traffic laws and promote helmet-wearing and visibility in traffic.

“We have never witnessed any fatal accidents and we are very proud of that. What we really have seen is a big change in the minds of the people, and that is the beginning of road safety,” Thomson says.

Safeboda has also transformed the mindset of boda boda riders and their relations with customers. 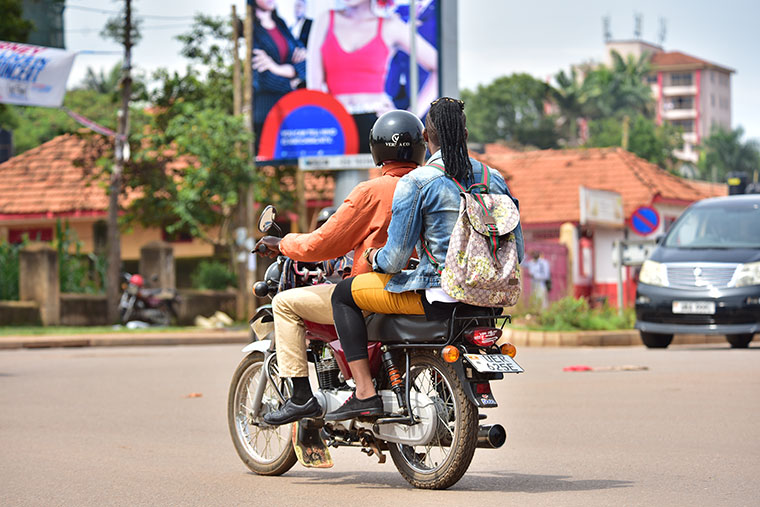 A lot of the accidents happen when boda bodas don’t stop at traffic lights. They cross for a red-light and gets hit by a car or another boda boda from the other lane.

Safebodas are trained to help in case of an accident and will stop to assist whenever there is one.

The focus on safety has paid off and today, Safeboda has trouble following up on the high demand by customers.

“We have so many customers, who are looking for us every single day, especially during the weekdays. I am even tempted to say the demand is 10 times the number of riders that we have,” Thomson said.

How life has changed

When Thomson came to Kampala, he knew no one. He joined the boda boda industry because he needed to survive even though he understood the risk of riding boda bodas.

“When I joined the boda boda industry, it was really about survival. It was good because I used to get good money. But it was risky, and I had no one to speak too. I was really by myself,” he says.

But after starting Safeboda, his life has changed.

Last year, he travelled to Sweden for leadership training because of the company and is planning to go back and study at the university.

“I have travelled to different countries because of Safeboda. And I am also going back to school to study a degree in business administration, mainly in small-scale business and entrepreneurship,” Thomson says.

Safeboda has changed his life for the better, while also transforming road safety in Kampala and, soon, also in Nairobi.

“When I started Safeboda, business was very slow but my life is not the same. I am very happy, I have hope for life. I want to live longer, and I want to do better things,” he says.