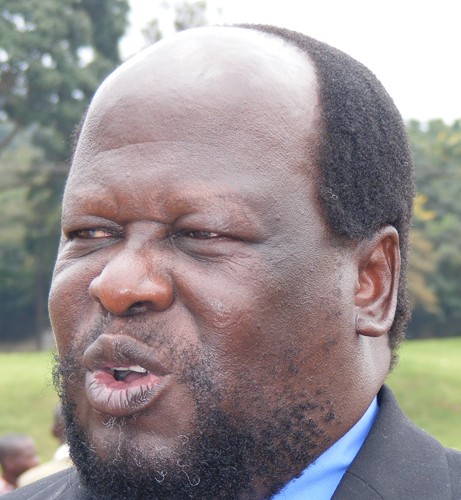 One cannot say much about Umeme bribery, given claims that Shs 5.2 million was doled out to MPs on the Energy committee (Graft: How MPs receive 'bribes').

Allegations that MPs were bribed to promote the biotech bill, claims even directed at objective scientists, however, are nothing but blatant blackmail by anti-GMO campaigners.

At a recent workshop, the executive director of “pro-biodiversity conservationists Uganda” reportedly accused MPs on the Science and Technology committee of taking bribes to support the biotech bill.

He, however, withdrew his claim when threatened with court action by MP Waira Majegere.

Earlier, a Makerere University scientist, Dr Gregory Olupot, was also forced to withdraw similar claim of bribery made before the Science and Technology committee for lack of proof (see Anti-GM activist forced to drop bribery allegations against MPs, The Sunrise, 28 October 2013).

The truth is that allegations of bribery are not new. The problem is that, when opposing the biotech bill, anti-GMO campaigners offer no scientific proof of the dangers of GMOs. Instead, they hide in claims of protecting seed interests of our farmers, and allege bribery to divert.

Earlier, I rebutted claims by Prof Peter Kanyandago (Uganda Martyrs University) of unresolved “health, scientific and environmental questions” associated with GMOs, and his outlandish and deliberately scary assertion that “through genetic modification, one can grow cabbage on the ear of a rabbit” (Can GMOs achieve food sovereignty for Uganda? The Daily Monitor, 2 September 2013). Regrettably, this rebuttal was not published.

To add scientific weight to his claims, Prof Kanyandago even referred readers to publications by avowed anti-GMO campaigners, professors Arpad Pustzai and Gilles-Eric Seralini, whose false claims that GMO crops harm humans have been thoroughly discredited scientifically and are now derisorily referred to as the ‘Pustzai” and “Seralini” affairs.

In his supposed study of Monsanto’s “Roundup Ready” GM maize, published in 2012 and considered the bible of anti-GMO propagandists, Prof Seralini deliberately used ‘Sprague-Dawley” rats that naturally develop cancer (up to 80 per cent) and die off within two years, then claimed that their deaths were caused by the GMO maize.

Thankfully, the journal that published this paper recently disgracefully withdrew this falsehood. On claims by anti-biotech campaigners that GMO use will deprive our farmers of own seed supply, again there is not basis at all.

Firstly, Monsanto’s commercial interest in GM crops is centred on Bt cotton and “Roundup Ready” soybean and maize. Bt cotton is extensively grown worldwide, including South Africa and Burkina Faso, but is not a food crop and farmers do not save own seeds.

For GM maize and soybean, our seed market is too small and of little interest to Monsanto and other GM seed producers. Anti-GMO campaigners also conveniently ignore the fact that successful commercial maize producers have for long been using non-GM hybrid seeds that must be repeatedly bought, while peasants use own saved open-pollinated seeds.

These are self-pollinating, with bananas vegetatively propagated, which means that farmers can save and use seeds of genetically-improved varieties without repeated buying. When our scientists genetically modify these crops using biotechnology, they will be freely available to our people.

Lastly, those who propagate the crazy idea that peasant agriculture must be preserved and protected are real enemies of our people and country. In this modern, technology-driven world, peasantry does not pay and is not sustainable, and, in a high-cost oil economy, peasants, as happened in Nigeria, Gabon, etc, will abandon subsistence farming to chase oil money.

With our high population growth and being landlocked, how will we feed our country if we do not embrace profitable technology-driven agriculture?

How will we rapidly respond to the vagaries of climate change and attendant environmental and pestilence challenges without use of biotechnology? How will we effectively use biotechnology without the biosafety measures provided for in the bill?

And when will we trust and respect the guidance of our scientists on such technical matters?

Let us end absurd propaganda and allow passage of the biotech bill for the good of our country and people.

The author is a former leader of opposition, 8th Parliament.

The author is the president, National Taxpayers Protection Organisation (NTAPO). 0712268924