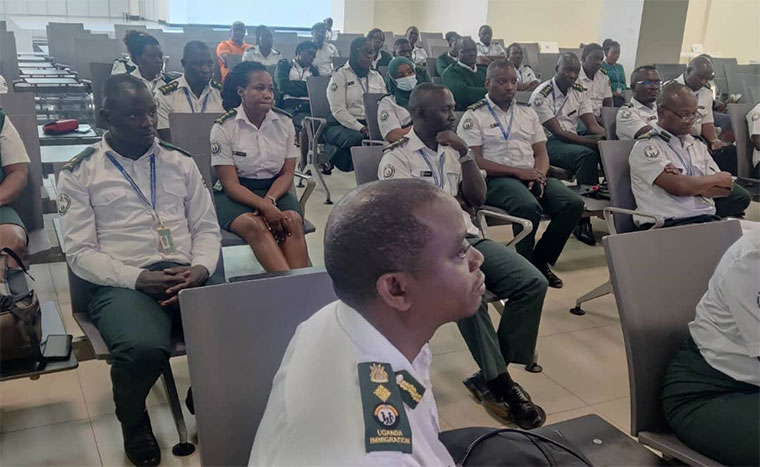 Immigration officials at Entebbe airport have been accused of extortion

I am told of a king who, one time, perhaps under the influence of boredom, set out to prove to his primitive people how high he could urinate.

Indeed, he peed quite high for every lunatic’s excitement and wild ululation. To really feel the effect of his performance on his people, he turned round and round nodding to his own act. But the urine could not defy the law of gravity. It soon came back where it belonged. Wet and soaked in embarrassment, the king walked back into his palace.

Of course the ululating audience was drenched in bladder content too. The story is not far from us. We have been peed on as some of us sing in praises for the peeing king, because they benefit in one way or the other. A glutton’s primary responsibility is to his/her tummy. What happens to others as he/she feeds isn’t his/her business.

Yet, even if we are too selfish as to only care about ourselves, as I have repeatedly said here, ultimately no one will run away from the consequences of the broken society we have created. It is just a matter of time; everyone will feel the urine.

We cannot run away from the consequences of the corruption that we have boldly sowed in full view of our children – to the extent that it is difficult to single out any entity that is still safe from the vice. Should we blame them for growing up with a mindset that everything involving human beings can be bought?

Should we blame them for taking advantage of every opportunity to exploit others and make quick money? Should we scold them for the mindset that ‘values’ are an outdated thing? Should we be shocked when they sternly ask us if integrity can be eaten?

Haven’t we showed them by deeds that ‘eating’ is what we live for, that it is the highest purpose of a human being? Haven’t we demonstrated to them that our aim wherever we find ourselves should be to accumulate by hook or crook?

Much of what we are constantly making noise about in our country’s steady supply of scandals are just symptoms of a broken society, broken to the core of what matters most. The Entebbe airport extortion stories, the NSSF bewildering revelations, the exploitation by schools, gory tales of kidnap and torture, name it.

They are small signs of the monster that we have helped to hatch, grow and survive. Either by commission or selfish silence, many of us have been complicit in permitting corruption to eat up our society. It is not by accident that we now expect to meet thieves; from the streets, to the gateman, to the highest office – disguised under different euphemisms (corruption, bribery, embezzlement, fraud, etc).

We can’t do all that can only produce a corrupt society and pretend to be shocked when we see the outcomes. I have had students come to me to ask if there is anything they can do to pass exams or sort a retake - brazenly! They haven’t acquired this attitude suddenly.

They are part of an ecosystem of corruption right from the family, to schools, to social spaces, and to political examples. When leaders start buying off people, and the procured lot even show off with bundles of money, a transactional society is being cemented.

The message is that it is always okay to use money to buy whatever and whoever you need. Everything and everyone has a price, and it is okay to sell or buy anything we can - no values should stand in our way. When we fill job positions with relatives, in-laws, friends, and tribemates, what do we expect as a result?

There is a multiplier effect to this, whereby even those below us will use their powers to bring in theirs. Before we know it, we have workplaces and bodies that operate like clans - where everyone feels that it’s their duty to protect the other, even in their incompetence.

With conflict of interest shelved, merit hardly matters. Those are the hot-headed ladies and boys we find steaming with primitive arrogance in offices where they know they can hardly be touched. If it’s not their excellence that earned them the job; why should they care being excellent? Even if they engage in corruption, they trust the security of their networks.

Meanwhile, highly talented people with no connections wallow in frustration and end up either leaving the country or staying as bar hoppers. If they are lucky to find jobs, they still find themselves under the supervision of the incompetent connected lot.

In the long run, we all pay through poor services, institutional decay, and life-threatening risks. One of the most glaring of the institutional ills that have emboldened workers into untold impunity is tribalism.

Many of us speak about it in coded language, jokes or whispers, but this is a matter that is likely to create long-lasting ethnic rivalry and conflicts. People may act dumb, but they see the extent to which certain parts of the country have unfairly entrenched themselves everywhere while marginalising others.

People from other parts of the country are not underrepresented because of being short of talent or brains. Neither are they lazy or uneducated.

Some have been made to think that they have a higher claim to the country and its resources, and that no one has a right to fault them. Condemnation of tribalism has thus been criminalised. Meanwhile, the entitled ones get so emboldened as to believe that even stealing from others is their right.

Privilege often has a blinding effect. The cries of the rest of the country are only seen to be grumpiness, interference and ungratefulness. Should corruption shock us anymore? Will anyone survive its outcomes? Shall we progress as a country like this?

It appears there is no state...but a construct called Uganda.. from which people extract in peprepation for their return home. ...

The relationship between Central and the rest of Uganda remains colonial. Otherwise, how else can we explain the venom we see in the body language of the head of state whenever he refers to Buganda.

Hank, we are under a vicious Domestic Colonialism.

1. Why does Gen Tibuhaburwa want to ring-fence off the Coffee Industry for the Pinetti of Italy?

2. Why is there vicious land-grabbing?

3. Why is there Segregation, employment and in the delivery public services like education and health?

It is however our duty as the citizenry to ensure that one of the answers to those questions is a yes. Short of that, the pearl is Africa will remain under free fall.

What a pitty, Ugandans are just helping, watching their land becoming property of foreigners & they will be foever slaves!
Report to administrator
0 #16 Akot 2023-01-30 19:08
Remase, thanks.

Ugandans MUST say NO to the tribalistic system of rule M7 so cleaverly put in place & UNITE to block & show him way out, NOW!

Why wait for next fake elections that will ensure M7's 45 years in power?

All self styled lifetime rulers; Museveni, Kagame, Jinping, Putin, Erdogan...don't care about humans & they treat them as objects!

Why are tribal leaders still in posts helping M7 sell of Uganda, when NO to the tribalistic system & UNITY will end M7's hold on our land & give chance to formation of the kind of governance we want, even independent tribal states?

Why are Ugandans ensuring they end up landless slaves, unwanted elements on land that is theirs by right of birth?

Mutebi MUST stop helping Museveni own Uganda in which Buganda is part & partial of it & won't be left FREE land by Museveni, never!

But of course, all tribal leaders far from Kampala/Entebbe will also be erased immediately Museveni is assured of ownership of Uganda!

Didn't Museveni, 3 years ago, try to make Acholiland his military/police base?

Every tribe, including Buganda, are POWERLESS lonely, but UNITY is the strength Ugandans need to say NO to migrant Museveni!

Why keep Museveni on when FREDOM will give chance, in peace, to formation of the kind of givernance Ugandans want?

Why are Ugandans helping, ensuring they are the LANDLESS unwanted migrants?

What is wrong with Ugandans?
Report to administrator
12