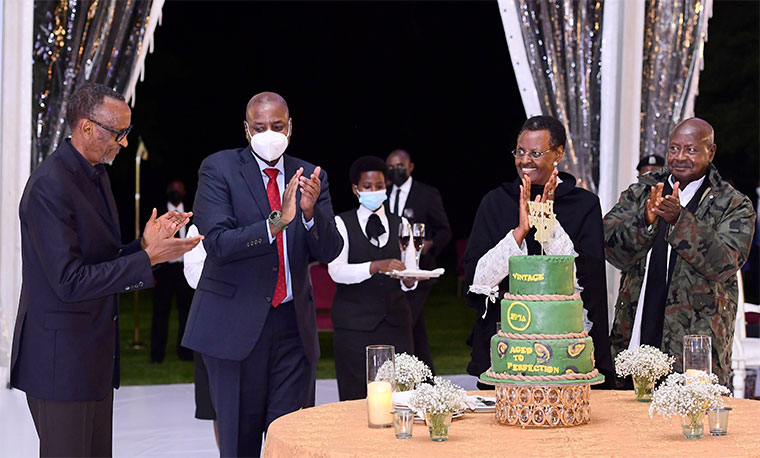 To someone who is not well-acquainted with Uganda’s politics, the impression is that President Yoweri Kaguta Museveni and his son, Muhoozi Kainerugaba, are in a race for the presidency in 2026. Against each other.

The two are mobilising with almost the same vigour, on the same scale and exactly for the same presidential term, 2026-2031. In October of this year alone, youth in Rukiga, Buganda, Teso and Greater Mpigi endorsed Gen Museveni for presidency, 2026-2031.

On November 2 this year, The New Vision reported that the first national vice chairperson of the National Resistance Movement (NRM), Moses Kigongo, endorsed the incumbent, President Museveni, for presidency, 2026-2031.

“President Yoweri Museveni’s track record is evident enough to show that he is still the best striker with visionary leadership and has our interests at heart. This is, therefore, why he is endorsed to lead our party and country over and over again,” the newspaper quoted Hajji Kigongo.

Kigongo said the words on November 1 during the launch of the 2026 Museveni presidential drive, dubbed ‘Omalako Jajja Tova ku Main.’ On October 30, in Isingiro district, on an event that was attended by Museveni’s young brother and paternal uncle to Muhoozi Kainerugaba, Michael Nuwagira alias Toyota, the youths endorsed Muhoozi for presidency, 2026-2031.

During Muhoozi’s nation-wide birthday celebrations, it was not uncommon to see youths donning shirts and other paraphernalia bearing messages endorsing Muhoozi for presidency, 2026-2031.

Even today, youths on the streets of Kampala, boda boda riders, street vendors etc. still put on T-shirts, jumpers, caps etc. with messages endorsing Muhoozi for presidency in 2026. On November 11, 2022, the MK Army organised an event at Uganda Museum at which the new leadership of MK Army was elected.

The event was attended by some notable faces - Frank Gashumba; Lawrence Muganga, the vice chancellor of Victoria University, Michael Mawanda, the member of parliament for Igara East; events promoter Balaam Barugahara and other Ugandans from different regions of the country. MK Army’s cardinal objective is to mobilize political support for Muhoozi towards 2026.

A spectator who doesn’t understand our politics well might get a false impression that Muhoozi is in a race for power against his father. Whereas Muhoozi is a Ugandan who has a right to harbour and pursue presidential ambitions, the reality is that Museveni can frustrate his ambitions if he (Museveni) so wishes.

The fact that Muhoozi, a serving military officer, engages in partisan-politics-talk with impunity proves that Museveni isn’t keen on stopping his mobilisations. Further still, the comments Museveni made during Muhoozi’s birthday dinner held at Entebbe this year speak volumes.

He said: “I am patient with corruption but Muhoozi isn’t. He will fight corruption.” It is almost lucid that Museveni consented and most probably still consents to Muhoozi’s political mobilisations.

But if the state can consistently supress activities of other major opposition political parties with the determination it has demonstrated in the last three years, the impression that the presidency in 2026 is about Museveni and his son will become stronger in the eyes of ordinary voters.

The supression will strategically and gradually eliminate Robert Kyagulanyi Ssentamu, Museveni’s main opponent and Muhoozi’s perceived future main opponent, and other major political opposition players from the game because politics is largely a game of perception.

When the options are reduced to two -- Museveni and the son -- the dynasty idea, with a republic coating, will become more viable in Uganda.

The author is a Ugandan citizen.

+2 #1 Lakwena 2022-11-24 11:53
Moses Baguma, after "swearing (calling) the name of the Lord in vain", and not respecting, protecting and defending the law of the land (constitution- Social Contract) Gen Tibuhaburwa and his son, Lunch Corporal Muhoozi Kainerugaba are committing treason with impunity.

In other words, who in his/her state of mind can still deny that the Principals in First Family: Gen Tibuhaburwa and his son Muhoozi are unrestrained criminals (capital offenders)?
Report to administrator
+2 #2 Lysol 2022-11-25 00:20
The spoiled soft belly brat his being pushed by his uncle, Mr Pencil-thin and his mom to take over from his senile old dad.
Report to administrator
+2 #3 Zaitun 2022-11-26 16:43
[quote name=[MOSES BAGUMA] He said: “I am patient with corruption but Muhoozi isn’t. He will fight corruption."
It is nott that he is patient with corruption; but is swims in corruption and is covered with corruption from the head to toes just like his family, brothers, sisters, friends and those who support him are!.

If his son was not corrupt, how come he has failed to bring him to book? Let these devils leave Ugandans at least breath in peace, or they risk polluting the only thing we are left with in this country, the air we breath.
They will one day learn to bevahe in a hard way, God willing!

It's Ugandans ensuring the devils posts, ownership of their land through the divisive tribalistic system & fake elections!

NO to the tribalistic system & UNITY will show the devils way out, then Ugandans will have to form the kind of governance they want!

Why are tribal leaders still in posts ensuring tribal allegiency/division, when UNITY will give chance to even formation of independent tribal states, without war?

Why are Ugandans ensuring they are slaves of migrant Museveni in the zone formed by their tribal lands when Museveni has non in it?

What is wrong with Ugandans?
Report to administrator
0 #5 kabayekka 2022-11-27 14:17
One would think that those with constitutional brains in this country would enact an electoral law so that current democratic presidential ambitions are spread out in all the different provinces that formulated the State of Uganda.

The Kingdom state of Ganda that must determine the next president of this country should come out and emphasize this sort of political process where several presidents of this country of Uganda must all come from the same province now 36 years and counting. To keep quiet over this very important political matter and African culture, the King of Buganda and His honorable regional government do so at their own peril.

It is wrong to hide like an ostrich with its head in the sand and think that the political Ganda problems will automatically disappear for ever! Problems will only continue to increase tenfold.
Report to administrator
0 #6 Akot 2022-11-27 14:25
Ugandans,

NO to the tribalistic system, then UNITY will block & show Museveni & family way out!

Why are the 2 actions need to get rid of the evil family, not coming?

Why hold on to Museveni by all means;

- those in posts serve Museveni to ensure their pays!

Powerless tribally divided Ugandans are slaves of the migrant family, in the zone formed by their tribal lands & Museveni owns tax money, controls every institution, WHY?
Report to administrator