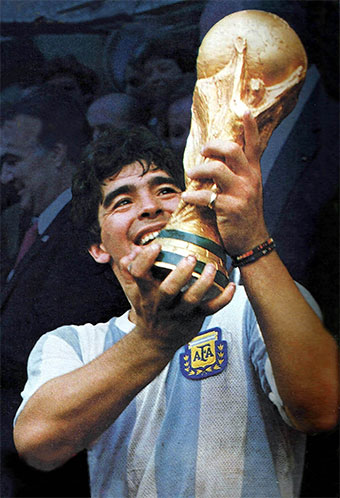 Diego Maradona has been a factor at every Fifa World Cup for the last 42 years.

Back in 1978, Argentina’s chain-smoking coach Luis Cesar Menotti controversially dropped the prodigious 18-year-old on grounds that he was still not ready for the greatest stage in world sport. The following year, Menotti led Argentina to victory in the World Youth Championship in Japan with Maradona as the star of the show.

In 1982, Maradona was an integral part of Argentina’s World Cup squad that featured stars like Ossie Ardiles, Ubaldo Fillol, Daniel Passarella and Mario Kempes, among others. Maradona would be sent off for retaliation in a knockout game against rivals Brazil.

This meant that his first World Cup appearance ended in a dismal fashion. Four years later, Maradona would redeem himself with arguably the most dominant performance by an individual at the tournament.

He single-handedly carried Argentina to the finals, scoring five goals and creating as many including classic strikes in the quarterfinals and semi-finals against England and Belgium respectively.

No player has written his name on the competition in a similar manner since, At Italia 90, Maradona’s powers had started to fade but he still dragged an average Argentina side to the final where they lost to Germany.

In 1994 in the USA, the biggest story of the tournament was Maradona being banned by Fifa for a failed doping test. He had steered Argentina to victories over Greece and Nigeria but once he was banned, out went his country’s chances of reaching a third final in eight years. Since then, Maradona’s name has hovered over every competition.

Today’s generation mostly belongs to people who either watched Maradona or grew up idolising him in an era when television transcended the game of football. Pele may have won more World Cups but his career and life hasn’t quite captivated the post-80s generation the way Maradona’s controversial story, awash with as many highs and lows, did.

I can’t forget how Maradona caused a pandemonium at South Africa 2010. Wherever he appeared, there was a multitude of followers who wanted to get a piece of him. Maradona is gone but his spectre lives large. Those are the big shoes that the world’s best footballer of his era Lionel Messi has been struggling to emulate for the last four World Cups.