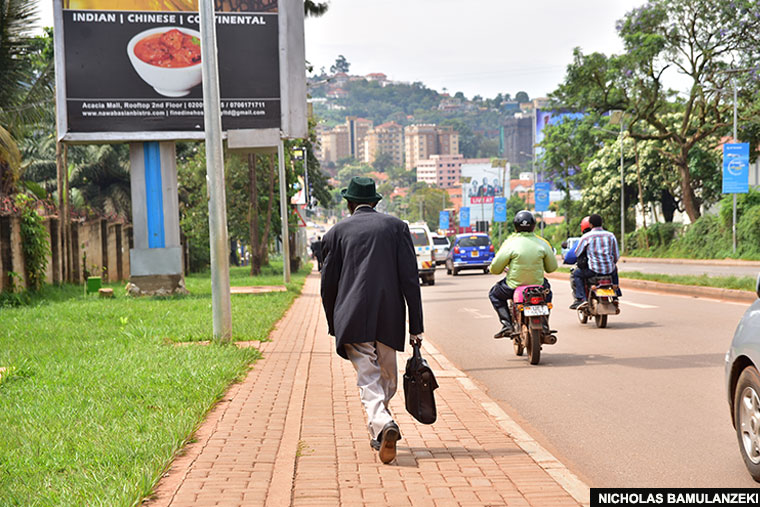 David Mulongo is one of the routine shoe hawkers along Jinja road, Nile Avenue and mostly the Old Port Bell road in Kampala city, Uganda's Capital.

He is usually loaded with different pairs of shoes, with some in a big bag, weighing many kilograms on his back. I have seen and talked to Mulongo almost every morning as I get to work for the so many years that I have worked in Kampala.

Last week, I bumped into him with his merchandise, and we had a chat on business and the current state of the economy. What Mulongo told me in Luganda “Muzeeyi, nina ebyakabi naye teri agula. Buli omu akaaba economy. Naye tujja kulemerako” loosely translated into “mzee, I have very amazing stuff [shoes] but nobody is buying these days. All customers keep saying that the economy is rough, but we will not give up. Let’s keep persevering”.

Mulongo’s statement was one that best describes the hurdles we are experiencing amidst low demand, which has been occasioned by diminished purchasing power as commodity prices shoot through the roof. The cost of living or what one would call the price we pay for items that sustain us is becoming unaffordable by the day.

What Mulongo shares is a story and experience that in real terms breaks down the effects of the current economic hardships that the population is facing globally. The word ‘economy’ has never been this popular amongst not just Ugandans but other people across the globe. The last time it came close to this was when the minister of Finance, Planning and Economic Development, Matia Kasaija said ‘Uganda’s economy is swiiiiiiiii.......’, meaning that our economy was at take-off.

“High inflation is akin to a thief that cuts your pockets stealthily as you squeeze your way through the crowds in downtown Kampala. Inflation erodes money’s purchasing power, thereby retarding long-term planning, savings and investment. I dare say that the worst enemy to the underlying objective of helping people save and invest for their goals is inflation,” Atingi-Ego remarked.

Uganda’s inflation has recently increased yet projections indicate that it will exceed the target of the average annual core inflation of five per cent. Inflation levels above the five per cent target retard economic growth.

Uganda’s central bank says the inflation that spiked recently on the back of external factors and drought, would be tamed through initiatives like increasing the Central Bank Rate (CBR) and enhanced monetary tightening by raising the cash reserve requirements for commercial banks to 10 per cent.

The central bank has indicated on many occasions that it is prepared to do whatever it takes to restore inflation to low and stable levels in line with maintaining macroeconomic stability.

“Restoring inflation to the five per cent target over the medium term (two to three years ahead) is our primary job, and we are committed to doing it, come rain or shine,” remarked Atingi-Ego recently.

Experts say that the fact that supply shortages caused the recent spike in prices due to the Covid-19 pandemic, the Russia-Ukraine war, and drought implies that inflation can be reduced sooner if the availability of consumer goods and services improves as quickly as possible.

The economy might be rough as per Mulongo’s experience and that of many others, but the magic is in perseverance. Life is a game that requires us to focus. We must adapt by cutting back on the things that we can do without for now and focus on the must-haves to be able to navigate the hard economic times. We need to master the game of numbers!

In tougher times such as these, we could look inwards and check on our financial valves. It could be managing our utilities better.

For instance, switching off the lights during the day or when moving out of the house/room; using energy-saving appliances to reduce on electricity bills; turning off the tap once the wash basin has filled with water; and possibly limiting the conversations on the telephone. Keep your eyes on all expenses!

The author is the head of communications, Umeme Limited.

+1 #1 WADADA rogers 2022-09-22 14:43
I agree, the direction Uganda is taking is "Opaque" . Starting November, 2022 to the whole of the year 2023, we are going to experience one of the worst economic conditions like never before
Quote | Report to administrator
Refresh comments list
RSS feed for comments to this post
Add comment