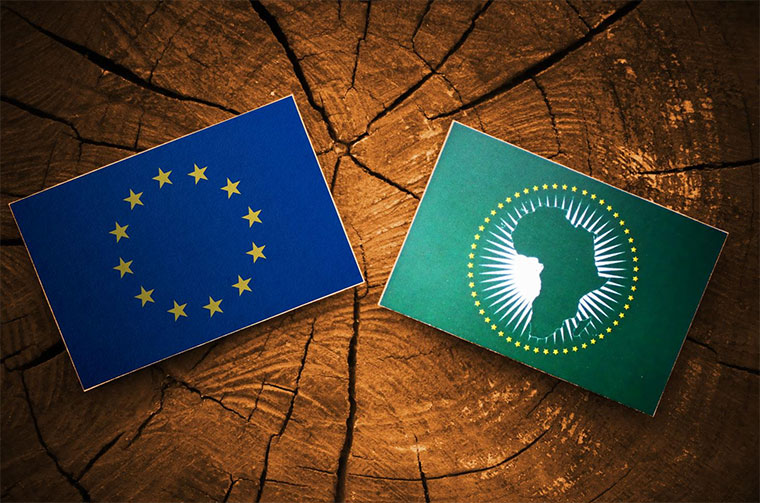 I am travelling this week to Africa, a vibrant continent that is preparing its future: pushing ahead the digital transformation, making farming more efficient and sustainable, building new infrastructure to reinforce connections between people, shaping the collective security of the continent and investing in Africa’s greatest resource: its youth.

On all of this, we propose Europe to be Africa’s partner of choice. European investment in Africa is over five times more than that of China. A quarter of African trade is with the EU; it is only 15% with China and 2% with Russia and 90% of African exports enter the EU duty-free.

The EU works with African partners on building the continent’s first manufacturing sites for vaccines and we approved at the AU-EU summit a Global Gateway €150 billion investment package. With the European Peace Facility and our training missions, we help strengthen peace and security.

However, the world’s future is clouded by the devastating consequences of Russia’s war against Ukraine on food security, energy prices, debt and security issues. This war is affecting everyone, but Africa is one of its main collateral victims. While we know that some countries on the African continent look at this war from a different perspective than we do, I think we can agree on four fundamental points.

First: Europe, Africa – and the entire world - cannot accept a world of ‘might makes rights’, where big powers can claim ‘spheres of influence’ and attack neighbours to annex their territory. The Russian aggression against Ukraine is a perfect example of 19th century type of cruel imperialism that Africa experienced.

Precisely because Europeans are aware of their responsibilities in that era, the EU intends to stand against renewed imperialism. We must uphold and reinvigorate the multilateral order, to defend the rule of law as we decided jointly at the recent EU-Africa Summit. That is one particular reason why the EU supports the call of President Sall for a G20 seat for the African Union.

Second: We must act to ease the current food crisis. With over 70 partners, many in Africa, the EU is delivering along four strands of action: solidarity with those who cannot afford food; support to food production; facilitating agricultural trade including by getting Ukrainian grain to Africa; and aligning our food security response in the multilateral system with the UN at its core.

Others try to distract from their responsibility by blaming sanctions. However, the facts are clear. EU sanctions do not prohibit African countries from importing and transporting Russian agricultural goods, or from paying for them. The Russian war is the problem, not sanctions. If our African partners face any concrete issues importing agricultural goods that seem related to our sanctions, we will jointly look at this.

Third: We need to step up our joint work to preserve Africa’s security and safety. In that area, the EU is Africa’s most reliable partner, supporting African peace efforts in eleven missions across the continent. Last April, we supported the African Union with a further €600 million to improve conflict prevention, crisis management and counter-terrorism.

This week, I will be in Mozambique and Somalia. In Mozambique, the EU supports the armed forces so they can restore security in the Cabo Delgado province, and our assistance measures via the European Peace Facility now amount to €89 million.

We are also finalizing programs to support the SADC and Rwandan contingents. Similarly, Somalia can count on our missions to counter piracy and train the Somali armed forces. With a total of €2.3 billion, the EU has also been a reliable supporter of the AU Mission to Somalia, for more than 10 years.

With 78 security personnel, Russia contributes very little to UN peacekeeping operations in Africa compared to the 6,000 coming from EU countries. On the contrary, Russia contributes to the deterioration of the security situation in Africa with several hundred mercenaries from private military companies such as Wagner or Patriot. This presence only aggravates crises and multiplies the violations of human rights, as we see in
Mali and Central African Republic.

Fourth: Africa and Europe should continue to prepare the future instead of falling back into the past. While some try to divide us by resuscitating old patterns, this ignores the long way we have come together during the last decades. Colonialism is an indelible stain on the conscience of Europe, but dealing with our responsibility for the past has made us better partners for the future.

Europe is looking at Africa with fresh eyes: with optimism and confidence. That is the reason why we want to deepen our partnership, always giving top priority to
“African solutions for African problems.”

However, others seem tempted to repeat the mistakes made once by Europeans, by seeking to simply extract African raw materials, control land and agriculture, place African countries in financial dependence or try to exploit the dynamism of its youth for their own benefit.

As we in Europe are working to reinforce the EU’s strategic autonomy, we are supporting Africa to do the same. We must all work with multiple partners, based on mutual respect and international law. These are the rules of the 21st century. In that framework, Africa and Europe should further deepen their ties and cooperation because your future is
also our future.

Many African presidents are dictators (Sudan, DRC, Rwanda, Uganda etc) but the EU works very closely with them.

Why don't you put tough conditions or sanctions on these dictators to respect democracy and human rights the same way you have done to Russia?

As long as African population go along with their useles rulers/dictators, EU will just benefit from African resources while pretending otherwise!

Even B. Johonsil who had to call for early election then had to stand down believed dictator Kagame is solution to migration in UK!

Ugandans MUST bring down the tribalistic system & UNITE to get back their land, or things will get worse as now, China is doing every thing to get hold of the continent's natural resourses, pretending it's helping Africans!
Report to administrator
12