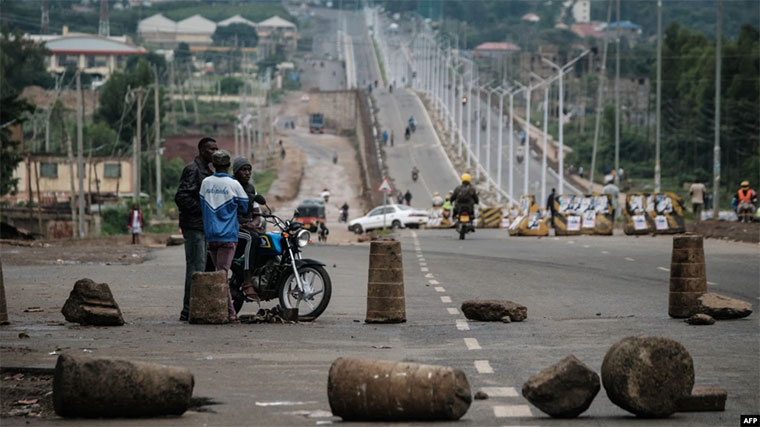 There is an often-cited piece of folklore on violence and state-making commonly chanted in moments of agitation.

It is not clear whether it is original to Tamale Mirundi or comrade brother Y.K. Museveni. One of these two Ugandans philosophized that, “ensi egula mirambo,” which would be loosely translated as “nations or states are built on the backs of dead bodies.”

It was a powerful endorsement of violence, clearly extracted, if not from Aristotle or Machiavelli, from Franz Fanonian politics. Responders to this slogan have quickly added, “nga tekuli wuwo or nga tekuli gugwo,” that is, only when “neither of the dead is your kindred or yourself.”

In other words, if the dead bodies upon which the state will be built do not include any of your beloved brother and sisters, or yourself, you may go ahead and instigate or participate in the creation of these bodies.

Thus, this exchange is often successfully and is used to silence political descent, specifically with potential for demonstrations. They will tell you, “The state will kill your children!” And you’ll be reminded that “the police have the right to shoot you!” [I still wonder why Parliament has not deleted Article 29 from the Ugandan constitution.

Because in practice, the police and other security organs outlawed demonstrations and all forms of assembly however peaceful they might be].

As we watch the Kenyans election with bated breath, with a spectre of violence assumed to be hovering over the country, this simple but powerful piece of folklore (ensi egula milambo) should be instructive at three levels: First, this is not about ordinary people choosing to sacrifice themselves on suicide missions for the state.

Neither is this an endorsement of armed rebellion as bwana Museveni chose in 1980. This is about appreciating the limits of our civility and the need to protect it.

Secondly, if we are all afraid of killing ourselves or afraid of the death of our kindred in senseless violence—which we are capable of—then there is need for a more respectful regime of governance. And third, and this is more powerful, the knowledge—or even demonstration— that the citizenry is capable of senseless violence should be palpable in our bodies and thus force people with power to act with more care.

I am interested in the condition where the people have demonstrated the capacity of violence—senseless violence—not only amongst themselves or targeting those who lead them, but also the entire idea of the state.

Because since leaders tend to control the tools of organised violence, they tend to misgovern with wanton abandon. Because they are content to use the sophisticated tools of violence to coerce the citizenry, they also get the aura of being untouchable.

This is so true about Uganda. [Please do not obfuscate this with examples from Somalia, Libya or the Central African Republic. These countries represent an entirely different ball game].

If there is anything we could learn from the Kenyan election (thus far) it is how state actors are going about their business with absolute caution and respect for their citizenry. Even if it means stealing the election, this has to be executed with utmost sophistication and care.

Because the people have demonstrated a capacity for senseless violence. While observers are anxiously watching Kenya—eagerly pointing out any moments of contention as a potential spark for another round of violence—it is arguable that, to a great degree, it is the legacy of the 2007-2008 electoral violence that is holding the country together.

Even the Independent Electoral Commission of Kenya had to be advised to slow down lest a hasty release of results without reading the emotions would spark angry reactions. In truth, the people of Kenya demonstrated the power to hold their state at gunpoint—which is a necessary precondition for a sane government.

The present political actors know that the ordinary people are capable of senselessly challenging any pretensions of order. And the net effect of this is the awareness that no one is safe in the event of disorderly violence.

Against this, it is my contention that in the unlikely event [highly unlikely] that Kenya slides into violence, it would be a major surprise. Because the violence of 2007-2008 was so overwhelming that needs to hold Kenya together for the next 80-100 years.

All current actors and their electorate have vivid memories of this period and these memories compel all involved for more caution and care. Thus, among other things, I’ll not be surprised for a coalition government. Because the centre has to hold, and the winner-take-all mentality is simply colonial for newly independent African states.

Watching Kenya from the Ugandan side, I marvel at how Ugandan political actors are endlessly, constantly, prodding their citizens to gauge their capabilities of fighting them back.

The events of November 2020 had potential for a major fallout. Dear bwana Museveni and team, Kenya ought to instruct us as well. We do not have to go through the same to take our lessons. This thing can be nasty for all of us.

Odinga MUST NOT BE ALLOWED to cause more killings, trouble, NO NO, as he doesn't know what being poor is!

Time Kenya bolster its public/social services to ensure the people are served, especially as Kenya is peaceful home for migrants refugees & has been so for years!

This 5 years MUST NOT BE WASTED in useless fight for power as this will only make the peaceful Kenya election 'a waste'!

Kenyans, will you give us chance to know what belonging to a country, going for peaceful campaign & election mean, by UNITY NOW, to conclude the election & give chance to a real beginning to another Kenya, where poor Kenyans won't be ignored, while UN/Agencies takes care of migrants/refugees in your land, but ignore you?
Report to administrator
12