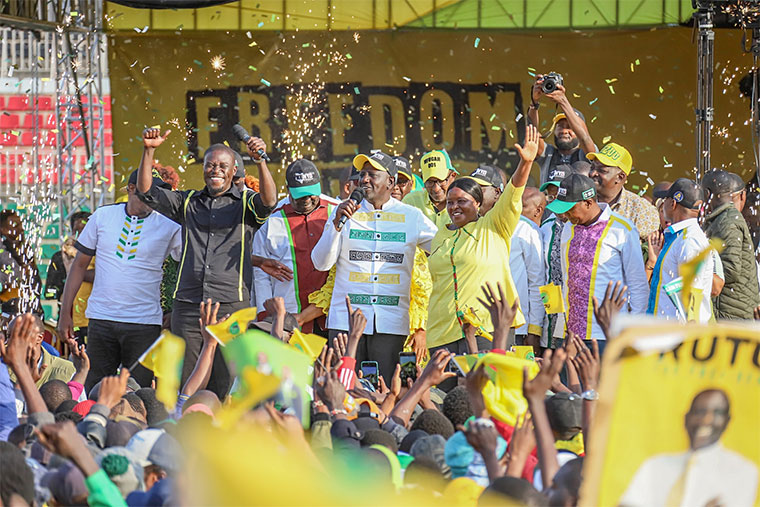 William Ruto during the campaigns

History was made on Monday when the Independent Electoral and Boundaries Commission (IEBC) chairman declared Samuel William Ruto as the president-elect of Kenya. What people said would never happen, happened in broad daylight.

Obviously, it is a start of a new era in the politics of Kenya and a lot will change especially the economy. The election observers had earlier praised the IEBC for conducting a peaceful, free and fair election, and I think I agree with them that the process was very smooth.

It's also an indication that the Kenyans have picked lessons from the past elections where ethnicity took centre stage and thousands of Kenyans lost their lives in the senseless conflicts that could have been avoided if the candidates chose unity and peace instead dividing the people of Kenya along tribal lines.

If this trend is kept, Kenya will be a good example of democracy and rule of law in the entire East Africa and Africa. Through Ruto, the Ugandan yellow revolution has ably spread its wings to Kenya. The UDA political party in the last concluded election was simply a duplicate of the National Resistance Movement party of Uganda.

They did not only pick yellow as their official political party colour but they also picked some principles of NRM which is social economic transformation and summarized it as the bottom-up system.

The Kenya Kwanza presidential candidate seems to have really read, admired and studied the NRM principles and appreciated them to an extent of borrowing some of them to be his top priority in his manifesto. There's no doubt that all these programs will work because they have been tried in Uganda and they've worked.

Ruto, proudly associated himself with the President of Uganda even before declaring to run for the presidency in Kenya. He has had several visits to Uganda and at one time he went on the podium to campaign for President Museveni in Kapchorwa municipality.

In that statement, I think he was awakening the youth who had been misled by the opposition then, to go against the NRM government because it has failed to create for them jobs. The opposition had forgotten that jobs and other opportunities can only be created when the country is at peace.

Ruto took it as a responsibility to explain to the young people who had been misled, and I think they got the message because the NRM won that election, it also means that he understands that the stability of the country should come first before anything and that's when everything will be possible, that's what the NRM government has prioritized and it's the same reason as to why are progressing and unstoppable.

Ruto's opponents have been criticizing him for the good political relationship he has with Museveni. They have accused him of wanting to force the NRM on them. In fact, some opposition propagandists in Kenya also alleged that Ruto was going to rig elections with the help of the Uganda government.

They forgot that an able IEBC chairman was in charge and was going to make sure that he presides over a transparent electoral process in Kenya. The Ugandan political actors, who are mostly in opposition have since then gone silent with none of them congratulating the Kenyan president-elect.

I'm sure they understand that NRM once again won in Kenya and if they're wise enough, this is the right time for them to understand that the National Resistance Movement is built on a firm foundation that a candidate from another country can stand on and win elections.

The writer is a deputy RDC Kyenjojo district

+3 #1 Lakwena 2022-08-19 08:52
In other words Resident Dictator, the NRM criminal revolutionaries are fanning out their criminality into Kenya.