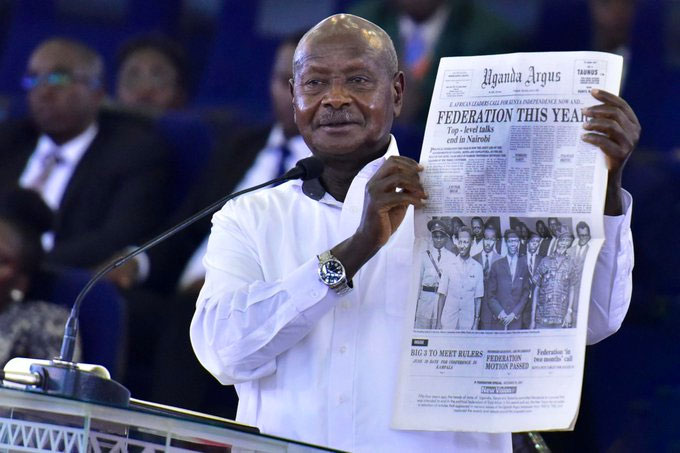 In response to an announcement that President Yoweri Museveni was to address the country on August 5, his third address in two weeks, several Ugandans wondered why the president’s addresses are becoming a regular fixture.

A cheeky netizen employing Ugandan English tweeted that the president was ‘talk talking’ to us a tad much. With the skyrocketing cost of living, Museveni like many a president should demonstrate his government actually likes its citizens.

While neighbouring governments have taken the ‘easier’ route of effecting policies to alleviate the tightening of belts, Museveni, the revolutionary, has chosen the harder road of intransigence. Thus, Museveni is keen to explain that while it appears as if his government is doing nothing about the economic pressures; on the contrary, they are securing Uganda’s future.

Parading scientists and innovators, Museveni’s recent speeches display the strides Uganda is making for the future despite his audience’s expectations that they will hear solutions relevant to their present reality of increasing fuel and food prices.

A studious devotee of history, Museveni in his speeches comfortably throws back anywhere between 1400 and 1900 or the years Jesus walked the earth. From there, he assuredly works his way to the sun-kissed year of 1986 right down to the present day.

Yet, Museveni finds the present day frustrating that he prefers projecting the future, a future that sounds alien to the crises of today. In his May 22 address, Museveni took to explaining how the economic pressures we are currently experiencing are not so deadly a crisis like Covid-19. Therefore, we must not bring our feelings into this.

Like telling a hungry person that the hunger pangs they feel are an opportunity to experience the vigilance of their body, Museveni elaborated with various ‘if’ scenarios, showcasing the crisis as an opportunity. Urging us to turn to our local foods like cassava, millet and sorghum in place of the imported wheat, he further beseeched us to be frugal or make do without certain items.

Reminding us of the recent challenges his government has overcome like “... the locusts, the rising waters of the lakes, the floating islands, the landslides, the terrorist bombs, the Covid-19 and now the rising commodity prices artificially caused by the Ukrainian war,” Museveni projected nonchalant control.

So, what is Museveni trying to tell us repeatedly?

That he is consistent. Museveni’s audacious faith has him spinning us into a future heaving with made-in-Uganda electric cars. He must wonder why you stand arms akimbo instead of celebrating the great future that is ours by pontification. Museveni sees himself as having delivered the hardest part - he fought, he secured the country. As he speaks, one feels he is exasperated, perhaps even more than we are.

In casting blame everywhere apart from himself, he communicates that he had one main assignment - 1986; he delivered on that assignment. The rest, therefore, is up to us as he denigrates his party and government officials as clueless, fickle, corrupt, myopic and lazy.

At the 2017 national prayer breakfast, Museveni scoffed, “In 500 years, all Africa has managed to make is fire and iron. Even China has been absent, but of late, they have at least copied those innovations. But Africa, nothing! I hate this helpless approach where you only pray and shout as if God is deaf.”

A revolutionary with his eye on ideology and poverty alleviation, Museveni does not entertain helplessness. He is trapped between his unflinching projections of a strong robust Uganda and the expectations of his quisling citizens who incessantly fix their eyes on the reality of their tightening belts.

To these myopic citizens, as cartoonist Spire depicted last week, Museveni’s consistency is as callous as pie in the sky.

New Zealand prime minister Jacinda Ardern, speaking on the balance between strength and empathy, in her book, I Know This to be True, Jacinda Ardern, noted, “We need our leaders to be able to empathize with the circumstances of others; to empathise with the next generation that we’re making decisions on behalf of. And if we focus only on being seen to be the strongest, most powerful person in the room, then I think we lose what we’re meant to be here for.”

During the August 4 anniversary celebrations of the Daily Monitor newspaper, lawyer David Mpanga revealed why he stepped back from writing his Daily Monitor weekly column on political and current affairs.

Mpanga perceived after a while that his weekly column had nothing new to say because nothing had fundamentally changed in Uganda’s governance. He predicted that we would keep decrying the same pains of corruption, nepotism, poor governance, and poor service delivery unless the systemic issues are dealt with.

For Mpanga, that fundamental change was to recognize the vicious cycle his writing had been sucked into and courageously accept he had nothing profoundly new to add unless the foundations were dealt with.

Museveni finds himself assailed similarly but will he look up from his speeches and acknowledge his consistency is as frustrated as his fellow citizens are? In the meantime, a new simile is born - as consistent as Museveni.

Reminder 2 : Olivia, if our country has not been captured by fortune hunters , Parliament would be for the people like Owekitibwa David Mpanga , not the musevenised 'trush' we have today.

A primary school debate session would perform better than the current Ki- Parliament.
- Listening to museveni in these addresses struggling to express himself, one wonders what material people who adore him are made of .
Report to administrator
+2 #3 Akot 2022-08-10 20:02
OLIVIA NALUBWAMA,

Museveni knows Uganda belongs to him & it's now a matter of time he dissolves posts of tribal leaders & reform the republic, just as he wants!

Ugandans have no real opposition, yet go for fake elections to ensure Museveni's post, so who will stand up to say NO, if he makes Uganda a real country again & not a distusting tribally divided ruled shithole?

Museveni is about to conclude conquest of Uganda & Ugandans have been/are just helping him!
Report to administrator
+5 #4 mass 2022-08-10 20:59
Tayaad Muzukulu you nailed it! However I doubt that m7 feels any frustration. He is a prankster who uses history to confuse the both the elites and masses, as he matches forward to control all the political and economic power to his kinsmen and their descendants.
Report to administrator
+7 #5 Lakwena 2022-08-11 09:18
In other words Tayaad Muzukulu, Gen Tibuhaburwa is consistent in his dishonesty.

Full of himself and deluded in self-deception, the man is a psycho who simply loves to listen to himself and falsehood.

Otherwise, after telling off Ugandans in broad-day-light on 26th Jan 2017, that he is neither their servant nor employee, I wonder why the man still thinks Ugandans want to listen to his dishonesty.
Report to administrator
+1 #6 Akot 2022-08-14 19:32
Quoting mass:

I doubt that m7 feels any frustration. He is a prankster who uses history to confuse the both the elites and masses, as he matches forward to control all the political and economic power to his kinsmen and their descendants.

m7 has Uganda, he made it, rules as he wishes, his family heritage assured!

Tayaad Muzukulu, Gen Tibuhaburwa is consistent in his dishonesty.

Full of himself and deluded in self-deception, the man is a psycho who simply loves to listen to himself and falsehood.

Museveni won't stop spitting on Ugandans unless they say NO to the tribalistic system & stop him in UNITY!

It's up to Ugandans to FREE themselves from Museveni & get back their land, then form the kind of governance they want!

Why wait to legalise Museveni's 45 years in power with next fake presidential & parliamentary elections?

When will Ugandans understand it's the people to whom tribal lands that form Uganda belong, who have the power, but in UNITY, to end Museveni's hold on their land, tax money?

Dr Obote & Sir E. Mutesa ll put aside their differences to give chance to UNITY for independence from UK in peace, at a time when all conquered lands were at armed wars for freedom!

All the other tribes UNITED to say NO to Tito Okello/Acholi & Museveni walked in Kampala, Entebbe...without afight!