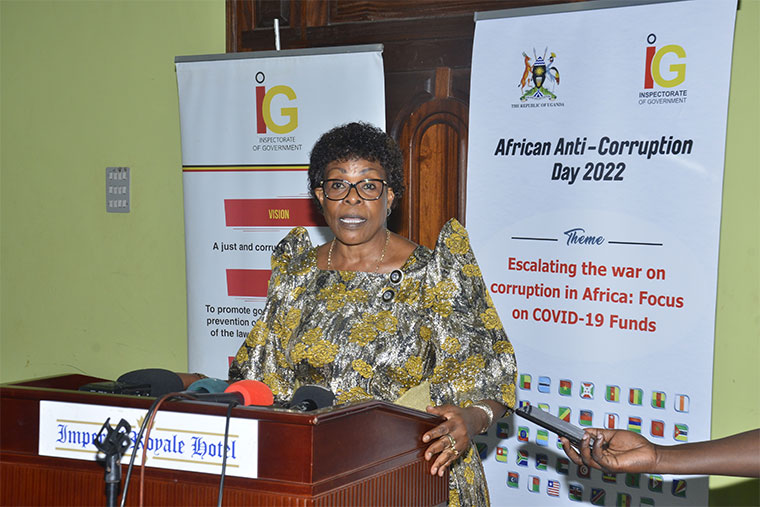 On July 29, the Inspectorate of Government (IG) the Inter-Religious Council of Uganda (IRCU), united against the corruption blighting our wonderful land, called upon the heavens to join Uganda’s anti-corruption fight.

The IG boss, Beti Kamya, stressed that Uganda being a God-fearing nation, God must be at the centre of the fight. Kamya worried that with the passing of the national budget, the fat corrupt leeches were already furiously calculating how much of that money they would pocket.

Last year, the IG reported that Uganda loses Shs 20 billion to corruption annually. Thus, the IG, IRCU, and others met to pray that God would move mightily and smite the evil of corruption.

Before we prayed, we walked. In December 2019, the IG organized a walk against corruption led by President Yoweri Museveni. Museveni, fit as a fiddle, walked and made corruption tired. By the end of the walk, corruption was no more in this land.

Alas, non-believers like Rev Fr. Gaetano Batanyenda, the former chairperson for Kick Corruption out of Uganda, commented: “What can show Ugandans that Museveni’s actions in fighting corruption have yielded fruits? Maybe he will walk for two hours yet he has been in power for over 30 years and failed to kick out corruption.”

The Daily Monitor newspaper stated that after the productive walk, Museveni denounced the corrupt, warning, “...I know many of you are corrupt. If you see I have not yet arrested you, don’t think you are safe. I am just still looking for enough evidence.”

Speaking of evidence of corruption, on December 9, 2021, the IG in yet another ritual against corruption, invited Museveni to launch the lifestyle audit initiative. Kamya, pumped with optimism, explained this initiative would finally net the big fish. Museveni, though, was not too keen on Kamya's innovation. He indulged Kamya and clarified, "We are still lucky tear our corrupt people are corrupt here; they steal the money, and put it here, you see a five-star hotel from corruption. Now if you only concentrate on the lifestyle, then they will take the money out and you will have no evidence here.”

Thus, inadvertently, Museveni also indicated he had found the elusive evidence of corruption in his Uganda. We have the evidence but yes, let us pray. A March 2021 Afrobarometer report on Ugandans’ perceptions of corruption documented that Uganda has at least nine wonderful laws against corruption and six robust anti- corruption offices.

The Afrobarometer report indicated that majority of Ugandans think corruption is getting worse and that government is doing poorly in fighting the vice. Those Ugandans must be myopic non-believers.

Afrobarometer also underlined that many Ugandans engage in corruption by mainly paying bribes to access government services. The findings show the poor are more vulnerable to demands for bribes.

Maybe we should go slow on these prayers. We might find that we are most amusing to God when we pray against our corruption. For what do we expect the heavens to do? Snuff out the hearts of the corrupt? What if we, alongside half of the country, drop dead instantly because of prayers smiting the corrupt?

What if the religious leaders leading the prayers are cut down right there at the microphone as they stand together in perfect unity because they prayed that God would cut down the corrupt? Dear Lord, do not heed these prayers!

A Christian congregation in the beautiful Kigezi was quite miffed over the president’s gift to their bishop, reported The Observer. The president gifted the bishop a brand new Renault vehicle worth $40,000. Oh but the accursed covetousness that assail us!

Why should one bishop be saddled with a mere Renault when the president has freely given other religious leaders powerful monstrous Toyota Landcruisers. The congregation was mortified - who goes to preach the Word of God amidst the hills and valleys of Kigezi in a Renault? What would Jesus do? However, the president, like an absent-minded generous grandfather doting on his spoiled bazzukulu/ grandchildren, leveled up.

The president’s office delivered a brand new Toyota Landcruiser worth $130,000; the one that glints in the Kampala sun; the one that effortlessly roars over the hills, potholes, and valleys; the one that on ignition, purrs like the grand machine that the car is; the one that makes speeding on our dangerous roads an elegant experience.

That car is the chosen one. The congregation was happy. The prelate was delighted. The Church is set to reach many more people now. But yes, let us close our eyes and pray corruption out of our land. Let us press our eyelids shut as we stand on the grassy expanse of the Kololo ceremonial grounds, a ground that was once free to the public but now stands guarded by menacing soldiers, closed off to the public.

As we pray, let us reflect on the Soroti by-election. Let us lift up our angelic voices and drown out the opposition laments of electoral violence and malpractice. Let us lift up holy hands as the government spokesperson asserts unapologetically his right to violence in the face of arguments he deems insulting.

Our minister for Ethics and Integrity, a deified ministry, might be deeper than most in prayer for the bread of ethics and integrity is backbreaking work. This minister is clearly not spending enough time in prayer. Let us pray!

I was baptized and confirmed Catholic before I drifted to the born-again group. When I see folks wearing rosaries and engaging in evil, I get depressed.

It is akin to a married person cheating on his/her spouse while wearing a wedding ring. Corrupt people are in every religion, not just in the Catholic church.

They should speak to those in power as well without fear of retribution. I am waiting to hear whether the thuggery that happened in Soroti-East by-election will be condemned in churches and mosques. If our clerics keep silent, then thuggery gets normalized and we shall all reap bitter fruits of a broken country.
Quote | Report to administrator
+3 #3 Lakwena 2022-08-04 09:43
Thanks Tayaad Muzzukulu for the pontification about corruption.

Including the IGG herself, the clerics are the typical Hypocrites Jesus berated at in the last chapter of Mathew (36): "Woe unto you hypocrites ...: to pray to God to rid this country of corruption is corruption itself.

In other words, they are irredeemable when it comes to being corrupt and corrupted.

Corrupt and Corrupted because, Gen Tibuhaburwa came and holds unto power through the abomination of breaking (corrupting) all the legal and moral laws of the Land/Bible.
Quote | Report to administrator
+2 #4 Lakwena 2022-08-04 09:50
In 2019, on his odious and dubious 190km Reminiscence Walk of 1981-1986 Luweero Days, where were these praying Bishops e.g. when Gen Tibuhaurwa blatantly and without blinking, told off the people of Luweero/Ugandans; how they robbed the Bank of Uganda Currency Center in Kabale and UCB Bank Branches in order to fund their subversion?

In other words, whose money was robbed from the Currency Center in Kabale, and who compensated the UCB Depositors?

Otherwise, to redeem themselves; the Bishops and praying fat cats would have to do what Jesus counseled the young rich man who wanted to follow him; to first go back: sell everything he had, give the proceeds to poor and then follow him.

Moreover, when shove comes to push, he should also prepare to carry his own cross. Else, it easier for the camel/elephant to pass through the eye of a needle than the rich Bishop/man to enter the Kingdom of God.

So, you are not aware Ugandans are tribally divided slaves & not UNITED?

How can the heavens join tribally divided ruled Ugandans in anything, especially when tribal leaders are alright, eat well, their kids future assured?

Do tribal leaders, ministers, mps...want change, when they pray, fight to maintain their posts or get included in Museveni's pay roll?

What will be the situation when Museveni finally kicks the bucket when ALL look up to him with no plan for a Uganda without him?
Quote | Report to administrator
0 #6 Akot 2022-08-05 19:44
Quoting Joe:

Prayer works but we can't pray away evil without taking actions that result from the wisdom of God.

Christian leaders have a responsibility to cultivate morality into society.

If our clerics keep silent, then thuggery gets normalized and we shall all reap bitter fruits of a broken country.

Ugandans MUST WAKE UP! How can God help a tribally divided ruled enemies of themselves ensuring their enslavement to a common demon ruler?

The reason USA/UK/EU didn't oversee last fake presidential election was because they finally understood that Uganda is tribally divided ruled & this goes against theri democratic principle!

Who do tribally divided ruled Ugandans expect to help them, when not even their tribal leaders say a word about the inhumanity going on?
Quote | Report to administrator
0 #7 Akot 2022-08-05 19:51
Uncle Philo, thanks.

Don't worry, God created everything; the earth will fight & protect itself, nomatter what humans insist on doing!

Don't demon dictators/rulers also die of old age & have no power over it?

This is why Ugandans MUST say NO to the tribalistic system & UNITE to give chance to continuity, before Museveni drops dead of old age, leaving them tribally divided ruled, without National Leadership, without National Goals!

Not even tribal leaders know what to do without Museveni, non knows how to govern tribal land & serve subjects, right?