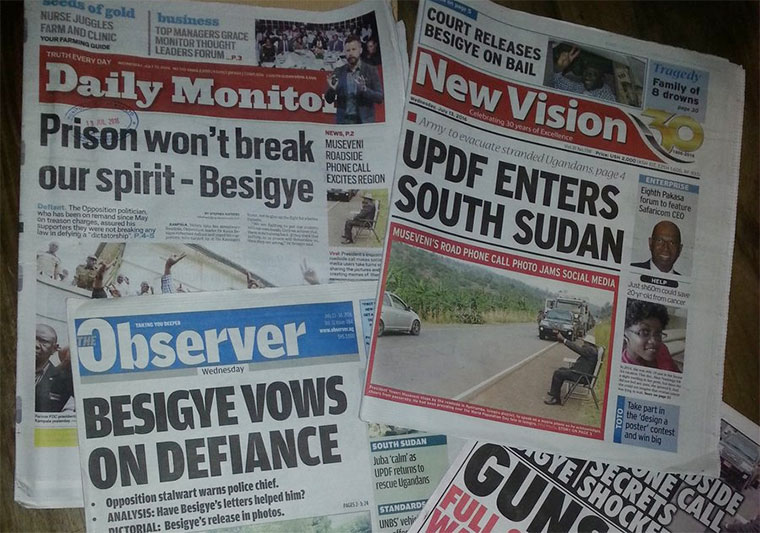 The Daily Monitor is celebrating 30 years of existence and they surely deserve felicitations for the journey they've walked.
Not all companies thrive for all that period of time, several others fail mostly because of managerial issues or some other challenges. There's no doubt that the Daily Monitor and New Vision are Uganda's most selling and popular newspapers.
Whereas the world is migrating from newspapers to the internet and social media news but many other people still value newspapers and they surely rely on them for purposes of getting reliable information. However, there's still a challenge of bad reading culture not only Uganda but I'm told in Africa as a whole.
Many people do not have time to sit down and read something, instead, others do it as a fantasy. During campaigns, Bobi Wine used to pose for pictures while reading books written by famous authors. Since the campaign ended, I have never seen another picture of him reading something - meaning it was just a stunt.
However surprisingly and shocking indeed, I  have seen a tweet from NTV Uganda, saying that the Daily Monitor has pulled through a dingy basement to putting up its own home despite 'government denial' of adverts and threats. That was a very unfortunate and unfair statement because the Daily Monitor deliberately decided to take an opposite side of the government in what they call "Telling the truth".
To them, I think telling the means focusing on the negative side of something which I think is wrong. Who would therefore freely associate with an individual who only focuses on the negative side and sometimes cooks up lies for the sake of criticizing and creating what they call truth.
I actually found out that some people who are loyal to the government have since then given up on the Daily Monitor, few of them can freely buy it and read it. The president of Uganda has on several occasions complained about the Daily Monitor newspaper in his speeches to the nation. Sometimes he even carries the paper to read those misleading contents. One time, he came across a positive story about the government and he cracked a joke about it.
He said that once you see the Daily Monitor writing something positive about the government then know a lot has been accomplished. I think the agencies of the government also decide to isolate the paper because in any case if the president frequently complains about the Daily Monitor, then why would anybody keep identifying themselves with it?
That would be a clear portrayal of insubordination. For instance, why would government run adverts about the Parish Development Model in a paper which carries five negative stories about the same program? Would that advert really carry any sense or relevance?
Not at all, it would actually mean that the money has simply been put to waste. However, if they could market the government programs then government agencies would be free to give them adverts.
The media should be impartial, everyone knows that the media must be neutral. But impartiality doesn't mean being purely negative about whatever the government does, impartiality means giving both sides attention and you leave the consumer to be the one to judge.
Sometimes one maybe forced to think that maybe someone at the Daily Monitor is pushing for political motives against the sitting government and I think he or she will be right. One day, I was chatting with a journalist of a certain famous media house in Uganda and I revealed to him how I longed to appear in one of their most popular political talk shows.
The journalist was very frank with me and he said that he would never allow someone in a capacity of an RDC to appear on that show. His problem was not about content but the position of  RDC. To him, such a person has no right to appear on that program because they're agents of the state and who boldly defend the government.
I have spent sometime writing articles and every time I write, I make sure that submit to Daily Monitor for publishing but surprisingly none of my articles has ever appeared. Not because my articles are substandard, but because the Daily Monitor doesn't embrace anything which is pro-government. I'm sure that if my articles were criticizing the government and the incumbent president, the Daily Monitor would be giving them space.
So why shouldn't someone be at liberty to conclude that indeed the Daily Monitor is very biased and so negative about the government.?
The writer is a deputy RDC Kyenjojo district.

+3 #1 Lysol 2022-08-03 10:20
The Monitor of today is not different from the New Vision.
Quote | Report to administrator
Refresh comments list
RSS feed for comments to this post
Add comment