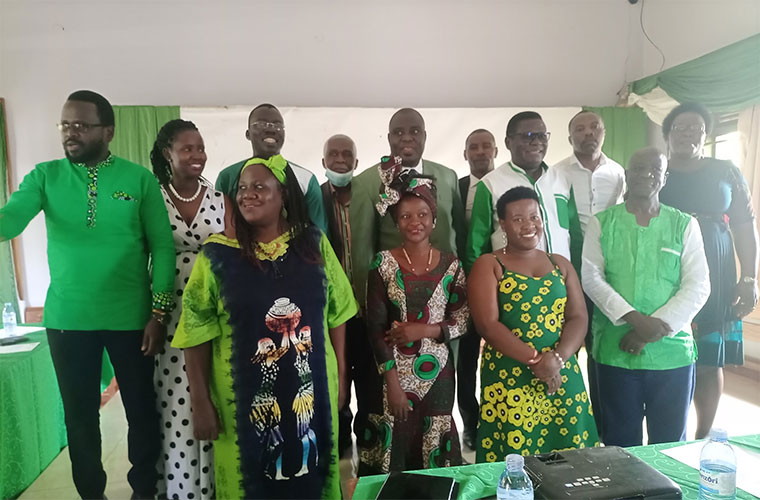 I was temporarily released by the doctors and will return to the hospital mid-next week to begin the second phase of my treatment....it's such a terrible and difficult process, but it's also a lesson in some ways. We shall conquer and recover from this man-made imposed disease by the grace of the Lord. We praise the Lord because the Holy Spirit has given us the ability to endure the suffering for this long.

Videos of Dr Kawanga Ssemogerere and others have been "splashed" all over social media to justify Mao's going to Museveni's kraal with DP. The videos are intended to demonstrate that what Mao is doing is similar to what Ssemogerere did in 1986.

Courts of law have always offered guidance to minds that may be confused by two or more outstanding situations, by moving to distinguish one thing from the other even when the two may appear to be identical, of course before simple minds that are targeted by peddlers of deceit, as it is in this case.

God used me to foretell the political future of Mao...As a result, Mao's public affair with the junta comes as no surprise. The junta needed a frontline operative in Acholi territory after the death of Oulanyah, and the pumpkin was due for harvest. Ask Omara Atubo if a written agreement is essential. I'm writing to shed some light on NRM propagandists who are posting old videos of Ssemogerere and others swearing in to become ministers in 1986 on social media.

The videos are being disseminated to deceive Ugandans, particularly young people, into believing that what Mao is doing is legal and legitimate, similar to what Ssemwogerere and his comrades did in 1986. The first thing to note is that Ssemogerere never entered the 1986 government alone or stealthily.

The 1986 government was properly declared an all-inclusive government, with political parties suspended, and was meant to last for two years, which were later extended to four, and finally nine, to allow for the writing of a new constitution and the establishment of a new non-partisan government in Uganda.

But when it became evident that M7 was only playing the Ugandan people for fools and gaining time to establish an entrenched dictatorship rather than a new beginning for our nation, sane political gurus abandoned him. Indeed, Ssemogerere and his colleagues opposed Museveni's regime from the time the Constitution was adopted in 1995...Not only that, but they also took Museveni to court for deceptively ushering in one political party disguised as a movement during the unity time, and the court ruled in their favour.

They also joined forces with other political parties to form an opposition against the then-visible dictatorship and Junta. So who can mislead you into thinking that Museveni now and Uganda in 1986 are comparable? The Uganda of 1986 was presented as an endeavour to reconstruct our country based on a well-defined Ten Points Program drafted by parliament...the Uganda of today is a fully set contest between the junta on one side and Ugandans on the other. Museveni is without a disguise constructing a political dynasty by exploiting state resources corruptly and at gunpoint to persuade various Ugandans to join and support this evil mission.

The Museveni of 1986 was presented as a leader of a pro-Uganda regime while the one of today is a full-blown dictator with a son who openly carries himself around as a crown prince. What Mao is trying to do is to take DP to be a building brick for the dynasty that has been shamelessly unveiled before the world. Mao and his boss think that the traditional support of DP is available for the job and Mao has been positioned as a chief potter....Alternatively Museveni through Mao seeks to make DP unavailable for the war they have declared on our country. Unfortunately, they have now made DP available.... (watch the space)

In this video obtained from the UTV archives and released to cause confusion ....Mao and the Museveni propagandists are trying to compare a litre of waragi to a jerrycan of water with an intention of fooling Ugandans that they are one and the same. Even if you are to say that DP joined NRM party in government.....This is supposedly a "multiparty period " and hence what is in power is a partisan regime while the 1986 government was an all inclusive regime in a period when multiparty politics had been put on hold to enable Uganda make a fresh start.

So this deceptively calculated publication was obviously released to confuse young Ugandans as indicated above who are the majority to erroneously believe that Mao is the DP in a government of national Unity but I wish to observe that what the Ssemogerere’s did in 1986 was distinguishable from the betrayal Mao and his "ka-gang" did when they secretly joined Museveni in his clearly devilish manoeuvres to turn our country into a hereditary presidential dynasty.

Most probably Mao and his "ka-gang" seek to be the official royal-pegs. However, others who have attempted to make "modern-day presidential-kingdoms" have miserably failed so will Museveni. Mao desperately wishes to cling to the hard earned Ssemogerere legacy of clean politics....On the martyrdom of Benedicto Kiwanuka and the many Ugandans who over years had their blood shed in payment for the independence of Uganda and democracy.

On the blood of the people of Northern Uganda...Mao is there to cash in on the peril of the children who painfully nod their innocent heads to death, on the Acholi land earmarked for grabbing and on the ongoing land grabbing in northern Uganda and Uganda at large...We know more blood will be shed to pay the price...as stated above he comes into the regime to replace the late speaker Oulanyah and to reinforce the old Moses Ali in northern Uganda.

Mao is so selfish that he can't tell Ugandans that Ssemogerere and his colleagues had been reluctant to join Museveni's 1986-cabinet to the extent that he was kidnapped by the rebel soldiers and taken at gunpoint to Museveni at Nabbingo-Buddo where Museveni had camped.

This 2022-conspiracy comes after the new claim of our country that demands of Ugandans to stand up and be counted...but Mao should know that we are ready and we shall never be found wanting in this NEW CALL FOR Patriotism, for bravery for sacrifice, for the clear need to offer leadership to the millions of Ugandans who must stand up in unison from Abim to Zombo in one United non-partisan force....A people led SECOND and FINAL liberation and independence of Uganda.

And....DP will outlive the Museveni-Mao conspiracy and our motherland Uganda will live to see its second liberation and rebirth. I remember telling Ugandans as I joined NUP that I have some unfinished business in DP and here we are....Thank you Mao for offering us the opportunity by creating space....The pumpkin is harvested, cooked and eaten!  And it's now time for us to move out for an alliance with the DP-membership.

The author is Mukono Municipality MP

123
0 #21 Charles Oruk 2022-08-03 10:53
[quote name="Remase"]Oruk, in your own words, "That's not a health behavior among political parties." That was in reference to DP members who crossed to NUP but still fighting DP leadership. That's why I asked, what's healthy about politics in Uganda?

As the saying goes, you cannot serve two masters. You serve one at a time. So, in order to play healthy politics those former DP who left the party should decide. Either they go back to DP and concentrate in building it or stay in NUP, work and build it.

You cannot divorce you wife, marry another one but you still go and fight the one you have divorced.
Report to administrator
123