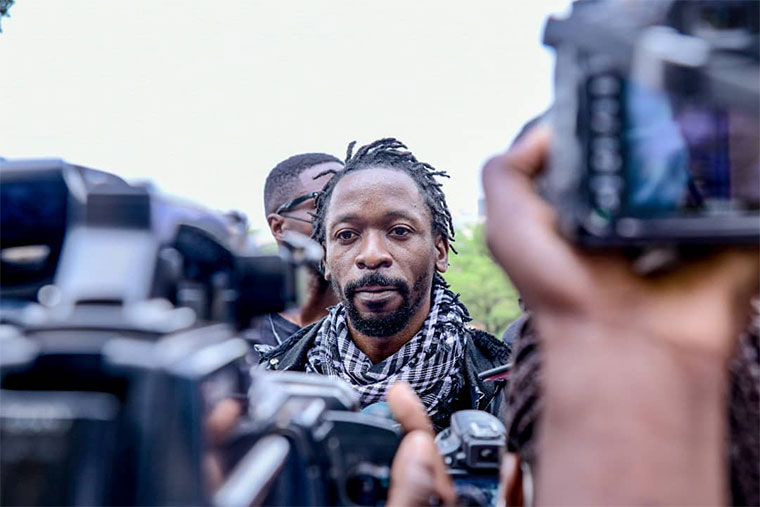 I recently rewatched the videos of the social media tax protests.

In there, you will find many fine persons, including my friend, NTV journalist Raymond Mujuni, in a red pullover, tough-faced, and arms locked with other activists chanting “People Power, our power.”

For the smooth dandy journalist, known for his charm and confidence as he goes about his journalistic craft, taking to Kampala’s streets in protest—with potential for returning home with broken bones—was a move of absolute conviction.

He would have chosen to report the protest, but decided to switch sides and join in. Indeed, on the streets, Mujuni not only brought his convictions, but also his career and celebrity profile.

He thus aligned his beloved career with patriotic duty. Perhaps the most consistent and edgy of our elite activists is my other friend — ‘the foremost essential lawyer’— advocate Isaac Ssemakadde.

We recall him in the chambers at the High court during the Covid-19 lockdown protesting the problematic labels, “essential” and “non-essentials.” The entire lockdown was a sham, but not one lawyer had the guts to challenge it via their cherished turf. Ssemakadde did. Indeed, almost single-handedly, he pushed the courts into some soul-searching. No wonder, ever since, they have had him as urgent agenda item, “a problem to be solved.”

Mark you, this Covid-19 protest is just one of the many daring patriotic initiatives where Ssemakadde has turned his profession into patriotic duty. In truth, all our counsels have to become “problems to be solved.”

I do not need to rehash the story of Dr Stella Nyanzi. As the quintessential activist, Nyanzi so flawlessly aligned academia with activism. Her ruthless takedown of Minister of Education Janet Museveni remains, so far, the minister’s most brutal takedown. Boy, that was tough. [With the lockdown, and then the arts vs sciences debate among so many, I guess the entire education sector now appreciates Nyanzi’s anger].

Indeed, not only did Nyanzi give Makerere the identity of a university (that is, training folks that constantly challenge power), but she also inspired a generation of young female activists. One of these activists—in the Nyanzi tradition—is the bold and smooth-talking entertainment analyst (YouTuber, if you like), Tinah Fierce.

I am not sure Tinah is friends or even a fan of Stella Nyanzi, but boy, her boldness twins so intimately with Nyanzi. For a long time, Tinah has so seamlessly aligned entertainment, gossip, and politics in some easily consumable package.

Indeed, for her speech, she has been hounded. In a recent viral video (we should call it, “Speak”), Tinah, in response to seemingly friendly, but cowardly concerns about her safety, poetically challenges her co-elite compatriots urging them to speak up against the mess we endlessly witness.

She powerfully asks what her safety means to her if it cannot afford her a decent education to her children! I cannot imagine if all other entertainment show hosts – Uncut, Live Wire, Comedy Store, etc.—joined the fray of calling out the madness in the country. What is this pretence of happiness, adopting when the monster is simply closing in? she asks.

Check this out: Perhaps the most listened-to Twitter Space in the history of Uganda’s social media remains that call – they call them ‘calls’ – where renowned journalist Solomon Serwanjja announced hosting Kakwenza Rukirabashaija just days after Kakwenza fled into exile.

You cannot imagine how I so anxiously waited for that moment when Serwanjja would invite all those logged in to join him the next day in peaceful demonstration against the continued brutality of activists by the security forces.

I can go on and on telling story of these elite activists emerging from the mostly quiet and supposedly “satisfied middle- class” and aligning their careers with full-blown activism. There are bold voices in journalists Agnes Atuhaire (Civic Space TV) and Baker Batte Lule (The Observer), Godber Tumushabe (GLISS), columnist and advocate, Gawaya Tegulle, and several others.

While our activism remains mostly spoken word poetry, the streets are calling. Speeches, columns, Twitter-spaces, reports, and all are wonderful modes of expression. But they have their limitations. The elite activist soon realises that their cherished careers are usable medias of activism, and ought to find manifestation both in the office and on the streets.

Please note that this has little to do with President Museveni. I argued last week that Uganda needs—and will always need—a politically conscious and ready-to-protest public.

Under any dispensation, democratic or authoritarian, protests and demonstration should be seen as a core part of a civilised order and thus the need for a public that is cultivated to this patriotic initiative.

This is why, the framers of the 1995 Constitution found it absolutely necessary to include Article 29 (1) (d), that is, the “freedom to assemble and to demonstrate together with others peacefully and unarmed and to petition.”

But how does one get a public cultivated into this ethic?

Again, as I showed last week, Mr Museveni has done wonderfully well in cultivating a politically ignorant and fright-struck public. With strategies ranging from brutality, market initiatives, to the seemingly benign ones such as removal of graduated tax in a peasant public, we—all of us, [but mostly folks in the mainstream opposition]—have been reduced to human pets.

Thus, the decision for persons with public profiles or those with sumptuous platforms, with no claim to political party inclinations standing up is a necessary ingredient. They not only stand up for themselves, but raise the profiles of the streets.

1234
0 #31 Remase 2022-07-25 22:08
Meant to say chicken bought with taxpayers money. Did Nabagereka go to the daughter of Muhwezi's wedding to have a chance to eat chicken or to rub shoulders with a hard core criminal, Muhwezi?