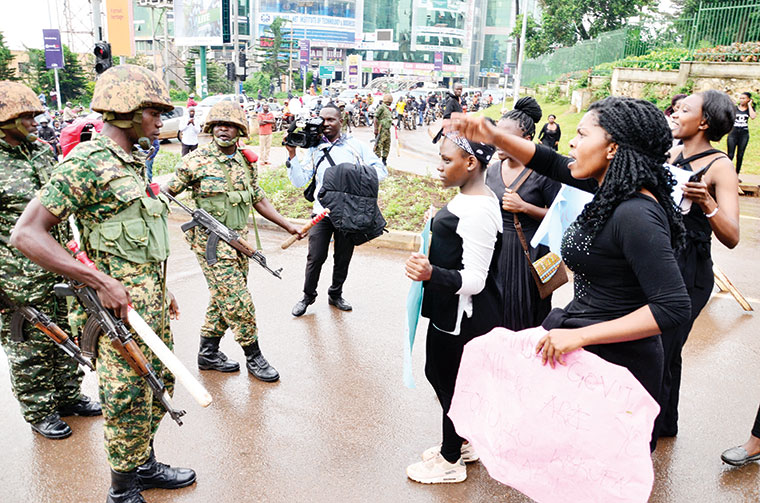 It is often painful when in the middle of the struggle against oppression and exploitation — be it colonialism or autocratic governance — a committed activist crosses and joins the oppressor.

This isn’t about comprador workers, or Uncle Toms. But, rather, foot- soldiers making U-turns. It is confusing to those who remain in the struggle against the same oppressors. It is demotivating. It is betrayal. “Why?” perplexed admirers of the defecting person ask in anger and disbelief.

Besides the open crossovers, there are other sotto voce defections where former anti-establishment activists simply coil their tongues. They domesticate their hitherto radical criticisms and become gentler to the oppressor, bordering on collaboration.

Take for example comrade Nobert Mao, our journalist friends, Chris Obore and Andrew Mwenda. Let me return this often-abused question: why do these undoubtedly brilliant and well-meaning folks turn around and join – openly or covertly – their oppressor and exploiter?

My contention is that this is neither about re- learning about the oppressors’ benevolence which had skipped your sights. It is neither about money, although it so explicitly and performatively appears as such (and often narrativized in those terms).

I know, Karl Marx has told us that our decisions are often a product of our material conditions. Something like, “the poor are easily corruptible.”

But a theory of material conditions isn’t a sufficient explanation especially since humans have the capacity to thrive under terrible material conditions. This is even truer when you consider the existence of nobler causes that go beyond materiality; things such as honour, legacies, religious morality, et cetera.

The material conditions become a terribly insufficient explanation. My contention is that although crossovers appear to be negotiated in the political marketplace, they are simply an indication of the expiry dates of an activist.

The men and women defecting to the oppressor are not bad, or greedy, or selfish. They have simply reached the end of their shelf-lives as opposition activists and politicians. Thus, money becomes the excuse; the distraction from a core component of political struggles: expiry.

Let me explain further. Opposition politics has a shelf-life in which the struggle has to be won. When this time expires before victory, the activist has to either die, go into silence, or join the oppressor. But since death and silence are the most difficult of the three options, normally, activists whose shelf-lives have expired, tend to join the oppressor.

Only during the anti-colonial struggle — and because of the nature of the struggle itself, being life-and-death — did strugglers choose death over joining the oppressors. Even then, comprador elitism thrived.

On the other hand, since the oppressor is bereft of any dreams beyond the façade of appearance, they will find value in procuring these expired products, just for the optics of it. But as are all expired products, no value is extracted from them.

I need to note that in using the terms ‘shelf-life’ and ‘expiry dates,’ I do not mean to denigrate defections and crossovers. Rather, I wish to highlight the problems with protracted struggles. Truth is, all good men are like utility products (be they industrial or organic); they expire.

If consumed in their time, they remain good for the consumer. But unconsumed within their time, they will definitely go bad and become dangerous to the entire eco-system. Please note that this has nothing to do with the product itself but, rather, its manufacture-use-allotted time.

Indeed, all the defecting folks would remain on the straight line were they to become victorious in their time. But the delay in victory pushes them to the extreme, rendering them expired and dangerous. Recall that throughout the period of struggle, the oppressor throws at his opponents innumerable trials and tribulations.

These range from violent confrontations to negotiable manoeuvres. For a period, the strugglers remain steadfast. But not beyond a particular point.

Indeed, like all products, some have longer life-spans than others. Blue Band margarine has a shorter shelf-life than Star bar soap.

Vehicles stay usable for longer than bicycles. So, you have a Kizza Besigye who will stay longer like a grader, and a Beatrice Anywar whose shelf-life is like that of a flower.

You have a Hussein Kyanjo who is like a vintage car — keeps its nobility throughout the generations — and Beti Kamya who is Sony television set. It is beautiful to watch, but the manufacturer gave it a shorter lifespan before it starts faulting its receptors. Again, nothing to do with the product but, rather, the time.

Why is this argument important? There are three reasons: (a) Ordinary folks have to beware that they are the only true stakeholders in the struggle for their emancipation. Just like themselves, the celebrity folks who tend to lead struggles are utility products with a sell-by date.

(b) Struggles have to be hastened to sustain the goodness of their strugglers. Otherwise, protracted struggles render players vulnerable as their expiry dates catch up with them before reaching the promised land. And with shorter shelf-lives in our present time, there is need for more urgency.

Finally, (c) there is need to constantly redefine and reshape struggles so as to renew/refurbish struggles and thus extend their sell-by dates.

There should be something very wrong with the nature of the Uganda people. The opposition will always self-destruct and Museveni knows how to play that game.
Report to administrator
-1 #12 Jama 2022-01-15 16:56
There ia another category which is programmed like robots by the regime to join the opposition.

These so called hard core regime critics later return to their master after the end of their mission.

Of course this pretended defection can't happen without Consequencs.It will leave the opposition fractured.
Report to administrator
-1 #13 Akot 2022-01-16 17:23
Quoting Lakwena:

Thanks Yusuf for your observation and graphical analysis.

But, if from your perspective political or activism flip-flopping is not driven/motivated by opportunism or material gains; is there such a thing as the expiry date for Ethical and/or Moral Value (Right vs Wrong; Just vs Unjust; Fair vs Unfair; True vs False and/or Good vs Evil)?

This is why Ugandans MUST end the tribalistic system, if they want chance to a different Uganda, share of their land riches & just live, while waiting for the end God has for all of us!

Even the British have lost sense of reality & are fighting their prime minister who took responsibility for everything, yet is being spat on by even his own party members!

Ugandans just help Museveni enslave them, own their tax money, while they keep him in power through the tribalistic system & they fight one another!
Report to administrator
-1 #14 Akot 2022-01-16 17:33
Lakwena,

Akot, out of Uganda since 1987, calling Ugandans to end the tribalistic system Museveni put i place & UNITE to end his rule, is an enemy!

How on earth will Ugandans get rid of Museveni & famil, when it's them ensuring the family business by all means?

Only a UNITED people can end dictatorship/military junta...& get outside help!

Not all Opposition players are fortune - hunters. they are a dispensable currency...

But you have patriotic people who joined thee struggle for purpose of serving the country to make it better for not only themselves but for the generations to come - : Besigye,Kyanjo, Nambooze,Lukwago, Ssemujju etc.

museveni & co are not leaders, they are 'fortune hunters, there is nothing good they have done for this country. and will never do anything good for Uganda- - only fortune hunters, unpatriotic/selfish/parochial/primitive individuals can join them.

Those who join the struggle as fortune hunters..., will jump the moment they fail to get victory at a particular time.

Yusuf , museveni has never done anything for Uganda.

500,000 Ugandands perished in Luwero, Homes destroyed, families destroyed, Education destroyed, schools and infrastructure destroyed, livelihood shattered - 35 YEARS -Luwero is still shattered and instead those who remained are being thrown off their small plots.

35 YEARS, the mindset of museveni is still kill and destroy. So whoever joins him is cursed and is not a Ugandan at heart. I hope history will absolve me.

The tribalistic system down & UNITY are all Ugandans need, or Museveni & family are going nowhere!
Report to administrator
12