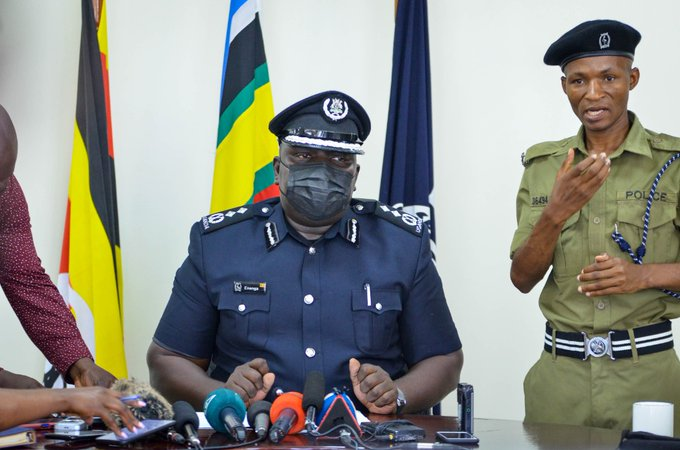 There is a well-known story, often told in whispers, of a former spokesperson of the Uganda Police Force who actually held a thanksgiving at his house after being demoted from the job.

In his thanksgiving speech, those who attended narrate, the good officer rejoiced in the demotion, calling it “being released from the gallows.”

While public relations officers tend to enjoy the limelight selling or explaining their products, doing police PR must have been hell for this man. We may never know whether it feels the same for the current holder of that office.

The story continues that because there was mutual understanding of pains of his job — being calm when telling obvious lies on national televisions — his hearers laughed rather hysterically even when he tried speaking in parables. Incidentally, this man is a good Christian.

But the nature of the job required openly and publicly turning Christianity’s cherished values upside down. The priest who presided over this thanksgiving welcomed him back to the fold of good Christians imploring him to cry out to the Lord for forgiveness.

Please do not ask whether this man has young adult children; of course he does. Did he have a wife? Of course he did. This was the more painful bit. But all these loving souls around him had to find meaning in the contradictory life of their God-fearing paterfamilias.

Well, I guess he told them, “those lies put food on your plates, and was God’s design.” Amen.

It is well-known but often unquestioned and a non-problematized fact that the biggest sources and shameless vendors of fake news are governments. There are modules in the public relations courses on deception, otherwise called ‘propaganda.’

How to manufacture and efficiently disseminate lies. Local political theorist Tamale Mirundi has been discussing NRM propaganda in his many talk-shows and pamphlets. But sadly, because of his ragtag public identity, listeners pretend not to take him seriously. But he has never been wrong.

While all governments are in the business of telling lies to their publics, the practice is worse in poor countries with auocratic governments. While more sophisticated media in wealthier and more liberal countries try to call out the bollocks of their government (depending on their editorial leaning, of course, media in impoverished autocracies is overwhelmed by structural, political and personal challenges.

Government lies are rarely challenged; instead they are broadcast verbatim. And because the state will enforce them with threats and oftentimes outright violence, they go unchallenged. Sadly, however, these governments are also ready to kill, jail or simply character assassinate innocent folks on the basis of their lies for simple political ends.

Have you not seen how the Ugandan government is overdoing itself maligning a 1,400-year-old religion as committing terrorism attacks against pork eaters – for their pork eating! Innocent pork-eating! Or that Muslims are the same people murdering their scholars on otherwise petty differences?

But how, then, does one know government lying machine has started rolling in a particular political moment?

Normally, it begins by generating anxiety either through a tabloid or mainstream media house outlet. Although this is often the work of online outlets, government mouthpieces are usually deployed too.

Recall the coincidence that pork-hating terrorists chose to attack an obscure pork joint the same day Bukedde newspaper profiled it! Wasn’t that so obvious? But that is the game.

It is a familiar script: recall when the American government also told the world they had “intelligence” that there were “weapons of mass destruction” in Iraq? Well, they were telling lies.

Pressed to explain their intelligence sources, government spokespersons respond that “that information is classified." Have you not heard Baryomunsi of Haruna Kasolo bully panelists that he is speaking from classified sources? In truth there is nothing. Pressed further, Baryomunsi will patronisingly advise inqusitive interlocutors to “take any information they have to the police” or “go to court,” if they feel unfairly treated. All logic is lost for a show of power and “being in power.”

For Afande Fred Enanga, his key words are “investigations.” There is always none. Because the state is often assumed to be working for the common good – although essentially works for those in it – their crimes are investigated on end.

They commit crimes after investigations or promise to investigate their crimes. As everyone in Uganda knows, nothing ever gets known about these investigations.

The classic lie is sacrificing individuals in cases of state sanctioned abuse. “Individuals make mistakes.” Or the standard line, “There are a few bad apples.” If officers opened fire on protestors as happened in November. 2020, or chased and beat up journalists with newly-minted cow-herding sticks, these were orders from above. The scale says it all. But to deny accountability, a few individuals are sacrificed.

The closet to “bad apples” is “pivoting,” and “trivialising,” which involves switching attention to opposition politicians, instead of those in office.

Surely, the plotters of November. 2020 rode on Mwenda propaganda. Not once, serious issues are discussed like they were family or an individual affair: “Are you democratic in your house?” Or “Have you not abused power before by say speeding where you aren’t allowed?” they would challenge.

It sounds smart but is sheer trivialising. These cues are then repeated endlessly.

So, in a sense, as opposed to the truth setting them free, the lies and lying actually keep the poor men and women in perpetual bondage.

It is sad that the very people who are sworn in to serve the country using their favourite religious books end up setting records with the biggest and most unbelievable lies ever.

Some even have the audacity to claim wide-eyed, without proof, that they were chosen by the Almighty to lead the country! Who do those buffoons really think they are fooling?

We all know why this government is so afraid of the naked truth: the whole NRM survival apparatus would collapse in a heap, with hundreds ending up in jail, others may become wanted fugitives, constantly on the run.

Lying always tends to have a beautiful ironic ending – the truth. For those in the habit of lying through the teeth, don’t say you were not warned.
Report to administrator
+6 #2 Lakwena 2021-12-01 10:23
Thanks Yusuf for echoing out that: the government and especially ours herein, under the Sly, Vile and Fiendish leadership of a Consummate Liar, Author and Master of Violence, Gen Tibuhaburwa; is an EVIL INSTITUTION.

In other words, Ugandans trust and rely on the current government at their own Risk and peril. This more so after Blood Tibuhaburwa told them off on 26th January 2017, that they (Ugandans) are mistaken if they thought he is their Servant or employee.

Wachireba?
Report to administrator
+6 #3 Lakwena 2021-12-01 10:29
As for Afande Enanga, like the adage for Diplomats; Enanga is now a fattened honest man, telling lies (lying) on behalf his bloody government (a Diplomat is a Honest Gentleman/woman, who tell lies on behalf his/her government).

In other words, Public Relation is a False Relation.

Wachireba?
Report to administrator
+5 #4 Uncle Philosopher 2021-12-01 12:57
The difference between a lie and the truth depends on the perception of the receiver and the voice of the teller...every day we are presented with contrasting facts and it's not easy to distinguish between the right or false .

And without more information, we can be easily swayed. That is propaganda. Where the one who can easily present his side of the story convincingly becomes the truth teller.

That's where the spin masters have failed and they will always be regarded as liars .
Report to administrator
+3 #5 Kalibbala 2021-12-03 22:04
"He who cannot be a good Follower cannot be a good Leader." and "Wise men speak when they have something to say, fools speak because they have to say something!" Rhetoric like " If you insert your Finger in the Anus of a Leopard!"
comes from One self-made Almighty Chosen by God(in Banana Fiber) to Rule Uganda!!

Lies have been the Only way to sustain the Status Quo! Once it was Fighting Idi Amin , Then Obote and his UPC Today it is Muslims belonging to ADF!..The Curse who is on Kyeyo in Uganda is bound to Pack his Bags and Enjoy his Millions stashed away on Accounts in Bahamas and Panama! Enanga will remain with us enjoying his Pig ears at Digida Pork Joint!That is Life!!
Report to administrator
+6 #6 Lysol 2021-12-04 08:55
Uganda is being ruled by corrupt, killers and pathological liar idiots. Period!!!
Report to administrator
0 #7 Henry Baisi 2021-12-07 19:50
@Kalibala, "Almighty Chosen by God" my friend Baguma told the right words are "Gods Punishment for Uganda". Prayer my dear man!
Report to administrator