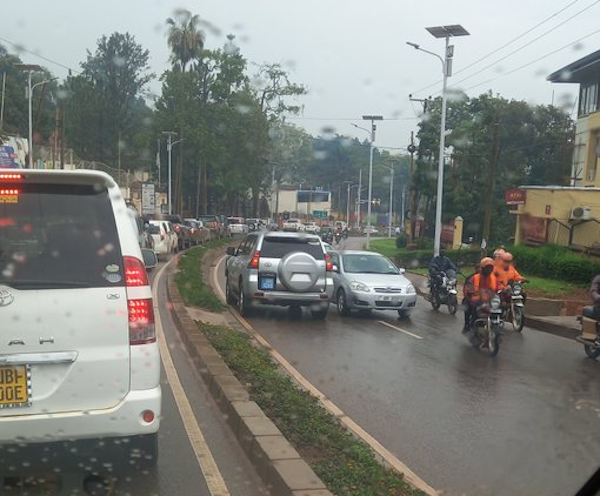 A government vehicle driving in the wrong lane

Last week’s news was dominated by the event of a passenger selling grasshoppers to fellow passengers on Uganda Airlines.

There has been as much condemnation/ cursing as the humour that has been generated out of it. You know, in Uganda, a story is not complete without humour. It has become the most popular therapy in our helplessness.

Away from judging whether the act was acceptable or not, after taking my own turn at making fun of it in a cartoon, I am wondering why it even had to concern us. Was it out of the ordinary?

My wonder is: with all else that has been normalised in Uganda, from the top office to the every day, did this have to shock us? Over the weekend, I talked to a group of young people who were graduating as a cohort of Friedrich Ebert Stiftung’s Youth Leaders Programme.

Here, I had a brief chat with Isabella Akiteng, a renowned activist. We wondered how we as citizens have come to this point where we laugh about everything, and how this could be symptomatic of a bigger problem.

She wondered: doesn’t it worry the president that despite all that Ugandans have gone through, they are still visibly happy? I wrote here before, that when you see a bereaved person acting normal and indifferent at a funeral, anticipate that they will moan later.

Coming back to the nsenene saga, I think only visitors would have the permission to be shocked and outraged. Uganda has seen, and is still seeing more that we no longer talk about, which in a normal country would be more enraging than nsenene hawking on a national carrier – regardless of whether it was a joke or reality.

In a country where on every government project involving huge sums of money we know it almost for sure that theft scandals will follow, and that the culprits will walk away smiling, what is the nsenene story to shock us?

Where the certified corrupt are recycled in cabinet positions and they have the audacity to smile at us on national television, do you think normalcy means much to us?

In a country where the president appoints his wife as minister and the son as de facto commander of the army, and all that is deemed normal, what is abnormal about a man selling nsenene on Uganda Airlines?

If it is okay to have a minister, who, in virtue of her marital connection to the presidency, cannot be held accountable even by the prime minister; what can’t be okay? Where it is okay for a president’s son and serving army officer to tweet irresponsible statements but remain above official sanction on account of his parental immunity, what is awkwardness for us?

In a country where an election is stolen in broad daylight and whoever seems to threaten the mischief is arbitrarily picked up to unknown places, what would a nsenene story do to our numbness? Where it is okay for internet to be switched off for a full week because an election is going on, what is not okay? I need more conviction to feel shocked.

At an airport where only the president’s posters are allowed during campaigns and one could even lose their job for questioning this, why not hawk nsenene onboard too? Isn’t it about stopping pretending about our madness?

Wasn’t the vendor simply following our long list of examples? We should as well encourage other hawkers to take advantage of that lucrative space. Allow our herbalists to walk through the aisles before take-off, advertising, among other things, manhood concoctions.

In a country where you visit a public office and find a bunch of incompetent people speaking the same language, what is abnormal? Where it is okay for someone to run their yoghurt business at their office, what are you angry about now?

Is it strange for us to find someone selling liquid soap in a public office that has nothing to do with soap? Is it news to us that random vendors will walk into offices to sell clothes, makeup, electronics, etc?

In a country where it is okay for Umeme to charge us service fee even for months where we have not used their services, at least the aircraft nsenene vendor is fair – he was selling something. Where farmers are almost left on their own to experiment with whatever herbicides and pesticides on the food that ends up in our markets, what else should matter?

In a country where over 1,000 boda boda motorbikes can be left for years to turn the capital city into a total traffic nuisance without any official bother, why should we allow order on our aircraft?

Why exempt them? Where one is allowed to drive a private car with the image of the president occupying where a number plate is supposed to be, and not be touched by any traffic officer, what do you have to preach to us about standards?

In a country where driving a government (UG) car means that you have more rights on the road than other taxpayers, and that you can drive roughshod on any lane or pavement to bypass others in traffic jam, what can you tell citizens about order?

Just enjoy the privilege of your sirens as we accept to be pushed off our roads as though where you are going is more important than where everyone else is heading to; and let the man sell his nsenene on board too. No one should claim monopoly over madness.

How do people get rental space in that ‘duty-free’ area at the airport? Who occupies those strategic shops, and how? Where can information on renting that space be found by every citizen? Have we disturbed the peace with which you allocate them? Let us sell our nsenene onboard.

Where ex cabinet minister will be bought new cars when there are no medicine in the government national referral hospital
Where goons take over prime land and can't show evidence of acquisition of said property.

A country where court releases people and rear rested by goons and taken to private prisons..
The list is endless
Report to administrator
-8 #12 Wante Martino 2021-12-02 10:19
Spire, the issue here was NOT vending nsenene but the way the fellow was doing it and packages he was using, added to the commotion it caused!

Rather, tell me which Airline world over allows vendors on Board to sell what ever they want then we can agreed. The vending is always done by Crew to serve some teas and some eats, right??
Report to administrator
+14 #13 Kelly 2021-12-02 12:41
Wante Martino,
You seem not to have understood Dr's sarcasm and rhetoric. What is more abnormal?

Selling Nsenene that way on Uganda Airlines or stealing GAVI funds, confessing about it, being convicted and later the person who confessed is appointed a minister? Dr is simply asking us to define what is "abnormal" in Uganda!!
Report to administrator
+10 #14 Kelly 2021-12-02 12:45
Wante Martino,
Tell us in which country a president, his brother, wife, son, daughters, son's in law, entire village mates hold key positions in government from heading an ubiquitous, illegal and vampire pseudo entity called Operation Wealth creation whose expenditures are never queried by the AG, to individual recruiting personal army which is treasonable and the president defends that "those are home guards"?
Report to administrator
+3 #15 Akao 2021-12-03 01:00
3- Any sane person in any other country wouldn't understand this country where a large section of the population has been turned into morons.
.

This to me is the comment of the century. The dictator knows all will bore down to him, becuase 99% of the population don't have ability to see Uganda beyond the dictator.

I ocassionally read trending topics in Uganda on social media, and just shake my head on how most responds
Report to administrator
+5 #16 Lysol 2021-12-04 08:50
I used to know someone with a PhD in Entomology, but he traded that with being an intelligent officer in the corrupt killer regime, instead.