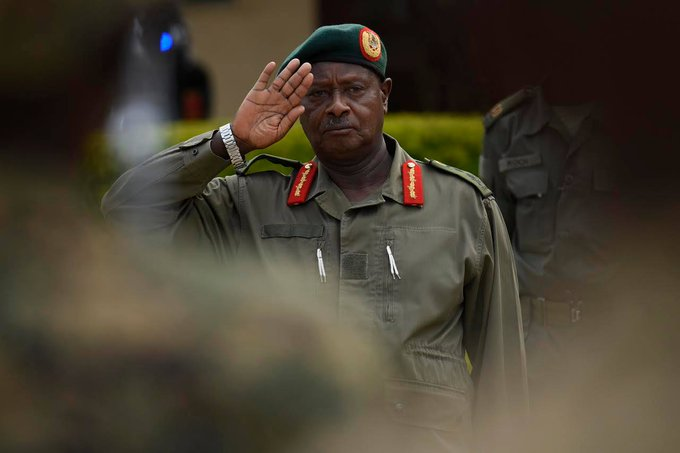 President Yoweri Museveni’s Saturday address to the nation on insecurity and anxiety gripping the country was wishy-washy.

The President has maintained that the masterminds of last week’s twin bombing in the city are the same group of radicalized Muslim youth that once attempted to kill Gen Katumba Wamala on June 1. He advised the rebel Allied Democratic Forces (ADF) to surrender or they will be killed.

Was this an act of amnesty or an outright order from the victor to the villain? It appears the president does not believe in amnesty anymore. He said that slain Sheikh Kirevu was out on amnesty but he abused it. But as the President spoke tough, he couldn’t hide his frustration with his most funded security agencies!

“You know our security people are always asleep most of the time, but when you provoke them they wake up,” he said.

This was a serious vote of no confidence in the security forces. There are several security agencies in the country: Uganda Peoples Defence Forces (UPDF), Uganda Police Force (UPF), Internal Security Organization (ISO), External Security Organisation (ESO), the Chieftaincy of Military Intelligence ( CMI) among others.

So which group is specifically lax and thereby putting Ugandans lives in danger? The President said the key issue is to use intelligence to uproot these terrorists in our society.

Why is the intelligence sleeping on the job? And if yes, why hasn’t the president taken punitive and corrective measures to iron out this malady!

The laws governing security agencies such as the UPDF Act can come to the president’s aid. For instance, section 19 of the UPDF Act provides for the punishment of a person subject to military law who either willfully or through neglect disobeys a lawful order.

He or she commits an offense and is liable on conviction, where it results in failure of operation or loss of life, to suffer death, or in any other case is liable to life imprisonment. The problem with the intelligence services is that some elements in those agencies have turned to extortion instead of detecting crime.

There is also a complaint that much as security budgets are huge, the foot soldiers who are supposed to mingle with the ordinary people to pick intelligence rarely get the resources needed to do their work.

The bulk of the money remains with the ‘top dogs’. In a way, the apparent success of the terrorists especially in the urban areas has exposed the incompetence of those ‘top dogs’, if not corruption.

Proper intelligence should have informed the president on what can be done to stop the radicalization of the youth. There is also a worrying trend of pitting Muslims against other faiths in the country.

Almost all those who have been killed or arrested in relation to terrorism are Muslims. Army spokesperson, Brig Flavia Byekwaso while addressing a press conference at Naguru in the aftermath of the attack on the city, said some terrorists who were Muslims had been found with rosaries disguised as Catholics.

This kind of polarization in faith would not earn government the cooperation it needs to stamp out terrorism. The intelligence services need to cooperate with the wananchi.

If the citizens feel stigmatized, polarized, and profiled as terrorists, the intelligence gathering that is so crucial in this fight against terrorism will not succeed.

+1 #1 Lakwena 2021-11-26 13:14
But Editors, Gen Tibuhaburwa came to power through crime, being the Rule of Lawlessness, alias indiscipline/wrongdoing.

Therefore, admittedly; how can a wrongdoer (indiscipline CIC) discipline the armed forces trained in wrongdoing (“You know our security people are always asleep most of the time, but when you provoke them they wake up,”)?

In other words, crime and indiscipline in the Armed forces is functional for Gen Tibuhaburwa. Otherwise, what would the sleepy heads wake up to do?

It is the same story for MPs, whom indiscipline Tibuhaburwa does not mind them sleeping in Parliament, so long as they wake up to vote in favor of his Rule of Lawlessness.

Wachireba?
Report to administrator
+1 #2 Lakwena 2021-11-26 13:55
In other words, Mr. M7 is so wicked that: he blackmails the officers who have committed human rights violation on Ugandans into "absolute loyalty",

Else he will leave them to the wolves.

E.g.
1. Without absolute Loyalty, after the Nov 2016 Kasese Massacre (Genocide), what is the fate of Gen Peter Elweluwhat?

2. Without absolute Loyalty, after the 18-19th Nov 2020 Massacre (genocide), what will be the fate of the soldiers, Bloody Tibuhaburwa told Ugandans about; that he knows who killed (pulverized) Boxer Zebra in a hail of Sub-machine-gun bullets?
Report to administrator