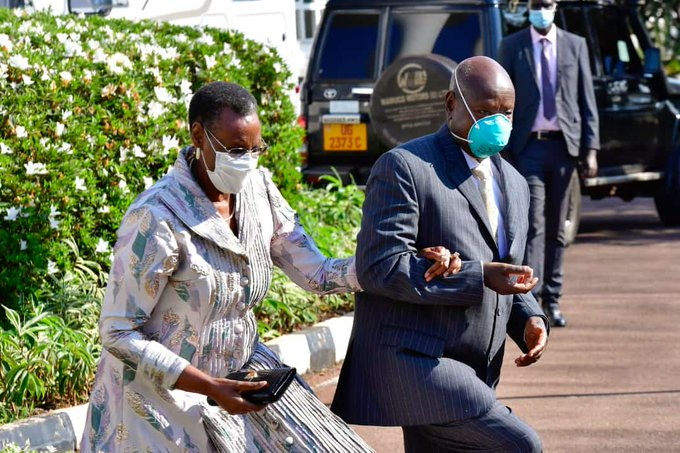 You will be droned away... You will be kidnapped and dropped in some septic tank. Bwolaba drone dduka (Whenever you see a drone, run). You won’t get a job. No employer would want to associate with you. Your piece is too satirical. Wesigaki? Gwe ani? (Where do you get the guts from? Who are you?)

If they don’t kill you, then they will buy you off. Watch your back. Careful. Switch off your phone and shift. Change your line. I admire your courage but this is too dangerous.

Such is some of the feedback I have been receiving to the poem I wrote on October 3, 2021 and shared on my social media platforms under the title: “I want to be Museveni’s side chic”

On October 8, 2021, I got a call from the deputy director general of ISO, Lt. Col Emmy Katabazi. He wanted to have a ‘chat’ with me about the poem. Together with a friend, we met him on October 9, 2021 and had a lengthy conversation.

Contrary to the fears, I wasn’t droned or arbitrarily arrested. While I am happy that I was not tortured for my writing like was done to Kakwenza Rukirabashaija and Stella Nyanzi, this got me wondering whether this is a change of heart or just a different strategy.

I appreciate the dialogical approach and civility he used and wished they used the same on other opponents, and by the same spirit freed political prisoners. I wish more attention would be put on fixing the concerns raised rather than individually ‘sorting’ the messengers.

On the need for leadership change in Uganda, we agreed to disagree. I also asserted to him that the risks notwithstanding, I won’t stop writing. I won’t get compromised into silence. In fact, after this meeting, I felt more determined to continue writing and sharing my thoughts because I learnt that the powers that be are watching the space. I owe this to my country and to generations to come.

We should always be able to engage and differ without violence. We can always have alternative views without fear of being kidnapped. We can always write without the fear of censorship. We can always treat the real disease instead of busying with fleeting symptoms.

We can always turn down offers without having to worry about blackmail and labelling. We recently celebrated 59 years of independence. I am convinced that we can do better than we are now if Independence is to have real meaning beyond commemorating an event.

In case you missed the said poem, it read:
…
I want to be Museveni’s side chic

I want to be Museveni’s side chic so that during those cozy moments, I tell him that the thought of schools still closed turns me off. I want to let him touch, touch me slow and then when he’s charged for action, I tell him that the education crisis dried my feelings. I can’t even fake anything. I want to promise to do him all he wants as long as schools are reopened.

I want to be Museveni’s side chic so that when he asks me what car I need, I ask for an ambulance instead and give it away to one of the hospitals. I want to start using the money he gives me as a sugar daddy to do give-back activities to the community. I know how to make reusable pads; I could get enough capital to make this social enterprise grow and benefit many a girl child out there.

I want to be Museveni’s side chic so that when we go for a weekend getaway to graze cows, I sweet-talk him into having all the political prisoners released. I want to remind him that those young men who were unjustly arrested have families to whom they are so dear just like the way his cows are dear to him.

I want to be Museveni’s side chic so that when he buys me an unlimited data bundle, I thank him and then request him to have the 12 per cent tax on data removed. The world is advancing in science and technology, we need to advance with it z-daddy.

I want to be Museveni’s side chic. I want to kiss his ears, gently squeeze his nipples and whisper to him that that boy on Twitter keeps embarrassing the family every time he gets into keyboard exchanges. Z-daddy, maybe you should reconsider opening bars too.

I want to be Museveni’s side chic so that after reading a poem for him, I tell him that censorship, arrest, torture and imprisonment of writers is inhumane, cowardly act and violation of rights. Ekaraamu tejunda muzeyi. You may imprison the people but you can’t imprison the spirit of writing.

I want to tell him to take the writings as a challenge to make improvements for the betterment of the nation. I want to be Museveni’s side chic so that I shower him with praises as the sexiest z-daddy when he agrees to have a peaceful transition of power.

We need to go somewhere in the mountains and spend quality time as someone else able takes over the presidency. There are many men and women with a vision, you ain’t the only one with a vision, sweetie. Give the bazzukulu a chance to build the nation.

Let us go plant trees, restore Bugoma forest and save those wetlands and other endangered natural resources. I want to be Museveni’s side chic so that I tell him what I can’t put here in writing. I am unarmed, harmless, sexy, energetic, charismatic, patriotic and ready to read for him in retirement. Whoever can reach him, give him this proposal of a side chic in waiting.

Yours in struggle, Ashanah.

The writer is a human rights activist

+15 #1 Lakwena 2021-10-13 08:02
In other words Annah Ashaba, although Afande Lt. Col Emmy Katabazi may have let you off the hook; but it does not mean that Her Majesty, Kataha above, will not get you kidnapped (Droned) and your pretty finger nails plucked off, one by one with a pair of pliers and thereafter you are eft for dead along the lonely and dark Entebbe Express Way.

Otherwise, thank you for expressing your gut feeling. And I bet my chai mukalu and chapati, your poem has hit the power that be in the face.

In other words, watch your back: the kawukumi (parasites) idiots and zealots in our State House will never forgive you for this.
Report to administrator
+8 #2 PaulM 2021-10-13 11:21
Wow. You are a very courageous woman and a very creative writer. Finally Stella Nyanzi has got her completion, her "mujja".