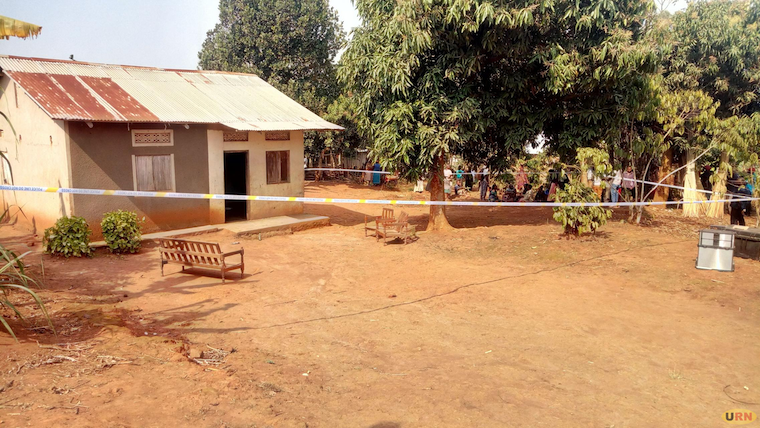 A scene of crime of Masaka killings

The mysterious murders and indiscriminate attacks on helpless persons, more-so, the elderly have horrified the country and baffled the police.

Days have gone by without an arrest of a credible suspect. The minister of Internal Affairs, Maj. Gen Kahinda Otafiire is equally confused. He can pinpoint a motive for the murders.

“The murders are not motivated by proprietary gains since nothing is taken from the victims. However, criminals in some few incidences use snatched phones of victims, to communicate to the relatives of the victims. Whatever the motive, the intended effect is to cause fear, terror and apprehension in the public.”

The killers always hit the victims on the head with blunt objects. The killings are also indiscriminate. The pattern of the killings is also similar i.e the timing is mostly between 20:00Hrs-22:00Hrs. They way lay their victims and, or attack vulnerable people in houses,” Otafiire explained in his report to Parliament last week.

If the security agencies have failed to establish the motive then who can! If the motive is not proprietary, then what is it?

In one of his earlier populist speeches in the 1980s, President Yoweri Museveni told district administrators and police commanders that he would not preside over a country where a Ugandan is killed and the authorities do not know who has done it.

“It will not do (work) for you to be a DA (District Administrator- RDCs) in a district and people are murdered and you don’t arrest the murderers. It will not do (work) to be a district police commander and people are being killed in your district and you don’t know what is killing them. This will not simply work. I will not accept it. I will not preside over a country where a Ugandan is killed and the authorities do not know who has done it,” Museveni said to a tumultuous hand clapping by his audience of security heads.

"I will not preside over a country where a Ugandan is killed and the authorities do not know who has killed them." ~ Museveni, 1989.

Now it's the authorities killing us as they please, under his command.

If hypocrisy was a person. 👇🏾 pic.twitter.com/tLgZYd5p3V

The DA (now RDCs) are the president’s representative in the district and head of security. The panga wielding killers have prowled the villages of Masaka, preying on mainly the helpless poor and elderly persons, terrorizing the area.

Security agencies are only speculating and it appears they are not about to break the murderers’ code. Worse still, these kind of attacks are slowly spreading to some parts of the country including Nansana (Kampala) and Jinja districts. The Observer believes the president has not given up on finding out who the killers are.

We have DISO, GISOs, Local Defence Units (LDU), police (this has crime detectors, investigators) and, Crime preventers among others. The country witnessed massive deployment of regular soldiers, LDU, military police, ISO, CMI, counter terrorism and other undercover operatives to ensure the opposition does not attract crowds around them during the recent general election campaigns.

The country was being saved from the spread of Covid 19. How ironic that in areas where people have been attacked with pangas and gripped by fear of the unknown, there is less or no equivalent heavy deployment! The President owes Ugandans a satisfactory explanation. For the country gave him all the resources to ensure the safety of all Ugandans.

1. “I’m not an employee. I hear some people saying that I’m their servant;

2. I’m not a servant of anybody. I’m a freedom fighter. That is why I do what do;

3. I’m fighting for myself, for my belief; that’s how I come in.

4. If anybody thinks you gave me a job, he is deceiving himself. I’m just a freedom fighter whom you thought could help you also.”

you are asking the wrong person.

In other words, you are asking the right question to wrong person.
Report to administrator
+1 #2 mousa kiritukawa 2021-09-09 13:09
In one the Bantu languages the security agents are called 'Abarinzi bintebe' literally translated as protectors of the seat.


Going by that meaning the RDCs, UPDF, DISO GISO LDU, ISO CMI, Police etc are for that purpose. Other things are not important to them
Report to administrator
-2 #3 Wainanchi 2021-09-09 18:49
Do not ask for that the president.Look around yourself and check around If you spot someone call the police or army.

The president is not omnipresent.Get out assemble your friends get yourselves armed with machetteand bows and arrows and chase killers

Remember famous JFK saying
," Ask not what I can do for my country buy what you can do for your country".

President Museveni is not baby sitter to solve anybody's personal problems or security
Stand up and defend yourselves, your neighbours and your country

If I were the Government I would put random notice and pay 20.000 shillings for each killed machetre assassins.

The Hunt us on ! Wake up Ugandi! Stand up Uganda.Terrrorists are killing our brothers and sisters The president cannot defend each and everyone but you can if you do not sleep, if you are not organised and if you are afraid and run and leave your friends at mercy of terrorist killers
Report to administrator
+1 #4 wante Martino 2021-09-10 10:43
What disturbs me most is that 28 people were killed with NO arrests being done, in Places like America, just a child getting lost for one day, everybody will be out helping, but in Uganda, the Police/Army first ask for money/facilitation, what a mess!
Report to administrator
+2 #5 The Ugandan 2021-09-10 16:57
It is none other than him, the man has been on a killing spree since the 60's.

The refugee has killed many Ugandans and still does so with never seen before brutality in Uganda, together with his brother and son.

Unless we get rid of those dark hearted foreigners, we will never have peace, they feed on spilling and drinking human blood.
Report to administrator