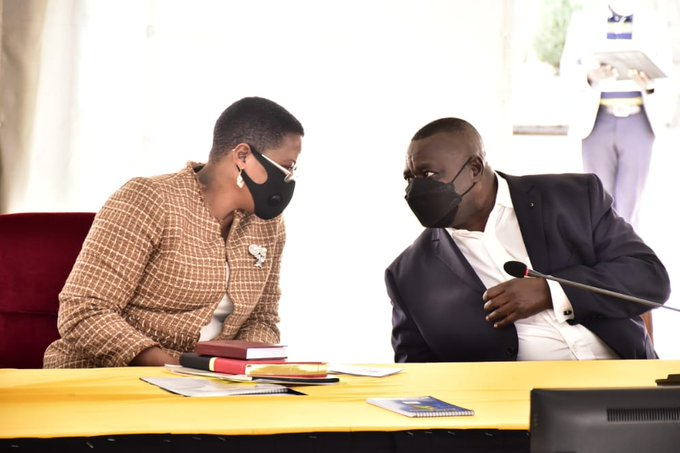 To our friends in the opposition, how can we explain over 90 opposition MPs in our shiny new obese parliament and the opposition candidate for the post of Speaker of Parliament only manages a weak 15 votes?

Who bewitched you naye? Who knows what happens in your camps during the cover of darkness? For us, we speculate that the opposition and the NRM are mirror images.

While one must look at a race and pick a winning horse, we also understand that winning is not always the end game.

Sometimes, it is about solidarity especially when you are outnumbered. Of course, you have your justifications, your grievances - this one abused you, the other one snubbed you, the other one did not attend your cousin’s, wife’s, sister’s, boda guy’s, uncle’s or grandmother’s burial.

The other one moves with bodyguards, has handlers pick his calls, your WhatsApp messages (even blue ticked) go unanswered even though YOU CAN SEE HE IS ONLINE and even participating in a mutual group conversation. Even President Museveni still sneers at the very idea of opposition, he once promised to chew you like a succulent samosa.

Another time, he said he would put the opposition six feet under. Then the people on whose behalf you are opposing troll you endlessly. The comments section on your social media feeds regularly sends your hopes down a dark hole of premium Ugandan resignation.

In another corner, a prominent opposition activist openly ravages fellow opposition members. More urgently, as a member of the opposition, you are a moving target. The state security forces watch you like an apex predator circling a clueless hapless fat chicken zungaring on Kampala road mbu you are protesting again.

The security forces grab you and your miserly troop of 9.8 protestors. They drench you in the latest teargas Ugandan taxpayer money can buy. You cough and splutter, descending into a chocking mess.

Rough hands lift you off the ground from whence you sought refuge. The hands, uncaring and eager for violence, throw you onto the back of a battle-hardened police patrol truck. Still spluttering from the teargas, rough boots kick at you, stomping on your bits, pushing you under the seats on the back of the truck. Brutalized, cowered; you are lower than Kampala’s street dogs.

Perhaps in that moment, you ask yourself why this life of torment attracted you as a young activist brimming with indignation
at the injustice around you. You thought you were ready for the full onslaught of the regime against you.

Now under that seat, in pain, you reflect. There was gundi, he was like you - then he started avoiding you. Before long, rumours were flying that gundi tired of the brokenness and brutality of his opposition life, settled for the fat juicy luxurious goodies the regime dangled in front of him. Weren’t you also Ugandan?

Didn’t you also deserve a nice life, free from harassment, teargas, scorn and the increasing probability of maiming? Or death too? But we are African, we do not invite death, even thinking it is not welcome. You might be bailed out or you might spend the next weeks, months, years languishing in the state’s custody.

If or when you get out, you learn that people have moved on. You carry your anger visibly, people start avoiding you - you are too angry, always talking about politics sijui peaceful transition. You tire us, exhaust us with your pain.

Indeed, you are too much, people have moved on. You are a constant reminder that the glass shards we are pretending to sleep on are pretending to be pillows. Leave us, we have chosen the ‘safer’ way of resentment, we keep our heads down and lament.

As you stew in your anger and disappointment in the people on whose behalf you oppose (some remind you that they did not send you, they are right), you watch the social media frenzy over the race for the speakership. The opposition also has a player in the race.

Everyone knows your firebrand candidate cannot, will not win. You, too, know your candidate is going to lose. What you do not anticipate is how badly your candidate will lose. You know math, the new parliament has 109 opposition MPs out of 529 MPs. Yet your fire and brimstone candidate only garnered 15 votes, why?

You want to explain, need to explain but cannot. You speculate that many opposition MPs needed to go to the toilet at the time of voting and so could not vote.

You tell yourself this because the truth that opposition opposes itself is much too bitter. Like the African who does not think of death because death might hear and fetch you - you push away those disturbing thoughts of your bitter fractured opposition.

The author is a retired muzzukulu

In other words, dishonesty rules. For the love of money, it is dehumanizing to learn how treacherous we can become.

Because wrondoing works, no wonder even as a Head of our Problem of Africa, Author and Master of Abduction and Violence, Gen Tibuhaburwa takes pride in Guerilla Tactics (crime) in whatever he does .
Report to administrator
-3 #2 Omuzira Ente 2021-06-04 15:10
The writer of this article is not well informed about the function of Parliament and needs to understand issues before pausing uncalled for questions.

Its common knowledge that the post of Speaker and deputy have to go to the party with majority in Parliament and what the opposition did was the best option of supporting one of the NRM candidates other than ganging to vote for Semujju or Nsibambi whose candidature was not even floated by opposition as they came on individual merit.

Hon Semujju is a mere journalist who lacks knowledge on Laws which background even makes him unfit to be a leader of the opposition thats is why he just a party spokes person.

Having chosen a man to be a speaker any sensible Ugandan would know that the position of a deputy speaker was for a lady and if the opposition had a female candidate for the post of deputy then you would accuse them and this explains why the likes of Nsereko who was fit for the post could not be voted because of the gender
Report to administrator
0 #3 kabayekka 2021-06-06 06:47
Of course no one bewitched the opposition of Uganda. They know and love what they are doing. They are political professionals at their job.

That reckons that if you cannot beat them join them. Fortunately for the State of Buganda, the order of the Lukiiko of Buganda made some years back for the tyrannical central government of Uganda to move its business away from the soil of Buganda still stands to this day!
Report to administrator
0 #4 Gilbert 2021-06-06 20:54
Some activitists who are jobless are busy buying buildings in kpla and you Wonder where they fetch those monies
Report to administrator