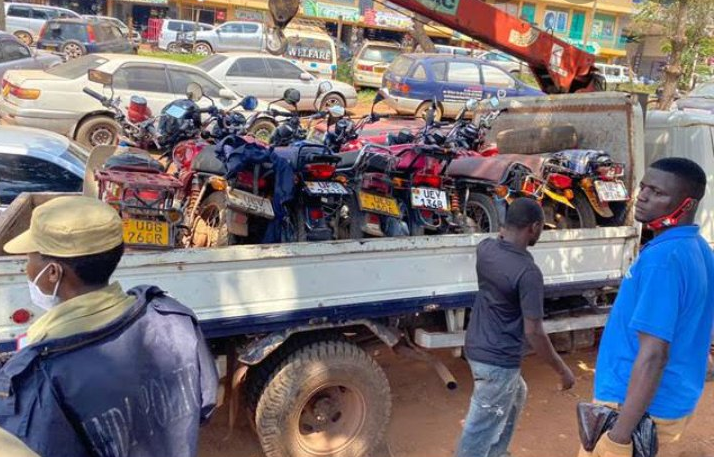 Some of the impounded boda bodas

There should be no debate that COVID-19 is real and a real killer in Uganda. It is incumbent upon everyone to practice the given SOPs so as to keep everyone and our economy alive.

However, there is a lack of honesty! I personally blame the inspector general of police and ministry of Health permanent secretary Dr Diana Atwine for failure to control the surge of the virus.

The very people who are supposed to champion the fight against the spread of this disease are the very people making it look like a joke. The IGP either has other priorities, or he has blatantly failed to watch over his departments.

Every time the country thinks of tightening the noose regarding SOPs, police rushes to the boda boda men. Carrying passengers in the night according to police seems to be the fastest way COVID-19 spreads.

The president can announce the need to tighten the noose and then in two hours, police will share pictures of hundreds of bodas impounded with a charge of likelihood of spreading an infectious disease and defying presidential directives. Impounding of boda bodas apparently seems to be the main key performance indicator police has to show if it is enforcing COVID-19 SOPs.

Amidst all that, some prominent bars are open till morning and people flocking in and out, and some even hosting government officials shamelessly driving government number plates. To make matters worse, the entrances are being guarded by police officers.

Now, I want the IGP to tell Ugandans, who orders these deployments? When I talk of the IGP, I want to include the deputy IGP too because I believe he watches over the operations. Many police stations and posts have amassed wealth during curfew time.

To some, it is an advantage that people fail to maintain SOPs including curfew. This is because, in one night, they will be able to collect a whole month’s salary through bribes. Senior commanders in Kampala Metropolitan are probably being paid off by bar owners to provide protection at the gates of their bars and then the government thinks maintaining SOPs will work?

How can we ask ourselves why cases are surging yet some police officials are the cheerleaders? In which country is the IGP and his deputy living if they are not aware of such things? Sitting in a convoy and being chauffeured from point A to point B on a clear road seems to make them think all is well.

Let us take an example of Kale Kayihura who used to create time and disguise as an ordinary citizen and hit the ground. That is how he kept officers in check and some hated him for that. As for Atwine, I'm focusing on her as an individual because she is the permanent secretary. I will not drag the entire ministry into this because I know there are real officials doing their job right.

Dr Diana, your actions and inactions make one want to believe that you are fooling the president and Ugandans and only wanting to make the COVID-19 situation become a money-siphoning venture. Every time we talk of lockdown and SOPs, a budget is attached along. A very big budget of taxpayer money and added borrowing.

We all agree that COVID-19 exists and it is deadly but how much effort have you put in sensitizing Uganda about vaccination (leave alone sensitizing about earlier SOPs)? Do you want to blame Ugandans for not turning up or is it your inactions?

What is so hard about telling the president the truth or at worst convening a press conference and saying that police are letting down the ministry of Health?

That way, shaming police would give you an advantage in managing the situation better. But your inactions have now bred to the spread of more viruses.

You keep talking about the increase in infections and entry of new variants but you do not talk about the catalysts. Why? Your inactions. If Atwine can not handle this situation with boldness and transparency, she needs to resign with immediate effect. If the IGP and his deputy too cannot watch over the deployments of their directors, they need to ask to be reshuffled or resign.

The author is a market intelligence and strategy expert. He is also the founder and CEO of Young & Free International.

Unmasked, Non socially distanced security officers will move through crowded, unmasked crowds to go arrest someone driving alone from his office at 10pm.

The lone driver is causing more covid than the masses the officers were with earlier in the day. Again, covid is real and dangerous.
Report to administrator
-1 #2 Wante Martino 2021-06-04 08:09
belguin you have missed the point here, Dr. Atwine as Permanent Secretary is the MoH Accounting Officer, therefore it is not her work to sensitize nationals about COVID, the Ministry has several people to do that work
Report to administrator
+1 #3 rubangakene 2021-06-07 18:18
Dr. Atwine is the 'hands-on' technocrat in the Ministry, the person on-the -ground, so to speak.

She advises the Minister on most issues affecting that Ministry and therefore liable for any debacle in that Ministry. She should take the "first stick" in my opinion.
Report to administrator