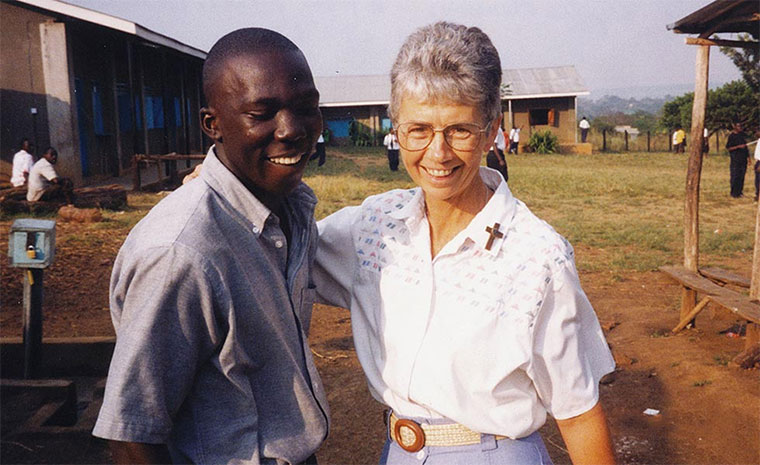 The year is 1993. The holy cross congregation decide it is time to start a school in the mighty Wanyange village that can offer quality and affordable secondary school education to the mostly impoverished young people of Wanyange and the neighbouring villages.

Sister Mary Louis Wahler, offers to become the head of that imaginary school. She identifies an abandoned room covered by bushes in the same compound of the then Wambuuza primary school and decides that room will host the secondary school.

She finds a beautiful and highly inspired young lady - Jennifer Bakibinga Bateeze - who has just completed her diploma from a national teacher training college. She shows her the bushy structure, convinces her to be one of the teachers and verbally appoints her the deputy headmistress of the imaginary school.

Also, those whose parents were too attached to the Catholic Church felt compelled to support a school they called their own. The school was, therefore, initially for what I usually refer to jokingly as ‘rejects’ or a last-resort school for students who could not be admitted in the regional elite schools. It was little wonder, therefore, that some of the pioneer students showed up in slippers and others in dirty and torn pairs of shorts to start their secondary education.

When filling in the forms for choices of schools to join after primary school, I remember my classmates bursting into a loud and prolonged laughter when I innocently joked that I did not have to fill in the forms since I was planning to join Lake View.

Before the Uneb results of the pioneer class came out, it seemed such a big joke and a sign of lacking sufficient inspiration to consider pursuing secondary education through Holy Cross Lake View.

Not many took the school very seriously until 1997 when the UCE results came out and Lake View emerged 50th in the nationwide performance rankings.

Since then, the school that was once conceived to provide affordable secondary school education to the local community would become very competitive to the extent of regularly dwarfing the historical schools in the region such as Busoga College Mwiri, Jinja College, Kiira College Butiki, Wanyange Girls, M.M Wairaka College and Jinja SS. To-date, any listing of the best five schools in Busoga region that does not include Holy Cross Lake View is an invalid one.

Suddenly, we are in 2021 and Sister Mary will be returning to the USA in a few weeks - most likely for good - after 54 years of dedicated service. Journey mercies and best of luck in all her future endavours.

While playing a central role in founding Holy Cross Lake View will remain the biggest highlight of her committed services, she touched many people’s lives in special ways. In addition to being a very hardworking headmistress, she was a caring and loving parent to many.

Sr. Mary was always patient to students who struggled to pay school fees. She started a program whereby the students who could not afford to pay the full amount had their school fees significantly subsidised in exchange for part-time work during the weekend and school holidays.

Many students - including yours truly - would never have completed secondary school without her initiative. Perhaps, the best way to sum up her kindness to poor students is through a Facebook post by one of the pioneer students - Ali Steven Mukwaya - who confessed that if it were not for Sister Mary’s kindness, he would now be selling bathing sponges in his hometown.

In addition to her commitment to ensuring quality education, Sr. Mary paid a lot of attention to discipline. She created a culture of discipline at school that whether you joined as a new student or teacher, you immediately soaked into the culture by default.

Both on and off campus, Sr. Mary always encouraged students to behave in a way that best represented the values of Holy Cross Lake View. It is little wonder that we were always the subject of scorn by students from other schools that referred to us as priests and nuns.

The author is a social worker.

+3 #1 Brenda Sempungu Naka 2021-05-25 23:54
Thank you Sister Mary Louise for the tremendous work done for the Ugandan child, may God bless you and grant many years of good health and blessings.

You believed in me, when you called me to your office and encouraged me to contest for the post of head girl in 1999. And your dream came true. Thank you for your inspiration. Thank you For for this article. It brings back memories!
Report to administrator
+2 #2 Gidudu Brian 2021-05-26 06:45
I will not say I was an easy one to change. I showed up for my first day in a red T. Shirt and brown boots.

She invited me to her office and told me I looked like a beautiful red flower amidst the pearly whites. With a smile she she said, " I love red, but you need to be in white"....no chiboko, no scorn just care and understanding.

Safe journey sister Mary.
Report to administrator
+3 #3 Akampamaani ronald 2021-05-26 08:16
Sister Mary Louis you have not only done tremendous work for the people of Wanyange but also you have touched the souls of many especially those from poor families but with academic confidence and still you have been a parent who groomed many to transform this country to greater heights socially,politically,economically and as the school Motto goes”education for service “ many have proved that the school motto to be relevant
Report to administrator
+1 #4 Zaitun 2021-05-27 16:45
"Sr. Mary always encouraged students to behave in a way that best represented the values of Holy Cross Lake View. It is little wonder that we were always the subject of scorn by students from other schools that referred to us as priests and nuns."

Simply be proud of what she has done for you, your friends, the village or the region rather than listening to those children who, because their parents empty whole Banks, Parastatols, Ministries etc. so as to offer them soft life.

Be assured that most if not all the good Secondary Schools in the country are the fruits of Catholic and Protestant Missionaries, if not, Uganda would be one of the countries lagging behind in education, leave alone in health services.
Report to administrator