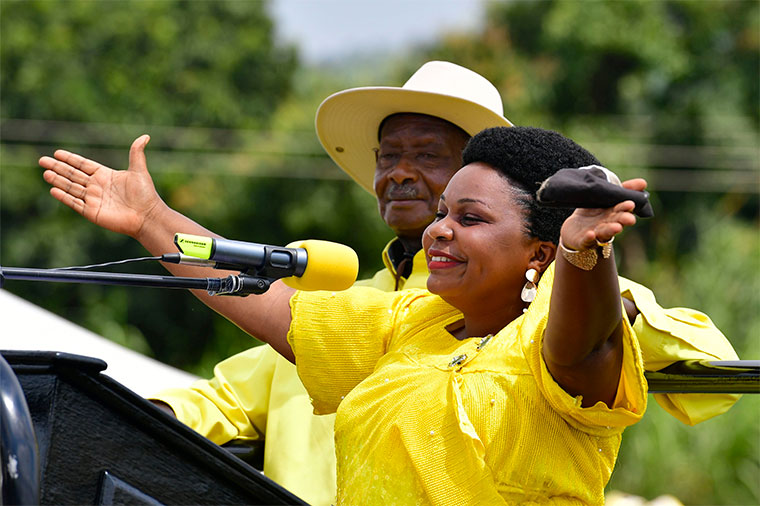 Museveni is one of the preachers of pan-Africanism

One of the most attractive concepts among black African elites is ‘Pan-Africanism’.

Its appeal mainly arises out of its emotive connection with black identity and its evocation of painful memories of all that has happened to the black person ever since we came into contact with people from outside Africa. It attracts trans-border solidarity, held together by common colour and related histories.

In earlier years of pan-Africanism, when the likes of Du Bois, Senghor, Nkrumah, Nyerere, Kaunda told us about the need to unite as ‘black people’, the urgency was felt. Negritude, with all its valorisation of blackness, made immediate sense – attracting an orthodoxy that was easy to preach all across the black world.

Though differences set in along the way and immensely crippled the wave, pan-Africanism has somehow lingered on into the 21st Century in various forms. The danger with everything attractive is that, if not well guarded, it soon gets overtaken by fakes. Even in the world of merchandise, almost every good product has a couple of duplicates in its shadow. And fakes often out-scream the genuine, quickly becoming more popular among the gullible and those of low means due to their ‘affordability’.

This has been the fate of pan-Africanism among some African leaders. It has turned into a buzzword to be thrown around every time they are critiqued or confronted about their excesses.

Here is where one may ask: What sense should we make of President Museveni’s recent outbursts against ‘foreign actors’ and proclamations of being pro-Africa? Is this a pan-African proclamation that we should rally behind and celebrate? What should we make of his bashing of the International Criminal Court (ICC) on his 2016 inauguration?

It would be crucial to read all these outbursts and assurances within the context of their assertion. While the statements might be appealing in themselves, what motivates them? Why are they uttered in those particular circumstances?

Western bashing majorly takes on two shades: one, those that speak back to the ‘West’ simply for its unnecessary and patronising interference in African affairs. Two, those that tell off the ‘West’ and draw on pan-African sentiments only when the latter talks about their excesses at home (Africa).

I would refer to the latter category as pan-Africanists by convenience or opportunistic pan-Africanists. While they might hold some genuine records in fighting imperialism, they cleverly use this as a curtain to cover their anti-African acts. Pan-Africanism becomes that house they run to every time they are confronted for their ugly side.

It is not new to Africa that when leaders develop excessive tendencies in protection of their grip onto presidency, they tend to heighten their pan-African rhetoric. Their life presidency schemes are shrewdly dressed up in pan-African robes. We saw it in the last years of Idi Amin, Mobutu, Gaddafi, Mugabe, etc. Yet many of the same people are in bed with the ‘West’ when it is silent or supportive to their dictatorship.

I like using the analogy of a man who batters his wife and children, but a very quick to cry interference when neighbours threaten to take action to save his children from him. As though to say, ‘as the father, I am entitled to my violence against my family’.

No outsider (foreigner) should lecture me about how to treat my family. To him, a good neighbour is like the African Union – the club of like-minded peers that just looks on indifferently as he brutalises his family.

There is indeed so much that the ‘West’ does against Africa through double-dealing. Many of the weapons used by African governments to intimidate, kill and mime African dissenters are supplied by the ‘West’. In many of their dealings with Africa, their interests are primary. It is rarely diplomatic altruism. They facilitate the oppressors as their mouths condemn the same. They will dismiss elections as totally undemocratic yet attend the endorsement of outcomes, in the name of not spoiling diplomatic relations.

Nevertheless, when your government is oppressive, it becomes difficult to appreciate foreign threats. It is partly the reason why even when government tagged Bobi Wine as a project of foreigners, few Ugandans cared. Even if it were true, it was a choice between two evils. And, in the immediate, people need jobs, food, healthcare, education, freedom, hope … Nationalism is only a means to these ends, not an end in itself.

If Western powers came back to colonise African countries, I doubt that many ordinary Africans under dictatorships would be bothered. Some people have had it real rough in the hands of ‘their own’ and may not mind whichever colour or origin delivers. By deed, tragically, a couple of African leaders have made colonialism attractive.

What patriotism or pan-Africanism lectures would make sense to the hundreds of desperate young boys and girls filling our airport on a daily to run out of frustration in Uganda into disguised slavery in the Middle East? What rhetoric of telling off the ‘West’ can they relate to?

On the contrary, many are praying for a chance to flee to those countries for survival. Pan-African speeches from rulers presiding over greedy kleptocratic governments that hardly care about the plight of struggling masses are just painful hypocritical noises to listen to.

The best pan-African leader is one who, in the first place, ensures that there is equity in distribution of national resources, that his people access good healthcare, education, have hope for their future, security, employment, and freedom to express their desires and choices. Short of this, pan-African proclamations are full of emptiness.

+2 #1 Lakwena 2021-05-19 12:36
In other words Dr. Ssentongo, in my wildest opinion, there was no colonialism nor imperialism. It was just a clash of civilization and/or interests.

In other words, there was no independence (Not Yet Uhuru). Simply because, under our current Tibuhaburwa, we are now worse off, under a domestic colonialism (sic) imperialism characterized by: tribalism, nepotism, social segregation especially in scholarship/education, tokenism vis-a-vis marginalization, cronyism, etc.

E.g. the imperialist courtesy of Gen Aronda [RIP]). when he said that: the Banyankole are the most qualified to rule Ugandans.

Otherwise the driving force behind so call anti-colonialism and liberation debacles (going to the bush), were simply driven by nuggu (sic) the contentiousness of the white man's apparent soft and sophisticated lifestyle (civilization).
Report to administrator
+2 #2 Lakwena 2021-05-19 12:43
E.g. who can deny that it is a naked day-light sectarianism/nepotism that: the Executive Director of UNRA is Allen Kagina and at the same time the Director of Roads and Bridges is Eng. Samuel Muhoozi.

Unless of course Samuel Muhoozi is coming from Katakwi, but with the wrong name.
Report to administrator
+2 #3 Remase 2021-05-19 13:08
This all boils down to overstay in power. We could right on water, however nothing will ever change as long as M7, who considers himself the only patriotic individual who cares the most about Uganda and Africa, is still in power.

All hope has vanished in Uganda and boys and girls are investing their hope in self slavery in the Middle East! Until we unit and sacrifice together as a nation, nothing will ever change.
Report to administrator
+2 #4 Ferdinand 2021-05-19 22:50
We had Dr Kihura Nkuba as one of those that sounded genuine about panAfricanism.

Of late he’s also been swallowed by the Museveni monster and speaks in tongues about the government’s dictatorship. Wasted brain. Greed
Report to administrator
+1 #5 Jama 2021-05-20 15:26
Patrice Lumumba ,Kwame Nkrumah, Nelson Mandela, Jamel Abdel nasser, Thomas Sankara and some others were true pan africanists.

As for our famous liberator, this is an imposter claiming that the image on the portrait is his own, yet they don't resemble.
Report to administrator
0 #6 kabayekka 2021-05-22 11:56
Mr. Jimmy Spire Ssentongo had me nearly lost my mind when he wrote pun instead of pan on the well known word of Africanism.

But thanks to google. the meaning for me is now clear. pun means; a joke exploiting the different possible meanings of a word or the fact that there are words which sound alike but have different meanings.

And then we have the meaning of Pan as: In ancient Greek religion and mythology, Pan (/pæn/; Ancient Greek: Πάν, romanized: Pán) is the god of the wild, shepherds and flocks, nature of mountain wilds, rustic music and impromptus, and companion of the nymphs.

He has the hindquarters, legs, and horns of a goat, in the same manner as a faun or satyr.
Report to administrator
0 #7 kabayekka 2021-05-22 13:00
Even in the Pan-African country of Uganda, where the much loved President, Idi Amin ruled with his own dictatorial constitution, that phrase of "a life President in Uganda", became impossible and caused this country to go through several successive brutal civil wars.

Nowadays when Uganda and Parliament is ever in the habit again of formulating legitimate life Presidents(rulers to die in state office) one hopes the legal fraternity and all responsible are well equipped for another civil war over such a simple matter of breaking the law of the land.
Report to administrator
0 #8 kabayekka 2021-05-22 13:09
African societies must come to an understanding that some people do love their leaders very much and others do not like that leader.

That is not breaking the constitutional law of the land one bit. And the constitution does not allow such intentions of aspiring leaders of this country to continue to stay put in power for ever more and afterwards if they have to die they must die in State office!
Report to administrator
0 #9 Danick 2021-05-25 08:45
They go to the Bazungu to get weapons which they use to kidnap and murder supporters of their political opponents.

Yet at the same time accuse the opposition of being the ones inviting the bazungu. Such hypocrisy!
Report to administrator