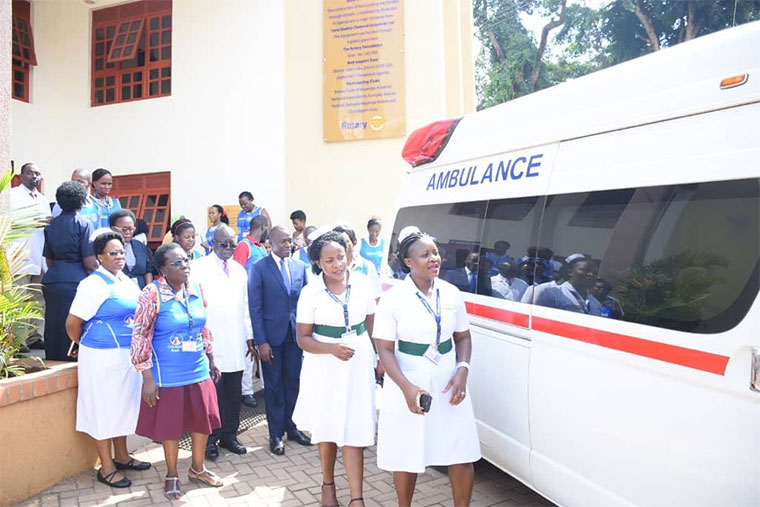 A few weeks ago, I wrote here about my neighbour, Christine, who was helplessly battling cancer, and her earlier challenges trying to access treatment from Uganda Cancer Institute (UCI).

Her sad story could in many ways be a reflection of what happens in other sectors of Uganda’s health system. Around 2016 and 2017, I wrote and drew a lot about the shocking revelation that the country had only one radiotherapy machine, which had also broken down and taken ages to be replaced. It was around this time that we had the emotive case of the late Carol Atuhirwe, a young lady that was fighting throat cancer.

Her case and, earlier, that of the late NTV news anchor, Nankabirwa’s Nankabirwa, brought Uganda’s cancer care in the spotlight.

A few interventions followed in each case, the government ones mostly resulting from public pressure – not a non-reactive sense of responsibility and care. In Rosemary’s case, having failed to save her life, her fans mobilised funds to put up a shed at UCI to shelter the many patients that used to spend hot days and cold nights waiting outside for their turn to access treatment.

When I visited the place last week, the small shelter was full and many miserable patients were still outside on verandas
and on the compound. It is a painful sight, especially considering that many who end up in such desperate spaces are the poor that cannot afford private rooms.

My idea is not that all people should be able to get the same kind of care. While that is desirable, I know that it would be hard
to achieve. But, at least, let there be some degree of decent care for all. No citizen should die like a marabou stock on a rubbish heap simply because they are poor.

Following the case of Carol, and the noise prompted by government’s dillydallying in procuring another radiotherapy machine, there was some intervention in expanding radiotherapy care. I was not able to establish how this is working now. I also learnt that the institute has been growing, and that it is better than it was five years ago.

Before I go into expressing my reservations, on grounds of what I saw last week and what I have learnt from some doctors at Mulago, it would only be fair to start by appreciating the health workers who are trying to serve amidst so many systemic challenges. By all signs, the institute is overwhelmed by patients. There is only so much it can do.

While internal challenges of corruption and other cases of unethical conduct make the situation worse, I think many of these arise out of government’s REFUSAL to give due attention to the health sector.

If only Health received as much or even just close preferential treatment as ‘Security’, we wouldn’t have lost as many lives as we do. Cancer wouldn’t always mean a death sentence in Uganda.

My neighbour’s cancer was diagnosed at its last stage, when nothing much could be done. I found out that Christine was ill after her first visit to Mulago. She had been struggling with bleeding complications for a while but had avoided going to UCI, having heard of gory tales of agony in queues and the expensive medicines she knew she couldn’t afford.

When she was finally pushed by the intense pain to go there, she told us she had to part with 800,000/ in total. I didn’t get to know what all this was spent on. This woman’s monthly income could not have been beyond 200,000/. In any case, she had abandoned her small roadside popcorn business for over three months of illness.

Which poor person will go to seek specialised care after hearing of such stories? They will just decompose in their houses, at the mercy of herbal trial and error.

After her first experience at UCI, it was a hell of a task convincing her to go back. Things only became a bit smoother when we got to know some doctors at UCI through our contacts.

How about a poor cancer patient travelling all the way from Koboko or Kapchorwa with neither money nor social networks! Is government interested in the sorrows of such underdogs?

The last time Christine was taken to the institute, she had deteriorated to semi-consciousness. When I visited, I found her on the floor of one of the general wards.

All the beds were full. She wasn’t the only one, there were many others between beds - waiting for other patients to either be discharged or die for them to get a bed. What do the doctors do? Is it their fault that for all these years we can only talk of one national cancer treatment center as a country?

A prescription had been provided, a dose was at Shs 500,000/- at a nearby pharmacy. A day later, doctors advised that Christine be taken back home, as she was at the terminal end. A few hours upon reaching their single room home, the landlord arrives shouting: “Get her out.

She shouldn’t die in my house”. In the middle of this heartless madness, she breathes her last. The landlord gets even more incensed upon learning that she has died. “Get her out”, he raises his voice.

I returned home late that night, only to learn that the vigil was at a community health center, where the orphans had sought refuge with their mother’s body. Such is the fate of the poor in a society that is sinking deeper and deeper into greed, selfishness and insensitivity to others’ pains, from the top to the grassroots.

The story of Christine’s last days is not very unique. It characterises a lot that goes on in the ‘Pearl of Africa’, where over 99 per cent profess belief in God.

I hope Christine finally finds some rest, and that we overcome some day.

In other words, the guy started by attacking Police posts and killing innocent police officers who where doing their job,

Where were you in 2015, when Gen Tibuhaburwa gloated to the people of Mayuge, how, while breaking the law (armed rebellion) he and drive murdered an on-duty UNLA soldier at a roadblock?

What would you, Gen Tibuhaburwa and think alike say if e.g. tomorrow, Gen Kainerugaba Muhoozi is murdered at a Roadblock, by some subversive reactionary and his driver?

Just asking.
Report to administrator
0 #42 Lakwena 2021-05-04 08:27
In other words JB, you can't just quit. I though you are tenacious enough to withstand Remase and Wooden's bile and barbs.

Otherwise, who will defend the Bahima's achievements from the jealousy and covetousness of the lazy, illiterate and bankrupt Lakwena of this country?
Report to administrator
+2 #43 Ferdinand 2021-05-04 09:45
Lakwena, you think John B and Winnie are two different people?

No. It is the same person shedding skin. Whenever he is unmasked he goes back for a different mask.

The current clothes are now too dirty for him, he wants to go and change. Maybe he will come back as Cissy.

This is a very difficult regime to defend. You can't defend a killer and you expect that the victims will clap for you. All that JB needs are directions to hell
Report to administrator
+1 #44 Wooden K. 2021-05-04 11:33
QUOTING Ferdinand :

"... no right to spew endless garbage that fills the entire space making it hard for readers to find other sensible comments"

It is called RATIONAL POLLUTION.

Very annoying and especially repellent if the junk is off topic.