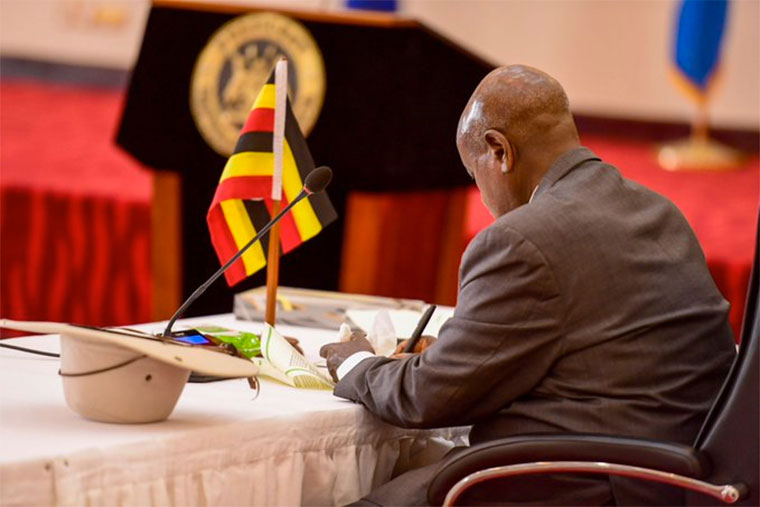 Currently described by the World Bank as the hottest inland exploration frontier in the world and the country to watch in the oil and gas, Uganda has discovered 6.5 billion barrels of oil.

As Uganda begins the final journey to historical production of oil and gas, the failures and weaknesses of earlier problems particularly the construction of an oil refinery that commenced in 2012 should not be forgotten but, rather, drawn lessons to make the process of doing the EACOP project fair and transparent.

It is important to remember that the EACOP project passes through 10 districts and crossing so many areas of natural importance that are fragile and need to be treated and handled with utmost care.

The process of constructing the EACOP should adhere to the law particularly article 26(2) of the constitution of the Republic of Uganda, 1995 as amended to the effect that no person shall be compulsorily deprived of property or any interest in or right over property of any description except where the following conditions are satisfied.

The major oil players should and must look at including everyone before key decisions on environment and investments are made. Many other key points like meeting international standards, global warming, agriculture, accumulated debt to find the project among many others, should be given serious consideration.

I urge the governments of Uganda, Tanzania and all major players to track back and take precautionary measures on whether the impacts of oil development and production outweigh the rights of people and areas of natural importance like lakes, rivers, parks, etc.

Development is important but the inherent rights of citizens must be given priority. The question whether it’s a milestone deal for all involved depends on the mitigation of negative impacts and threats they pose.

Time for Ugandans to market Uganda

It has been a year now since the Covid-19 pandemic spread to Uganda. This global and deadly pandemic brought almost every livelihood to a standstill and among the most hit was the global tourism sector.

Employees in the tour and travel companies were laid off, employers were evicted from offices due to rent arrears accumulation, airports and air transport shut down, hotels and tourist accommodation owners chocked on loans, tour vans were parked, among many others.

Uganda is a country unequivocally “gifted by nature.” Uganda has 10 national parks, 12 wildlife reserves and 13 wildlife sanctuaries. Ugandans should visit and market these sanctuaries and reserves.

There is no doubt that domestic tourism is still low but it’s passable and, therefore, can cushion the effects of the pandemic as the country waits for the international tourists. The government should open all the entertainment festivals including bars on the condition of hosting all these events in the tourism accommodation centres.

The heavy reliance on these international visitors has been challenged by the existing pandemic. Therefore, Ugandans working in the tourism sector should now embrace virtual tourism.

Organise virtual exhibitions showcasing the incredible beauty of Uganda’s scenery, diverse cultures and rare animals inhabiting the Pearl of Africa using the available technology resources. This will increase awareness about Uganda and her endowments.

Ministry of Energy should amend the outdated Electricity Act

It should be noted with concern that the Electricity Act 1999 has weak punishment for those who steal power.

As much as there was a creation of the Utilities, Standards and Wildlife court by the judiciary, which is supposed to prosecute culprits involved in stealing of utilities such as power, the Electricity Act is weak in punishing culprits.

Power theft, illegal connection and vandalism in Uganda are rampant crimes where wires are left exposed which at times lead to electrocutions. This practice has been ongoing for quite a long time which leads to loss of revenues and investment.

Section 88(1) of the Electricity Act 1999 imposes a penalty of thirty currency points or two years’ imprisonment or both to anyone who steals power.

Over the years, ERA, electricity distribution companies, stakeholders and electricity consumers have come up to state that the challenges in the electricity sector are attributed to the out-dated Electricity Act 1999.

On top of power theft, electricity sector is facing other challenges like high power tariffs.  It should be noted that affordable and reliable electricity can drive economic production, has the ability to increase the country’s tax base, can enhance the competitiveness of our goods and can increase our export earnings.

Why power discussion is central

Health inequity consideration arises from social and economic conditions, most of which are unfair but also avoidable.

Health care pertains to downstream curative approaches which are narrow in scope. Health is the general wellbeing, and it depends on social, economic, and environmental determinants, whose resource distribution is moderated through public policies.

How these resources are produced and distributed across the population defines inequities in health. For example, the closure of schools and workplaces during the pandemic and subsequent failure for parents to feed or pay fees for their daughters to return to school contributed to a national teen pregnancy crisis.

For health equity to materialize, society should question imbalances in the distribution of power and privileges in a way that paves way for equity public policy - itself a social determinant of health.

The chronic and pervasive corruption and violence against the people disempower citizens from holding their state managers accountable for inequities in their health experiences. When people feel that they have no voice in how their society should be managed, their input in the public policy processes diminishes to their own detriment.

Today, very few Ugandans can seek accountability for failures of government to deliver services relevant to health. Take, for instance, we all know the importance of education and early childhood development, accessible healthcare services, employment and working conditions, infrastructure and built environment, etc., have on the health of every community.

These services are often delivered within a community, requiring community input in ensuring that they are made accessible and culturally relevant.

Without the political clout and community voice, the government has felt no obligation to elevate these services to an acceptable level rather than divert service delivery to the private sector. Social services are constantly on the decline among the poor majority, indicating a loophole in the policy processes, but also a strong favor for the market orientation.

Lastly, health equity has been redefined and Ugandans should see it for that. The true meaning of health equity is that individuals, and not the government, should cater to their needs using out-of-pocket resources, which is driving families to catastrophes.

The idea that healthcare is the solution to poor health is untrue. We must escalate investment in a socio-politically empowered community and in their public health systems.